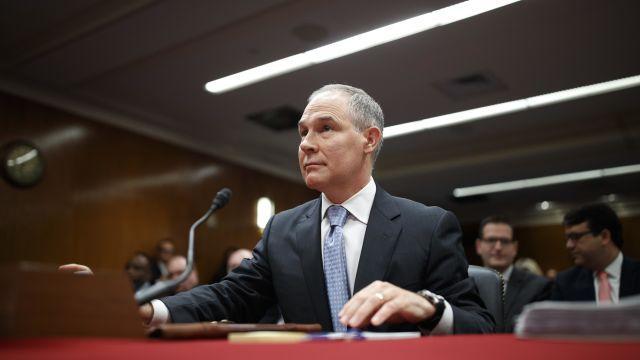 WASHINGTON — A federal appeals court ordered the Environmental Protection Agency on Thursday to bar within 60 days a widely used pesticide associated with developmental disabilities and other health problems in children, dealing the industry a major blow after it had successfully lobbied the Trump administration to reject a ban.

The order by the 9th U.S. Circuit Court of Appeals came after a decadelong effort by environmental and public health groups to get the pesticide, chlorpyrifos, removed from the market. The product is used on more than 50 fruit, nut, cereal and vegetable crops including apples, almonds, oranges and broccoli, with more than 640,000 acres treated in California alone in 2016, the most recent year data is available.

In March 2017, just a month after he was confirmed as the agency’s administrator, Scott Pruitt rejected a petition by the health and environmental groups to ban the pesticide. He did so even though the agency’s own staff scientists had recommended that chlorpyrifos be removed from the market, based on health studies that had suggested it was harming children, particularly among farmworker families.

A three-judge panel, on a 2-1 vote, gave the agency two months to finalize the ban on the product, whose leading manufacturer is DowDuPont. The company, along with others in the pesticide and agriculture industry, had intensely lobbied the EPA and Pruitt, who resigned under a cloud of ethics scandals last month.

The agency offered no clear response Thursday when asked how it would respond to the order, other than to point to what it said were remaining questions about one of the studies cited in support of the ban, a Columbia University examination of health effects on children in New York City when the pesticide was used to combat insects in apartment buildings.

That and two other studies mentioned in the agency staff recommendation examined the development of children whose mothers had been exposed to chlorpyrifos during pregnancy, either in apartments in New York or in agricultural communities where the pesticide is used in California. The effects on children included lower birth weight and reduced IQ, with farmworkers also reporting loss of working memory and other health consequences that at times resulted in hospital admissions.

The agency could ask the full 9th Circuit to reconsider the ruling or appeal it to the Supreme Court, while perhaps asking for a delay in the order that it ban the pesticide. Alternatively, the agency could move ahead with the ban.

The court ruled that there was “no justification for the EPA’s decision in its 2017 order to maintain a tolerance for chlorpyrifos in the face of scientific evidence that its residue on food causes neurodevelopmental damage to children,” referring to the formal agency process of banning a pesticide. Judge Jed Rakoff of the U.S. District Court for the Southern District of New York wrote the majority opinion, as he was sitting on the 9th Circuit for the case.

Environmentalists and public health advocates celebrated the ruling, which came in response to a lawsuit they filed last year after Pruitt rejected the ban, a decade after they had first filed a petition with the agency calling for chlorpyrifos to be removed from the market. The court had earlier set a March 2017 deadline for the agency to act, but it had not previously ordered any specific outcome by the agency, a move it has now taken.

The pesticide had previously been banned from most commercial uses in households as an insecticide but was still legally used to combat insects on farms.

“Finally, decades of poisonous exposures and harm to children and farmworkers will end,” said Marisa Ordonia, a lawyer at Earthjustice, an environmental group that handled the legal work on the lawsuit. “EPA’s shameful history of putting industry cronies before the people they are supposed to protect is over.”

Erik Nicholson, the national vice president of United Farm Workers of America, said the court order would mean better protection for farmworkers from California to Florida.

“The EPA has put the women and men who harvest the food we eat every day in harm’s way too long by allowing the continued use of this dangerous neurotoxin,” Nicholson said in a statement. “We commend the court for doing what EPA should have done years ago. The people who feed us deserve a safe and healthy workplace.”

DowDuPont and CropLife, the pesticide industry’s leading trade organization, have both disputed that chlorpyrifos, if used properly, poses any health threat to farmworkers, their families or consumers eating fruits and vegetables onto which it is sprayed.

“Chlorpyrifos is a critical pest management tool used by growers around the world to manage a large number of pests, and regulatory bodies in 79 countries have looked at the science, carefully evaluated the product and its significant benefits, and continued to approve its use,” Gregg Schmidt, a spokesman for DowDuPont, said in a statement Thursday. “We expect that all appellate options to challenge the majority’s decision will be considered. We will continue to support the growers who need this important product.”