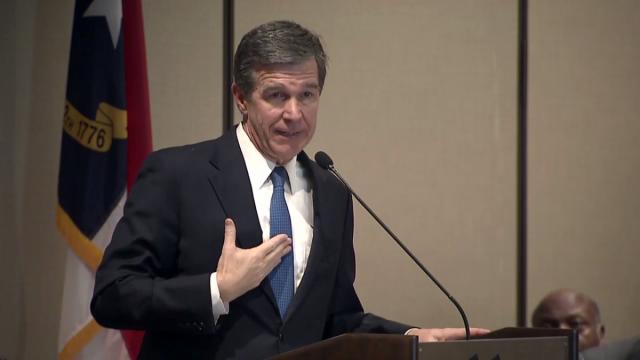 Raleigh, N.C. — A federal judge has issued a temporary restraining order that blocks Gov. Roy Cooper from trying to expand the state's Medicaid program for at least the next two weeks.

On its surface, the order is a standard measure putting both sides on a legal hold until a judge has a chance to weigh in. But it could have long-lasting consequences due to the upcoming change in presidential administrations on Jan. 20.

Medicaid is the state health insurance program for the poor and disabled. States have been able to expand the reach of their program to more people and have the federal government pick up the bulk of the cost under the Affordable Care Act, what some people call "Obamacare."

But legislative Republicans have been skeptical of the potential future costs that come with expansion and have, since 2011, prohibited former Gov. Pat McCrory and now Cooper from doing anything that might further expansion or embrace the ACA. The story is further complicated by both pragmatic factors – North Carolina is in the middle of remaking its Medicaid system – and political issues – President-elect Donald Trump and congressional Republicans have vowed to unwind President Barack Obama's signature health care law.

Cooper campaigned on a promise to expand Medicaid and announced he was willing to defy the legislature and pursue expansion on his own almost as soon as he took office. This is one of several areas where Cooper and legislative Republicans are at loggerheads, despite pronouncements from both sides earlier this month promising cooperation.

Federal officials in the outgoing Obama administration pledged quick action on Cooper's request to expand North Carolina's Medicaid program. However, with that effort put on hold, it seems unlikely the court will resolve this case before the Trump administration takes over next Friday. The new Republican administration would be poised to give Cooper's application a hostile reception.

"Unfortunately, our multiple attempts to amicably convince Gov. Cooper to follow the law have fallen on deaf ears," Berger and Moore said in a joint statement Friday. "Cooper's brazen decision to press on with his unconstitutional Obamacare expansion scheme and ignore the General Assembly’s constitutional role to make laws requires swift legal action."

The legislative leaders also took issue with Cooper's hiring an Obama administration official responsible for overseeing Medicaid to run the state's Department of Health and Human Services, saying it smacked of a coordinated effort to somehow rescue the ACA.

The restraining order issued Saturday night does not say when a hearing will be held in the case.