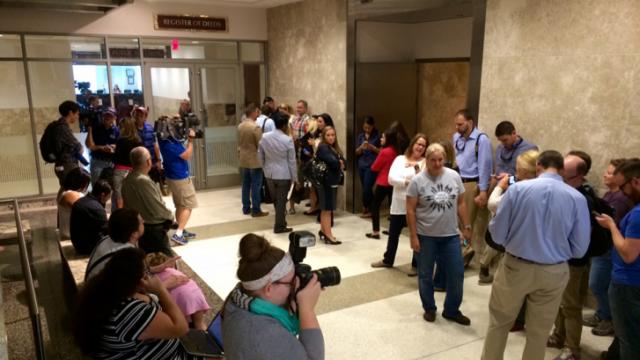 Senate President Pro Tem Phil Berger and House Speaker Thom Tillis contend in the filing, in part, that the federal court doesn't have authority to tell states what to do with marriages. They have asked for oral arguments on the matter.

The move comes days after the 4th U.S. Circuit Court overturned a similar ban in Virginia after the U.S. Supreme Court on Monday refused to hear an appeal challenging that decision.

Berger and Tillis sought to delay or block what many believe could be an imminent ruling allowing same-sex marriage in the Tar Heel state.

Other points they make in the filing:

In an order late Thursday, Osteen rejected the Republican leaders' request to delay a decision on the matter until at least Oct. 17.

"These cases have been pending for a lengthy period of time," Osteen wrote, adding that lawmakers haven't offered any legal argument in favor of the gay marriage ban that the 4th U.S. Circuit Court of Appeals hadn't already set aside when it overturned Virginia's ban this summer.

Osteen has no time frame in which he would overturn the state ban.

Supporters of the ban spoke out in defense of Tillis and Berger's move Friday, saying the two are representing the will of North Carolina voters, who two years ago approved a constitutional amendment – commonly referred to as Amendment One – that defines marriage as being between a man and a woman.

Tillis and Berger have authority to defend the state's marriage ban because of a vote last year by state lawmakers that gave legislative leaders legal standing equal to that of the state attorney general to fight for North Carolina laws in court.

After the 4th Circuit ruling, Attorney General Roy Cooper said he would no longer defend the law.

Tami Fitzgerald, executive director of North Carolina Values Coalition, said the voters deserve to have their arguments heard in court.

"Speaker Tillis and President Pro Tempore Berger are just defending the laws of the state and the will of the people," she said "We applaud their leadership by defending the rights of the voters."

The North Carolina Democratic Party's LGBT Caucus, however, attacked Tillis, who is running for U.S. Senate, calling the move "a desperate attempt" to "revive his floundering campaign."

"Amendment One and its aftermath left many of our communities and even our state divided," said Robert Kellogg, secretary of the caucus.

Meanwhile Friday, gay and lesbian couples waited for a ruling and marriage licenses at the Register of Deeds Office at the Wake County Justice Center.

Among them were Tonya Edge and Amy Litton, together for 13 years.

"We're very positive and hopeful that freedom will be granted to us all, and we would just like to make it legal – just like every other couple in love," Litton.

Register of Deeds Laura M. Riddick has already modified the county's online marriage application from "Groom" and "Bride" to include blanks for "Applicant 1" and "Applicant 2."

Simply Cakes, of Cary, brought a wedding cake for a couple at the Justice Center who works for the sheriff's office, and clergy members were on standby to marry couples should same-sex marriage begin Friday.

"We are starting to see a much more progressive, open, tolerant nation in terms of human rights and civil rights," said the Rev. Nancy Petty, pastor of Raleigh's Pullen Memorial Baptist Church. "I think anytime you make a step forward for treating people equally and ensuring that their constitutional rights are protected, that is a historical moment as well."

For the past two years, the church has performed blessings for heterosexual couples, declining to marry them until same-sex marriage is legalized in the state.

But Petty said that could now change for her congregation.

"Anybody who theologically disagrees with same-gender covenants or homosexuality – they don’t have to change anything they’re doing," she said.

"I think it’s important, in terms of the faith dialogue, for people to be clear about what they believe and to stand by their convictions," Petty added. "But I don’t think it's right for our laws of the land to dictate what individual churches or ministers can do within their own congregation, in terms of this issue."