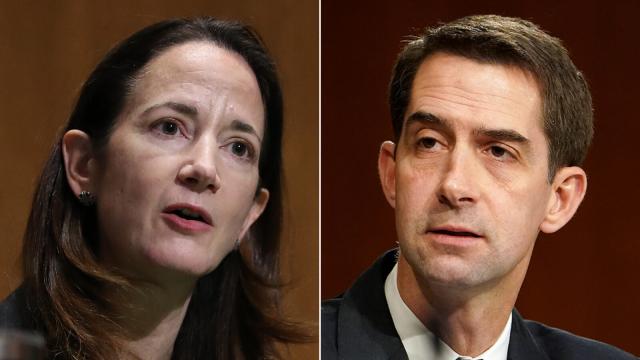 Haines' confirmation as the first woman to lead the US intelligence community, which was approved in the Senate by 84 to 10, continues a recent Senate precedent of confirming Cabinet nominees the day a new president is sworn in, though Biden is getting fewer nominees approved quickly than his predecessors. The Senate confirmed two of former President Donald Trump's on his first day, and even more for former Presidents Barack Obama and George W. Bush.

Biden may struggle to get additional nominees confirmed quickly, as those confirmations could be stalled until Senate GOP Leader Mitch McConnell and Senate Democratic Leader Chuck Schumer cut a deal on a resolution outlining how they'll share power in the Senate, GOP and Democratic senators said Wednesday.

Haines' day-one confirmation was in doubt for much of Wednesday, after Republican Sen. Tom Cotton of Arkansas objected to her confirmation until she clarified an answer during her Senate Intelligence Committee confirmation hearing about the CIA's interrogation program during the George W. Bush administration. Haines responded to a written follow-up question on Wednesday, and Cotton lifted his hold, clearing the way for Wednesday's vote.

Haines will become the first woman to serve as director of national intelligence, taking over an intelligence community that was repeatedly disparaged and sidelined by Trump throughout his four years in office.

In addition to Haines, Janet Yellen to the Treasury Department is another nominee likely to get a quick vote in the Senate, but there still needs to be an agreement to hold votes on the nominations. It remains to be seen when other nominees might be considered.

With the swearing in of Georgia's two new senators Wednesday, Schumer has become majority leader in a 50-50 Senate. But the power-sharing agreement will specify how many Democratic and Republican senators will sit on the various committees -- and will formally allow Democrats to assume the chairmanships of the key committees. Without an agreement, the committee ratios from the last Congress -- when Republicans maintained control of the Senate -- will continue. And that means that Biden will need cooperation from Republicans to begin committee consideration, or he'll have to wait until McConnell and Schumer reach an agreement on the resolution.

"Committees, I think, will be stalled until it's agreed to," Sen. Roy Blunt, a member of Senate GOP leadership, said to CNN.

That raises the stakes for the talks between McConnell and Schumer, which hit a snag on Tuesday when the GOP leader demanded that Schumer take off the table the possibility that Democrats may try to gut the filibuster, which is the potent stall tactic that could derail legislation absent 60 votes. Many Democrats have called for changes to filibuster rules to reduce the threshold to 51 votes, but Schumer lacks enough support within his caucus to invoke the so-called nuclear option to change the rules.

Nevertheless, McConnell has asked Schumer for assurances that the filibuster will be spared, something that Schumer has yet to do. Schumer has called on the Senate rules to mirror the 2001 agreement when the chamber was also initially split 50-50, with both sides holding an equal number of seats on committees and tied votes on legislation and nominations would go straight to the floor.

Until Haines is sworn in, the director of national intelligence role will be filled in an acting capacity by ODNI Chief Operating Officer Lora Shiao, a senior intelligence official told CNN.

Shiao served as COO under President Donald Trump's DNI John Ratcliffe, who has left the job as expected.

Haines pledged at her confirmation hearing to take politics out of the intelligence community, after four years where Trump was constantly clashing with the intelligence community and accused the so-called "deep state" of undermining his presidency. In a sign of Biden's prioritizing her role, he named Haines as his DNI pick well before selecting a CIA director, and he is not keeping the CIA post as a member of his Cabinet like Trump did.

"Given the critical importance of the role of the director of national intelligence to our country's security, it is appropriate that Avril Haines has now become the first member of the new administration to be confirmed by the Senate in an overwhelmingly bipartisan vote," said Democratic Sen. Mark Warner of Virginia, the incoming Senate Intelligence Committee chairman. "After being deliberately undermined for four years, the Intelligence Community deserves a strong, Senate-confirmed leader to lead and reinvigorate it."

Cotton said Wednesday that he also wanted Haines confirmed quickly, given her important intelligence role. But he said he was concerned with Haines' response to a question from Oregon Democratic Sen. Ron Wyden about accountability inside the CIA over the Bush-era interrogation program that included the use of harsh tactics like waterboarding.

Following a review of the Senate Intelligence Committee's "torture report" in 2013, Wyden noted at Wednesday's hearing that the CIA recommended broadening accountability reviews to include "systemic failures in accountability for individuals who were responsible for the failures."

"Do you agree with this recommendation, and if you are confirmed would you seek to apply it to the intelligence community?" Wyden asked.

"Yes, senator, I agree with the 2013 recommendation that the Central Intelligence Agency indicated and to broaden the approach of accountability review boards that the report identified," Haines responded.

Cotton, who did not question Haines during the open hearing Tuesday, asked Haines to clarify her answer during the Senate Intelligence Committee's subsequent closed session, he said. He submitted a question in writing afterward.

"During the subsequent closed session, you clarified that, if confirmed, any changes to the structure of accountability review boards or other administrative procedures would be forward looking, and that you would not re-litigate the conclusion of the CIA review into the rendition program or the Obama Administration's closure of related investigations," Cotton asked Haines. "Can you confirm that you will not reinvigorate efforts to prosecute, take administrative action against, or prejudice in any future promotion or selection panels any CIA officer involved with that program under DOJ guidance and Presidential direction?"

Cotton said he received sufficient assurances from Haines to lift the hold on her nomination. "I'm ready to vote on this nomination," he said.