While the US is focused on the election, the COVID-19 pandemic keeps growing 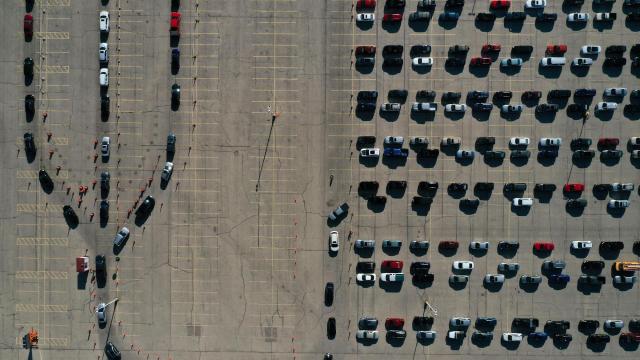 CNN — This week, as voters cast ballots and waited to see who would clinch the White House, the COVID-19 pandemic largely fell out of view.

But the coronavirus continued to spread, in some places at a higher rate than ever before.

The US broke one record after another.

Patients flooded hospitals, and thousands died. Officials across the country implemented more restrictions to get the virus under control.

Here's what happened this week in the country's fight against COVID-19.

In a pandemic full of grim milestones, the US hit another key marker.

On Wednesday, the US recorded more than 100,000 new cases in a single day for the first time, according to data from Johns Hopkins University.

The country shattered that record a day later, recording 121,888 new COVID-19 cases on Thursday, according to Johns Hopkins.

On Friday, the US broke the record yet again, reporting more than 126,000 new cases.

Over the last week, the US added a record-breaking total of 689,538 new COVID-19 cases, Johns Hopkins data show. As of Saturday morning, more than 9.7 million cases have been reported in the US.

"It is everywhere," Ohio Gov. Mike DeWine said Thursday. "We can't hide from it. We can't run from it."

The records set this week were a stark reminder of the fall surge going on throughout the country, one experts warn will be the worst yet.

The 12 days with the highest single-day case counts were in the last two weeks. And in the first six days of November, 25 states reported a record high.

By Friday, a week of incredibly high single-day totals pushed the national seven-day average of new cases up to 98,505, according to Johns Hopkins.

DeWine on Thursday said Ohio's spread had "skyrocketed" because of weddings, funerals and social gatherings. The next day, the state reported the highest number of new cases in a day since the beginning of the pandemic, 5,008.

Meanwhile, Kansas Gov. Laura Kelly said her staff was working with community leaders to increase mask use, saying it would protect the elderly and keep businesses and schools open.

"We know how to mitigate the spread of the virus," she said. "We know that masks work."

If most Americans wore masks, it could save more than 130,000 lives, the director of the National Institutes of Health, Dr. Francis Collins, wrote in a blog post Tuesday, calling it a "simple, selfless act."

On each of four days in a row this week -- Tuesday, Wednesday, Thursday and Friday -- more than 1,000 people died nationwide. Among them was a Missouri election judge supervisor who worked at a polling site on Election Day after testing positive and ignoring instructions to quarantine for 14 days.

By the end of the week, the total death toll was 236,073, with an average of 912 reported deaths per day. The last time this metric was above 900 was on August 31, according to Johns Hopkins data.

That number will continue to climb. The CDC's ensemble forecast, which offers projections for a few weeks, projects up to 266,000 coronavirus deaths by November 28.

But more deaths often follow surges in hospitalizations, according to Dr. Christopher Murray, director of the University of Washington's Institute for Health Metrics and Evaluation.

El Paso, Texas, repeatedly beat its record for hospitalizations throughout the week. "It is just a new peak every day," Ryan Mielke, a spokesman for the University Medical Center of El Paso, told CNN Monday.

A fourth mobile morgue was sent to the area this week. By Friday, teams from the Air Force and Army were sent to help at three hospitals after a request from FEMA, US Army North said in a news release.

New Mexico officials warned Thursday they were worried about running out of hospital beds after hospitalizations increased 95% from two weeks prior and 260% over the last month, according to Gov. Michelle Lujan Grisham. At that time, 82% of the state's hospital beds and 75% of the ICU beds were occupied.

A rise in hospitalizations across the country means there are no more staff to bring in, North Dakota officials said Thursday. Gov. Doug Burgum called it the "worst day yet" for his state.

Similar fears were present in Kentucky, where Dr. Steven Stack, Commissioner of the Public Health, said Wednesday there was a concern of running out of health care workers.

Kansas City, Kansas, officials and seven hospital systems ended the week raising their own alarms, warning of a staffing shortage that will not go away.

"If widespread community transmission continues to go up, we will be overwhelmed," said Dr. Steven Stites, chief medical director at the University of Kansas Health System. "That is the inescapable conclusion that we face."

Officials were forced to put more restrictions in place

In states and communities across the US, officials continued to fight the pandemic. And in some cases that meant making the hard decision to reinstate or extend Covid-19 restrictions.

On Monday, Massachusetts Gov. Charlie Baker announced a new stay-home advisory from 10 p.m. to 5 a.m., when non-essential businesses will be closed. He also signed an updated face-covering order requiring anyone over 5 to wear a mask in public. Those measures went into place Friday.

Similarly, a new stay-at-home advisory will go into place beginning Sunday from 10 p.m. to 5 a.m. in Rhode Island, where Gov. Gina Raimondo asked for "voluntary compliance."

Gatherings like house parties have been a main source of virus spread, she said. And if they don't stop, she said, "I will be back in two weeks with a shutdown order."

State officials said the order went against state directives, and Texas Gov. Greg Abbott said in a statement to CNN Samaniego "illegally" shut down businesses. On Friday, a judge ruled in favor of Samaniego, saying his shutdown was valid, according to CNN affiliates KDBC and KVIA.

New Jersey updated a quarantine travel advisory. Anyone coming to New Jersey from 43 states and territories must quarantine for 14 days. Gov. Phil Murphy said he won't rule out another shutdown, adding, "We have to leave everything on the table."

Gov. Kate Brown of Oregon on Friday called on several counties to take a two-week "social pause," limiting indoor social gatherings to single households or a maximum of six people. They'll also be required to observe capacity limits in restaurants, gyms and museums.

"I don't want to have to take further actions to stop the spread of Covid-19 because I know it will have a devastating impact on our businesses both large and small," she said. "But I absolutely will."