When will a coronavirus shot be ready? A look at the vaccine race. 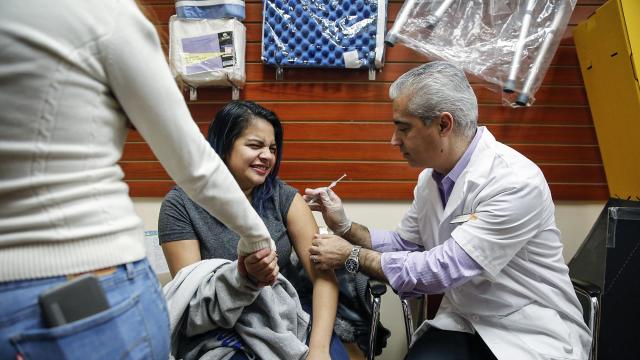 As Americans retreat under orders to stay-at-home and stay socially distant, it’s hard to think too far in the future. But there’s one group of medical experts who are firmly focused on what is to come: Vaccine researchers.

Most public officials have made clear not to expect a vaccine in the next few months. Even with an accelerated timetable, it takes time to make certain that a vaccine is safe and effective.

Here, we’ve summarized a discussion of coronavirus vaccine research with two researchers from the University of Maryland School of Medicine: Kathleen Neuzil, director of the Center for Vaccine Development and Global Health, and Wilbur Chen, an adult infectious disease expert with the same center. The discussion was sponsored by the National Press Foundation on April 3.

How long does it typically take to develop a vaccine?

It’s not unusual for vaccine development timelines to take 10 to 15 years, Chen said.

Generally, a vaccine trial has several phases. In an initial phase, lasting about six months, the vaccine is given to roughly 50 to 100 healthy volunteers. The focus in this phase is to make sure the vaccine is safe for general use, or to note whether bad reactions occur.

In the second phase, lasting six to 12 months, the number of volunteers is expanded to the hundreds. In addition to monitoring the vaccine for safety, researchers try to determine whether the shot produces an immune-system response.

The third phase can last from one to three years and involves thousands of patients, and it may require several rounds that focus on specific subgroups. This phase continues the goals of the first two, but it also collects data on more unusual negative interactions.

Is the current quest for a vaccine operating on a faster timetable?

Yes. The first U.S. clinical trials for a coronavirus vaccine began in March, meaning they were up and running just a couple of months after the virus was detected — an unusually quick start. There is also a separate vaccine being tested in China.

"When we have a pandemic, we try to truncate everything," Chen said. That was done in the case of Ebola virus outbreaks in recent years, and with the coronavirus pandemic, the timeline will be pushed even more, he said.

For coronavirus, "it could end up being less than 18 months, closer to 12, or in the absolutely best case, maybe less than that," Neuzil said. That would be "a tremendous feat," she said.

Neuzil said she expects that there will be "more, and ideally many more," vaccines to begin clinical trials in the coming months. It’s beneficial to simultaneously test a range of experimental vaccines to maximize the chance that at least one will work.

In addition, having a lot of options makes it possible that a later design might offer practical improvements — ease of administering the shot, or cost of production — over the first effective vaccine on the market.

If all goes well, Neuzil said, there may be five or six vaccines in trials by six from months from now. "It could be higher," she said. "A couple are getting close."

How did the U.S. vaccine now being tested get such a quick start?

Partly, it had to do with pandemic-related flexibility granted to federal regulators. But a big reason is that the vaccine being tested is an update of a vaccine format that has been used safely and successfully against other illnesses. Vaccines with more novel designs would typically require more extensive testing before bringing them to market.

In normal times, what percentage of vaccines end up becoming successful?

When a vaccine fails, it’s usually not because of safety concerns, she said. More likely, it didn’t produce enough of an immune response to be useful in combating the germs it’s targeting. In other cases, the problem comes from difficulty in manufacturing it economically, given the demand. The latter shouldn’t be a problem with the coronavirus, since demand will be sky high globally.

How hard is it to manufacture enough doses once a vaccine is approved?

Vaccines based on a familiar design will be easier to produce, Neuzil said. Another factor that could speed up the process is if manufacturers, possibly with government backing, begin to build out their production capacity before the vaccine is approved.

Also, because of the urgency of the pandemic, different companies in different countries may collaborate on production, maximizing the number of doses that can be produced in parallel. There’s precedent for this "technology transfer" approach; a cholera vaccine is being produced by multiple manufacturers, Chen said.

The good news is that demand will be high, making it easer for vaccine manufacturers to make these decisions.

How much do we know about whether people will have permanent immunity after getting a vaccination, or whether booster shots will be needed?

We don’t know yet. "We’ve only known about this virus for less than four months," Neuzil said. "It’s impossible to answer this question until we have some longer-term data."

Scientists do have some hints from previous coronaviruses that circulated in recent years. For some of those, immunity only lasts six to 12 months. If that’s the case with COVID-19, vaccinations may be an annual rite, or more frequently, just as influenza shots are.