'What the hell is going on?' Alumni, staff, students look to protect UNC-Chapel Hill

Chapel Hill, N.C. — A group of University of North Carolina at Chapel Hill alumni, faculty, staff and students on Thursday announced an initiative to promote and defend the university's autonomy.

The group, which calls itself the Coalition for Carolina, released an ad running in the Carolina Alumni Review titled, "What the hell is going on in Chapel Hill?" The campaign references recent "embarrassing" episodes like the "bungling of Silent Sam" and the handling of coronavirus on campus.

"Decisions that shape the future of Carolina should be made in Chapel Hill. Instead they have been made covertly and controlled 28 miles away. In a place called Raleigh," the ad reads.

The Coalition for Carolina said it is hoping to get as many alumni involved as possible to focus on and highlight the good happening on campus.

The group is unhappy with the way officials decided what to do with the Confederate monument known as "Silent Sam" after protesters toppled it in 2018 and that administrators decided to start the fall 2020 semester with students on campus only to be sent back home a few weeks later because of a spike in coronavirus cases.

The most recent controversy was over the Board of Trustees' delay in offering a tenured faculty position to Pulitzer prize-winning journalist Nikole Hannah Jones despite recommendations from Hussman School of Journalism and Media and university administrators.

Hannah-Jones declines UNC-Chapel Hill tenure, will teach instead at HBCU

"Those of us who are pushing forward with this coalition feel that those decisions would not have been as dramatic, they would have been better made and better managed if there had been more autonomy on the campus with the people who understand the issues and have the best sense of what the campus needs," committee member Roger Perry said.

The group's organizers are hoping the Coalition for Carolina can find a better way to keep the university independent of political influence and focus on some of the work being done by students and staff.

"The Board of Governors and the General Assembly need to allow UNC and other campuses of the system to chart their own paths, offer degrees their regions need and keep local control to meet the needs of the 21st century post-pandemic workforce," said Joyce Fitzpatrick, a UNC-Chapel Hill alumna and chairwoman of the Hussman School board of advisers.

"As a taxpayer-supported public institution, our partnership with the General Assembly is critical," Chancellor Kevin Guskiewicz responded in a statement. "We are continuing to serve the people of North Carolina and beyond through the university’s priorities and accomplishments as a great public research institution."

UNC-Chapel Hill remains "focused on our mission" despite the continuing challenges of the pandemic, Guskiewicz said. He cited the university's rank as a top-five public university and No. 1 in Best Value by U.S. News & World Report, the largest class of first-year students ever, a record number of applications and ongoing research by faculty and students. 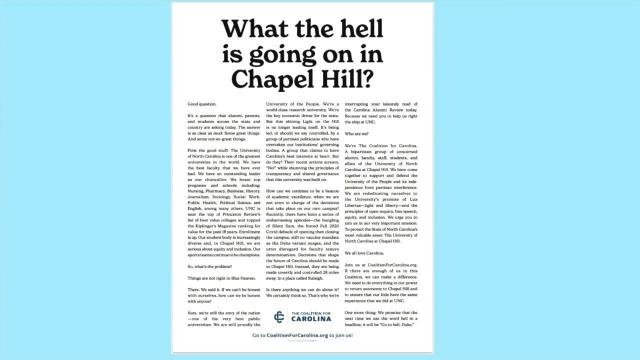 The coalition’s ad campaign, which features the attention-grabbing headline, will take up a full page in the September/October edition of Carolina Alumni Review.