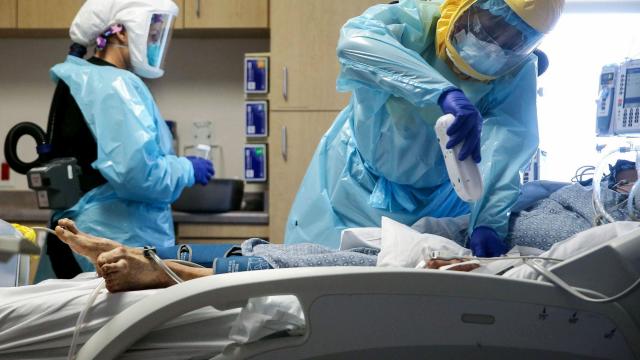 CNN — One of the more puzzling aspects of the novel coronavirus is just how many organ systems are impacted through the course of the disease. We've heard about the heart, lungs and respiratory symptoms, but a growing mystery is its impact on the nervous system.

A report in April suggested more than a third of 214 Covid-19 patients studied experienced neurological complications ranging from loss of smell to stroke.

Another paper published last month in The Lancet Psychiatry looked at 153 patients in the UK and found even those younger than 60 could have psychosis, depression or strokes.

How this virus damages the brain and nerves still isn't totally clear. But as two physicians dedicated to the study of the nervous system, we wanted to find some answers.

Dr. Sanjay Gupta has been a practicing neurosurgeon for the last 20 years and has always been amazed at the remarkable ways the brain is protected by the body. A hard shell of bone, a bath of clear fluid and a blood brain barrier, which creates checkpoints before certain molecules are even allowed to enter. It is our most important organ and more impervious than most. And, yet this virus is still able to sneak into the central nervous system.

And Dr. Minali Nigam is a newly minted resident physician and chose to go into neurology, a field that interconnects the mind and body. Seemingly small details like the ability to raise an eyebrow can tell us what part of the nervous system is injured. There's so much we don't know about the brain, which means tremendous potential for our knowledge to grow.

Coronavirus affects the brain and nerves, too

Among the most common neurological symptoms are loss of smell and taste, which could be the first clues that someone has Covid-19.

We know the virus spreads through particles in the air, so it first enters the body through the nose and mouth. When this happens, it's possible the virus then potentially crosses the cribriform plate, the bone at the top of the nose, to reach the olfactory bulb that houses the olfactory nerve and its branches. If the virus damages these nerves, a person can lose their sense of smell. If the virus also directly invades taste buds, it can prevent nerve fibers from transmitting signals to the brain and cause a person to lose their sense of taste.

Of course, that's just one hypothesis, but we know according to one study that up to 88% of 417 of patients who tested positive for Covid-19 had these types of symptoms. Most of them recovered within two weeks, without any ongoing neurological issues.

Another hypothesis has to do with a protein receptor called angiotensin converting enzyme -- known as ACE2 -- which is found in cells all over the body in the lungs, kidneys, blood vessels, muscles, nose and mouth. In the nose and mouth, the virus is thought to bind to ACE2 receptors in sensory nerve cells and block these cells from facilitating smell and taste.

ACE2 also helps maintain blood pressure and protects the heart and brain from damage. Its role is to lower levels of a molecule called angiotensin II. If angiotensin II levels build up, blood vessels constrict and reduce blood flow to organs, potentially damaging them.

Here is the most interesting thing we are starting to learn. Whether it is the body or the brain, most symptoms don't seem to come directly from the virus, but rather, the body's overzealous immune response to fight the virus.

"The story of how such a virus, with so little genetic information, can wreak havoc to our nervous system is really fascinating," said Dr. Majid Fotuhi, medical director of NeuroGrow Brain Fitness Center and affiliate staff at Johns Hopkins Medicine.

When the virus binds to ACE2 in blood vessels, it triggers an immune response -- sometimes referred to as a cytokine storm. Too much inflammation can impair the body's clotting system and form millions of small clots or several large clots. Together with the higher levels of angiotensin II that constrict blood vessels, clots can block blood flow to the brain and lead to a stroke.

Some strokes are minor and patients may not realize they are having one. As people age, multiple strokes could build up and cause memory loss or poor attention. Other patients who recover from Covid may show symptoms of their silent strokes as depression, anxiety, insomnia, or cognitive decline later in life, according to Fotuhi.

But make no mistake, sometimes these strokes are severe or deadly -- even among healthy people in their 30s and 40s, doctors have found.

Too much inflammation can also break down the protective wall known as the blood-brain barrier and lead to brain swelling, seizures or spread of infection.

That's how 5-year-old Skylar Herbert, daughter of two Detroit first responders, could have developed brain swelling from meningitis. She was the first child from Michigan to die from Covid-19.

It's not clear why she developed meningitis. But we know that the meninges is a protective layer around the brain and spinal cord and is rich in blood vessels and ACE2. In theory, if the virus binds to ACE2 in the meninges, this could lead to damage to the blood vessels and significant inflammation.

Some patients with the virus were also found to have Guillain-Barre Syndrome, a nerve disorder that can lead to paralysis. Here antibodies, formed in response to the virus, react to proteins found on nerves, causing damage.

But it's important to remember that everyone responds to the virus differently.

"There are people who have a measured response to the virus and their immune system can manage it without overreacting," Fotuhi said.

"Healthy people who are asymptomatic are the ones who had just enough immune response to destroy the virus without creating a cytokine storm or blood clots."

Neurological complications aren't unique to Covid-19. Viruses like the flu, measles, respiratory syncytial virus and Zika have them, too, as do the other types of coronaviruses, SARS and MERS.

How this happens boils down to two main mechanisms: direct viral invasion of the nervous system or damage from a hyperactive immune system.

Some neurologic manifestations like confusion or weakness may also be nonspecific complications of critical illness that are unrelated to the actual virus.

"Neurologic involvement seems to be a prominent feature of this particular coronavirus," said Dr. Felicia Chow, a neuroinfectious disease expert at the University of California, San Francisco.

Or we may be seeing more neurologic complications with Covid simply because there are many more cases of Covid overall compared with prior coronavirus outbreaks.

"What's been reported so far isn't really something that we see that commonly with at least certain types of respiratory viruses," she said. "But it's hard to say with the still limited information that we have. A much deeper dive is needed to understand the true neurologic burden and sequelae of this pandemic."

There aren't large studies looking at Covid-related neurological symptoms, so right now doctors are treating these symptoms like they would for patients who don't have the virus.

But small studies with a few hundred people have come out. One consistent feature is that patients with risk factors such as high blood pressure, diabetes and obesity who get Covid are at higher risk for severe outcomes, including neurological complications, than healthy and fit individuals.

That's why regular exercise, healthy diet, proper sleep and reducing stress are still important during this pandemic. By maintaining an active, healthy lifestyle, patients who end up getting infected can "improve their odds of a faster and more favorable recovery," said Fotuhi.

For doctors, patients with Covid may not be sick with the typical viral symptoms you'd expect like cough or fever. Some patients who show up in the emergency room have only shown signs of stroke. And brain symptoms could be a patient's first and only symptoms. In certain situations, blood thinners and steroids may be as important as anti-viral medications.

"Covid can have many different faces," Fotuhi said. "It's important for people to appreciate that."

And it's something we'll keep in mind as we take care of patients.

In covering the pandemic as journalists and caring for Covid patients as doctors, we've learned to keep an open mind. What we think today may change tomorrow and that's OK. It's part of the learning process. As our knowledge of the virus continues to grow, we're one step closer in persevering through this pandemic together.