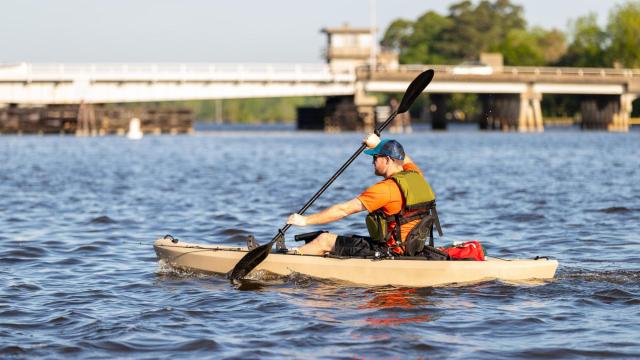 In a time of social distancing, people are looking now more than ever for a refreshing escape. With many businesses still closed or operating at a limited capacity, options for getting out are slim. But around Washington, residents have been finding ways to socialize in the great outdoors.

Since the town is tucked right along the Tar and Pamlico Rivers, it's the perfect location to launch a kayak or paddleboard and spend a few hours floating along the water. At Inner Banks Outfitters, owner Liane Harsh has noticed a significant uptick in the number of kayakers.

Her store, located just a stone's throw away from the water, supplies kayak and paddleboard rentals, as well as bicycles and various outdoor equipment.

"We've seen a lot of people coming through, and kayaking is naturally a socially distant activity," Harsh said. "And with us, you don't have to do anything except show up. So you can call us and say, 'Hey, I want two tandems,' then come in, sign the waiver, pay and meet us at the water. We carry the boats to the water for you, hold them while you get in, then we'll send you on your way. Then you come back, and we basically put everything away for you."

Harsh tells people they don't have to carry the boat anywhere — all they have to do is show up and have fun. Inner Banks Outfitters offers single and tandem kayak rentals and hasn't changed its prices once in Harsh's 15 years of operation. For those new to hitting the water, Harsh's staff will gladly give a quick, five-minute demonstration — free of charge — to help customers learn the ropes before they start paddling.

Once on the water, Harsh recommends heading for the creek or the river.

"If you go up the creek it's like going to a rainforest, and if you go out on the river, it's like hitting the ocean — it's a nice contrast," she said.

In addition to kayak rentals, Inner Banks Outfitters also hosts organized paddle board yoga classes every Saturday and Thursday evening — the second day was added due to popular demand.

Washington's waterfront gives the town a unique appeal that's suited for kayaking, paddle boarding and other activities like boating.

At Moss Landing Marina and Park Boat Company, co-owner Austin Smithwick has noticed a similar uptick in traffic — and in a time of social distancing, he sees boating as the perfect opportunity for escape.

"Generally with boating, you're out with just a couple of people. It's typically your family, and you're out in the middle of open water. Even when you're out with different people, they're on different boats, so you're not beside each other. And we have seen a tremendous surge in boat usage and people coming to boat that didn't do it before," Smithwick said. "Folks that were going to potentially be taking a big family vacation are saying, 'Rather than spend that money on that, what else can we do?' And boating is one of those things that they're like, 'Hey, great. This is a wonderful opportunity for our family to still be together, still make new experiences and enjoy each other, and do it not in front of a screen. And this is awesome.' So they're replacing the family vacation with a boat."

In addition to selling boats, Smithwick's shop also offers rentals by the hour. His team assists renters and buyers with learning the ropes of navigation and system workings through on-water orientations. In order to accommodate the increase in traffic, the Moss Landing Marina is hoping to add a few additional slips.

Thanks to its location on the water, Washington is a dream for boaters of all kinds.

"One of the coolest things about boating in Washington is that if your starting point is right here in Washington, you can go 30 minutes in one direction and be in big, open water. You can go 30 minutes in the other direction, and you can be in small rivers and creeks that are totally different," Smithwick said. "Depending on what type of boating you want to do, you can literally do it all right from here. That's why we have such a huge variety of different boat types. We've got big sailboats, all the way down to kayaks, big cruisers to pontoon boats and center console boats."

While the water is a major draw for Washington, the town also offers plenty of land-based outdoor opportunities. At Inner Banks Outfitters, Harsh has seen an increase in bicyclists, for example.

"There's been a huge road biking community here, but now what we're really seeing is this increase in cruiser riding. You know, like, 'Hey, I just want to get outside. I want to go ride around and be social, and see people, but not necessarily be close to people.' When you look around Washington now, you see families riding together," Harsh said. "We're selling bikes, but we're also working on bikes. We're doing labor-intensive things nonstop, because we're keeping people on bikes. People are pulling bikes out of sheds that haven't been out in years, and it's cool, because it's a nice contribution."

"I feel very connected to this community anyways, but there's just more interaction, and there's more people coming through."