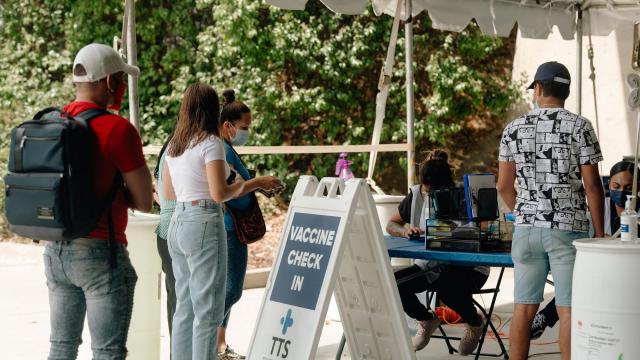 A day after President Joe Biden issued broad vaccine mandates aimed at propelling U.S. workers to get vaccinated against the coronavirus, federal health officials released a handful of studies highlighting how effective the shots are at preventing infections, hospitalizations and deaths — even while the highly contagious delta variant has been dominant.

Three studies that drew data from different U.S. regions evaluated the protective power of the vaccines. One looked at more than 600,000 virus cases in 13 states, representing about one-quarter of the U.S. population, between April and July, and concluded that individuals who were not fully vaccinated were far more susceptible to infection and death from the virus.

Vaccine protection against hospitalization and death remained strong even when the delta variant was the dominant form of infection. But the vaccines’ effectiveness in preventing infection dropped to 78% from 91%, the study found.

The studies underscore a series of similar findings in recent weeks.

“As we have shown, study after study, vaccination works,” said Dr. Rochelle Walensky, director of the Centers for Disease Control and Prevention, at a White House COVID briefing Friday.

As more and more Americans become vaccinated, experts always expected that immunized people would represent a greater percentage of hospitalized patients. “What I want to reiterate here is, it’s still well over 90% of people who are in the hospital who are unvaccinated,” Walensky said.

“We still have more than 10 times the number of people in the hospital who are unvaccinated, compared to vaccinated,” she added.

One study, conducted at five Veterans Affairs Medical Centers, found that protection against hospitalization declined with age, to 80% for those age 66 and older, down from 95% for adults ages 18-64. A second study found vaccine effectiveness dropped off at age 75.

The findings could help identify populations that may be in need of additional doses or booster shots. In August, the Food and Drug Administration authorized giving third doses of Pfizer-BioNTech’s and Moderna’s coronavirus vaccines to some people with weakened immune systems, including organ transplant patients.

But officials have said there is insufficient data on whether the vaccines’ effectiveness declines over time to recommend boosters for healthy adults.

The data also suggests that the Moderna vaccine may be slightly more effective at preventing infections and hospitalizations with the delta variant, compared with the Pfizer-BioNTech vaccine. Both of the mRNA vaccines had higher efficacy rates than the Johnson & Johnson shot, but the studies were not originally designed to evaluate the comparative effectiveness of different vaccinations.

In the study of 33,000 medical encounters in nine states between June and August, the Moderna vaccine had an effectiveness rate of 92% against infection, compared with 77% for the Pfizer-BioNTech shot. This article originally appeared in The New York Times.