Union Special bakes up bread to feed the community 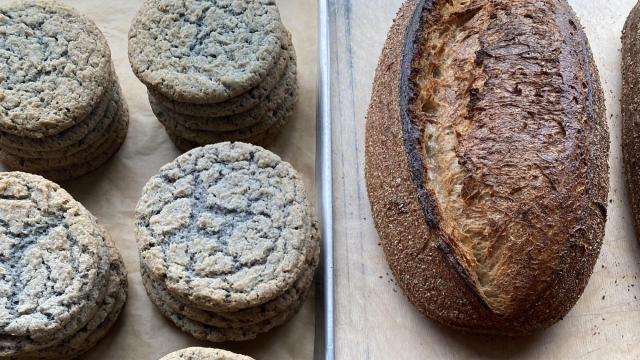 Raleigh, N.C. — When executive pastry chef Andrew Ullom left famed chef Ashley Christensen's restaurant group to open his own business, he knew he was taking a big chance leaving a job he enjoyed.

"It was a killer job. When I gave her notice, I also told her that I understood that it was the dumbest decision that I probably could make on that day," Ullom said.

Ullom described his time with Christensen as "a really great example to restaurant owners everywhere of how you can really be committed to your workforce."

Ullom opened Union Special bakeshop and cafe in August in the Gateway Plaza off Crabtree Boulevard in Raleigh.

The business was doing well and then the coronavirus pandemic hit, mandating dining rooms close. Union Special soon saw its wholesale business, which had made it successful in its first six months, start to drop off.

"A third of our business just evaporated..the portion of this business that paid the entire payroll for the restaurant is just gone," Ullom said. "We probably should have closed and taken some time to figure this out, but we took like four or five hours and turned on online ordering and we made a pretty hard pivot to take out only, and we immediately closed the front of house."

Ullom said the nearby neighborhoods are keeping them alive. "It's refreshing to me to see the same folks two and three times a week, you know, even if it's just for a cup of coffee," he said.

Union Special has added some items like the option for people to buy a loaf of bread for $5 to donate to a local mission, including Bridge the Gap and the Interfaith Food Shuttle.

"We had a moral obligation to make sure that folks that were in need got fed, and however we could help with that within the confines of our business, which is baking, you know, we were going to make that happen," Ullom said.