Triangle company helps grocery store shine regardless of the weather

Rich Square, N.C. — In the tiny town of Rich Square in Northampton County, there is one, small grocery store.

It has been a lifeline and source of comfort during the coronavirus crisis. 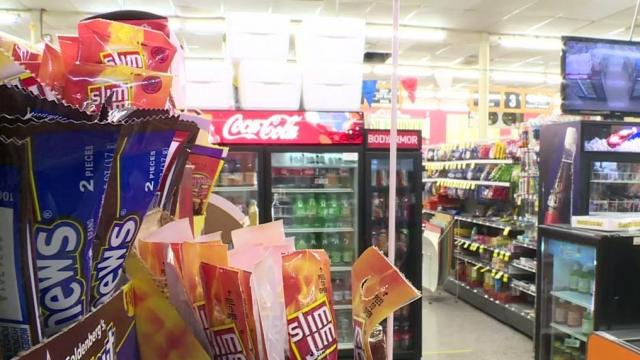 That storm in April gave store owner Frank Timberlake heartburn. "Oh it was serious," he said.

Timberlake was already losing sleep because of the coronavirus: Could he keep the shelves stocked?

Now, in the middle of a pandemic, his store's power had gone out for eight hours.

"If I had lost my inventory, then I'd have to dump it," he said.

The pig feet. The turkey necks. The pork chops.

Timberlake added, "The community would have been down for at least three or four or five weeks."

That didn't happen. This time. It has happened before in other storms.

But this is a new day. "I don't have that worry anymore. I might even get some sleep," he said.

They'll feed the men in muddy boots who have made a big delivery to this small grocery. It's a generator donated by PowerSecure of Wake Forest.

"I don't know how to express how thankful I am," Timberlake said.

The chief operating officer, Jim Smith, came across a recent story about the Rich Square Market in the Wall Street Journal. He was troubled to read about the power outage.

"Here's Frank trying to support the community and people here, to keep them fed. I said, you know what, this is what we do. This is in our back yard. We're gonna fix this, and we have," stated Smith.

Timberlake says he never could have afforded this on his own. "I don't have to call anybody. I don't have to do anything. In ten seconds, we're back on. How amazing is that? Yeah, it gets me a little bit."

PowerSecure workers spent the last two weeks installing the generator and all the wiring. They also installed LED lights throughout the store, which are expected to cut its power costs in half.

In the rain, Timberlake presented shirts to the workers: "We're In This Together." Then he does what does best, he feeds them.

"This community is now not gonna be without," added Timberlake.

What a beautiful day at the Rich Square Market.