TOM EARNHARDT: There are no 'least' parts 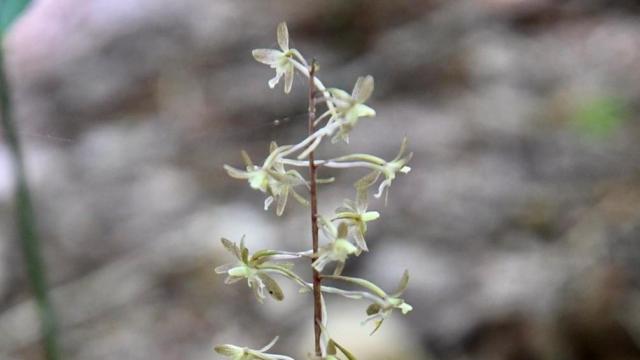 I don’t like to play favorites, but I do have a favorite orchid. I’m not thinking about the orchids you saw at the senior prom or the ones your mom may have worn on special occasions. And I’m not referring to the grand, native orchids in lavender, pink, white, or yellow found in Blue Ridge mountain coves in the spring and summer.

I’m talking about a tiny, native orchid that most of you have walked past, but have probably never seen. It is found across North Carolina and much of the eastern United States. The diminutive “cranefly orchid” (a.k.a. crippled cranefly orchid) is so small, it would make a perfect corsage for a hummingbird.

The cranefly orchid is starting to bloom now (late July) and can be found in a majority of North Carolina counties until early September, but you almost have to be looking for it to see it. You can find them protruding from leaf litter near decaying wood in deciduous forests (especially around oak/hickory/gum), and in sandy areas of mixed oak and pine. Delicate blooms, no larger than your little fingernail, will appear as green, purple, yellow/gold, or almost colorless.

The orchid emerges from the forest floor on a 12-to 30-inch dark-colored bloom stalk not much thicker than a pencil lead. Each bloom stalk can hold a couple of dozen miniature blooms. Unlike some of its rare cousins, the “cranefly” is a common orchid even in some of our more urban parks like Umstead and Eno River State Parks.

Without belaboring the point, this is one of those wild things you would never miss if you didn’t see it, and know about it. If cranefly orchids disappeared from the North Carolina landscape tomorrow, the story would not make the evening news. After all, this is among the least showy of North Carolina’s approximately six-dozen native orchid species. So why is this lackluster wildflower important to me?

I am reminded of the cranefly orchid when I get my car repaired. John, an independent mechanic, has fixed my family’s Volvos, Chevys, and Hondas for many years. He has the wonderful habit of showing me what he has taken out, or replaced. On many occasions the problem with the vehicle has not been a “big ticket” item—an alternator, starter, or battery—but just a frayed wire or a loose connection caused by a missing screw. John has often reminded me that what may seem insignificant can have a profound impact: “If the wrong screw is missing, your car won’t run!”

To the naturalists and scientists, John’s mechanical advice should be a reminder of the famous admonition of ecologist Aldo Leopold in his book, Sand County Almanac (1949): “To keep every cog and wheel is the first precaution of intelligent tinkering.”

I have photographed the cranefly orchid for 25 years, but to this day I do not know the complete story of this special flower in Tar Heel forests. For me the orchid is part of the mystery and wonder found in all of our wild ecosystems. It is a perennial plant, but its blooms are not predictable. As with other native orchids, it has to negotiate a complex relationship with forest fungi (a mycorrhizal association). From this symbiotic relationship with fungi, the cranefly orchid receives nutrients necessary for its survival. Finally, the orchid’s success is also dependent on several species of nocturnal moths for its pollination.

Perhaps the most amazing thing about the cranefly orchid is that its single leaf appears, not in the summer, but in the autumn as a dark green oval with a purple underside. The leaf will last throughout the winter until late spring when it shrivels and disappears. Unlike most plants, in which photosynthesis takes place during the spring and summer, photosynthesis for the cranefly orchid occurs in the winter. This is a brilliant survival strategy. When deciduous trees lose their leaves in late autumn, the cranefly orchid’s single leaf on the forest floor soaks up the sun’s rays and stores energy in small bulb-like “corms.” Fortunately, the green leaves of individual orchids are often grouped together making them easier to find.

For me the cranefly orchid has become a metaphor, a symbol if you will, that just because we don’t recognize, understand, or appreciate many of the living things around us, does not mean they are not important. The story of the cranefly orchid—its relationships, its struggles, and its ability to adapt—is repeated over and over again in the natural world.

As humans, we have a lot to learn from it. This is precisely why such legislation as The Endangered Species Act (1973) is so important, not just for the survival of the least known plants and animals, but for our own survival. The words of Aldo Leopold ring true: “To keep every cog and wheel is the first precaution of intelligent tinkering.”

Many of us have observed a strong correlation between the health of our environment, the health and welfare of people, and a strong economy. Public investment in the environment, education, and quality healthcare for every person, are investments in our economy. During these last four months in which the coronavirus pandemic has affected the way we live, travel, and associate with others, it has become abundantly clear—that like the complex world of the cranefly orchid—we, too, are connected and dependent upon others.

Over the next few weeks, take a walk in a North Carolina State Park and look closely. If you’re lucky, you’ll find a diminutive orchid to remind you that when we discount the worth any living thing around us, we do so at our peril. Remember the admonition of Aldo Leopold mentioned earlier, but also the words of wisdom from John, the best auto mechanic I know: “If the wrong screw is missing, your car won’t run!” 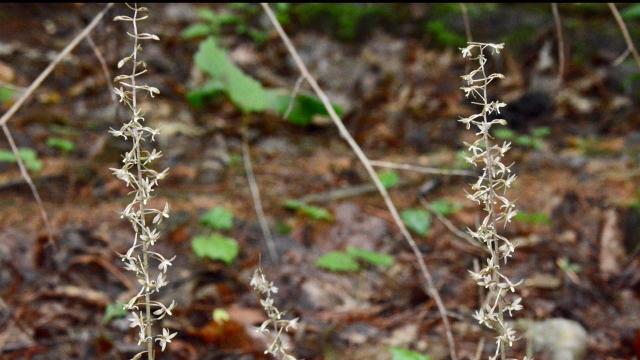 I shot these photographs of blooming cranefly orchids in Umstead State Park in early August a couple of years ago. With a macro (closeup) lens, this looks like a “normal” orchid, until you remember that an individual bloom of the “cranefly” is no bigger than a pencil eraser (photo 1). Occasionally, you can find several bloom stalks together (photo 2). 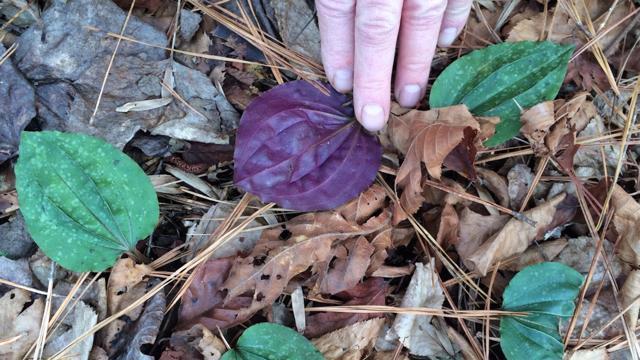 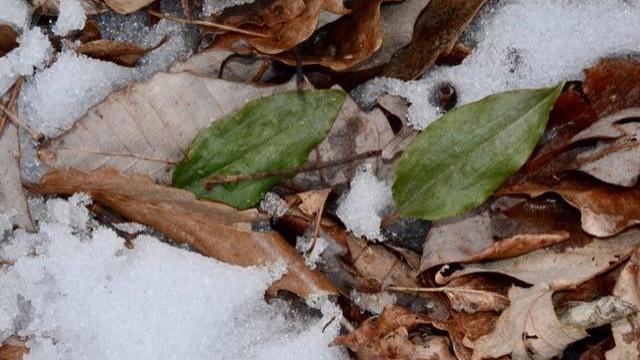 There are no green leaves in summer to help you locate cranefly orchid plants. This orchid is unusual, in that its green leaves (with a purple underside) emerge in fall. Photosynthesis and the storing of energy occur during the winter when other plants are dormant (photo 3). On several occasions I have found cranefly orchid leaves in the snow (photo 4). 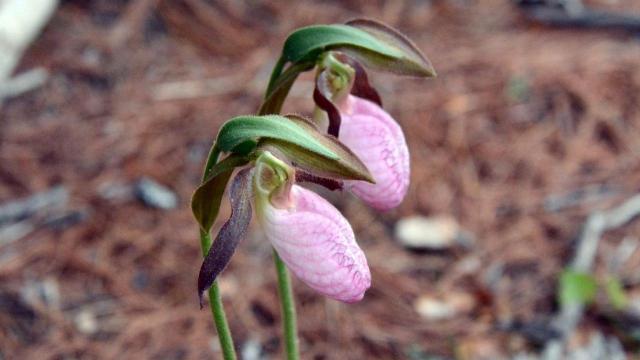 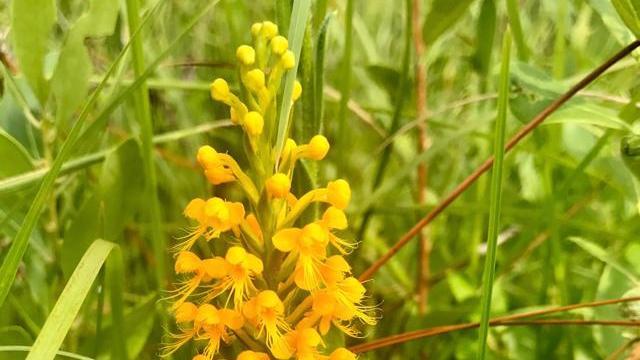 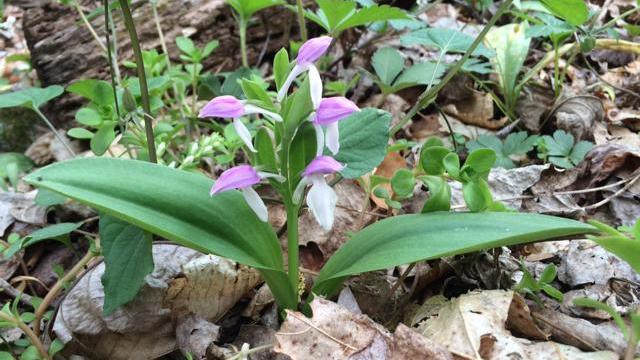 Many of North Carolina’s native orchids are magnificent in shape, color and size. The three orchids shown here—pink lady’s-slipper (photo 5), yellow-fringed orchid (photo 6), and showy orchis (orchid) (photo 7)—like the tiny cranefly orchid, also depend upon symbiotic relationships with fungi for their success. 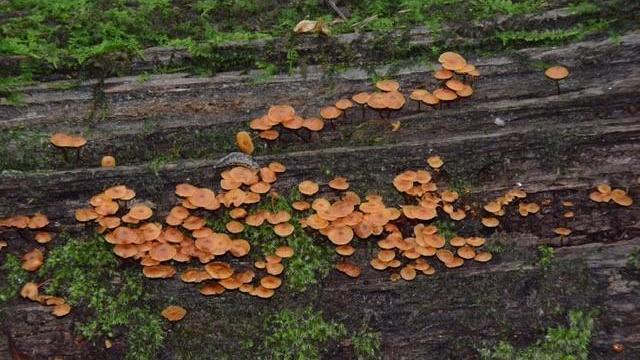 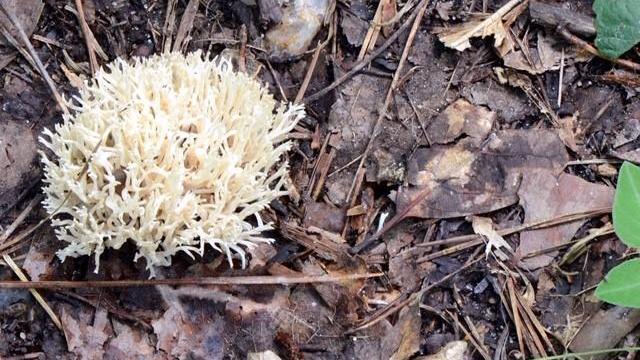 We are just beginning to fully understand how important fungi are in American forests. There are an estimated 8,000 species of fungi in North Carolina. They are critical to soil quality and in the decay of leaves and wood debris. Fungi also play no small role in the variety, vitality, and beauty of the wild flowers, shrubs and trees found in the Tar Heel state. Fungi—like orchids—come in every color, shape, and size imaginable (photos 8 and 9). 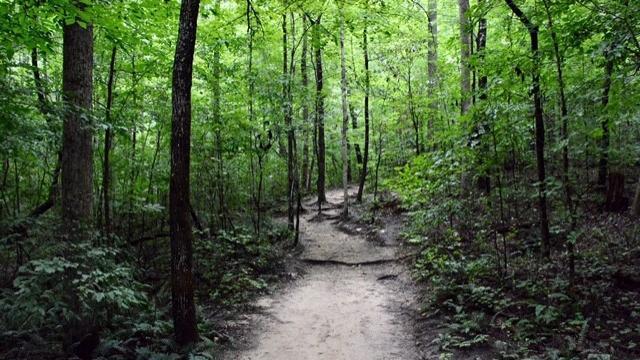 Take a walk in a Tar Heel forest this August (photo #10), and look for a cranefly orchid. Remember, in our forests, there are no “least” parts.