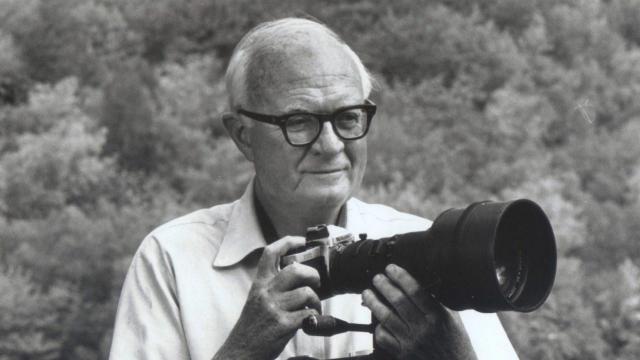 North Carolinians of my generation knew Hugh Morton as the person most responsible for bringing the “Battleship North Carolina” to Wilmington, as a strong voice for saving the Cape Hatteras lighthouse, as an ardent environmentalist, and as the developer and protector of Grandfather Mountain.

Hugh was also one of the finest photographers to ever hold a camera in our state. From the end of of his service in World War II, until his death in 2006, Hugh Morton was responsible for many of North Carolina’s most iconic photographs—coastal scenes, sports, politics, the environment, and all-things Grandfather Mountain.

I admired Hugh Morton for his strong stands on environmental issues and for his nature photography long before I got to know him in the early 1990s. He had been the advocate and champion of North Carolina’s “Mountain Ridge Protection Act” (1983), which prohibited the construction of tall buildings on mountain peaks and ridge lines. Morton was also one of the first in North Carolina to speak out clearly and unambiguously about the environmental impact of dirty air and “acid rain” from coal-fired power plants.

Hugh always did his homework and sought out the best scientists to educate himself and others about the “real costs” of air and water pollution to the health of North Carolina’s people and economy. In the late 1990s he recruited legendary broadcaster Walter Cronkite to narrate a powerful documentary, The Search for Clean Air. Morton’s efforts were instrumental in the passage of North Carolina’s “Clean Smokestacks Act” (2002). As much as any other Tar Heel of his generation, Hugh Morton proved that it was possible to be a successful business person and a promoter of tourism, while remaining a passionate steward of the environment.

Some people thought Morton was “hardheaded” when he opposed the construction of the last stretch of the Blue Ridge Parkway. He believed the proposed road design near Grandfather Mountain would do permanent damage to the mountain and its ecosystems. In the end, Morton and Blue Ridge Parkway authorities agreed on the design of the Linn Cove Viaduct, which literally hugs the mountain without destroying rock formations and flora.

Again, it was Hugh Morton’s vision, discipline, and willingness to work with others, that helped produce the right outcome for the environment and for tourism. The “missing link” in the Parkway opened to rave reviews in 1987.

As an evolving nature photographer in the 1990s, I studied Morton’s large animal photographs, his birds, his landscapes, and his sunsets, but for me, his wildflower photographs were simply the best. Each Hugh Morton image of a native wildflower was perfectly lighted, beautifully composed, and often framed by a dramatic backdrop. In his own unique way, he was the “Ansel Adams” of the Blue Ridge.

During a phone call in 2005, Morton shared with me the location of a wild patch one of North Carolina’s rarest native wildflowers, known as “Oconee Bell.” He told me the flower would be at its peak around March 15th and that I could expect the “best light” between 2:00 and 3:00 PM. His directions and instructions were precise. I’m quite sure that Mr. Morton had already envisioned the image that I would be taking.

A couple of years after Hugh Morton’s death in 2006, I had a conversation with his wife, Julia, at Grandfather Mountain. I ask her what quality made Hugh such an accomplished photographer. She did not hesitate in responding: “Patience! I often traveled with him while he looked for the perfect angle and waited for the best light to photograph a particular flower. I sometimes read two books before he got the picture he wanted. Don’t know who was more patient, Hugh or me?”

In retrospect, I am convinced that Hugh Morton solved problems in the same way he took photographs in the natural world. His best images started with a vision and a plan to achieve it. Knowing what he wanted, Morton pursued his objectives with determination, technical expertise, and of course, patience.

When I think of Hugh Morton, I am reminded of the work and legacy of other environmental leaders and advocates who have helped shape the way we confront challenges impacting life on this planet and our own quality of life. Such leaders include Wilma Dykeman (an early advocate for the French Broad River), Rachel Carson (who warned us about the environmental effects of unregulated chemicals), E.O. Wilson (our nation’s continuing champion of biodiversity), James Hansen (a leading advocate for national and international action on climate change), and Betsy Bennett (whose vision and tenacity gave us a North Carolina Museum of Natural Sciences for the 21st century).

Morton and these other leaders identified a problem, sought the best advice, educated those around them, and then worked tirelessly until the problem was solved. To a person, they also left selfishness, personal gain, animosity, and politics at the door.

Perhaps the reason Hugh Morton and these other luminaries come to mind is that I don’t remember any of them ever saying that a problem was too difficult to solve. None of them ever implied that major environmental issues of the day “would just go away.” None of them ever approached difficult problems with the statement or attitude: “It is what it is.”

Unfortunately, too many individuals in positions of authority, at both the national and state level, have decided to take shortcuts as we deal with a global pandemic. They seem to have accepted transmission rates and hospitalization rates that are significantly higher than those of most other industrialized countries of the world. While other nations have virtually halted the transmission of coronavirus with the use of proven public health techniques, too many American officials are still engaged in magical thinking.

As a citizen, I want North Carolina‘s economy and our schools to open, but we must do it safely. As a parent, I want my children to be part of a state and nation in which science, civility, and shared sacrifice are the norm. As a person at three-quarter century mark, I don’t want to waste additional months “hoping and wishing.” I am ready to follow leaders with a vision, a plan to achieve it, and the patience to see it through.

As we deal with the worst pandemic in a century, a changing climate, and new generations hungering for contact with the natural world, think of Hugh Morton and the other leaders who have helped safeguard our natural resources.

These women and men had other careers and obligations, but each also had a vision for a healthier world. They worked as though our children and the planet depended on them.

Hugh Morton served as a photographer in the U.S. Army in the Pacific during WW II. For the rest of his life he was one of North Carolina’s most prolific photographers covering politics, sports, and nature. His collection of several hundred thousand images is preserved in the North Carolina Collection, Wilson Library, at UNC-CH. (Photo 1 -- Courtesy of the Grandfather Mountain Stewardship Foundation) 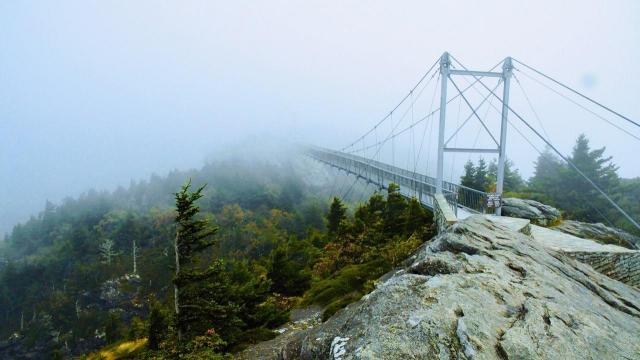 Morton was a promoter of North Carolina tourism and of Grandfather Mountain. The mile-high swinging bridge, first built in the 1950s, has been a major attraction for visitors from around the world. (Photo 2) 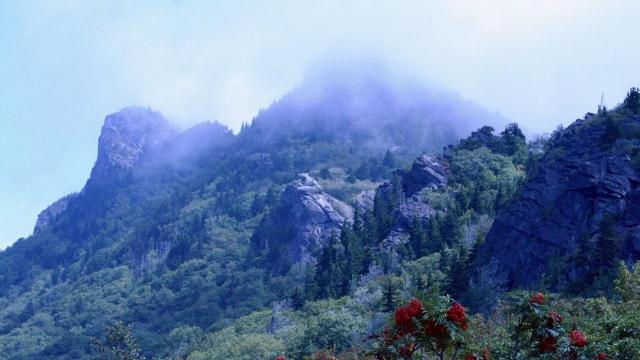 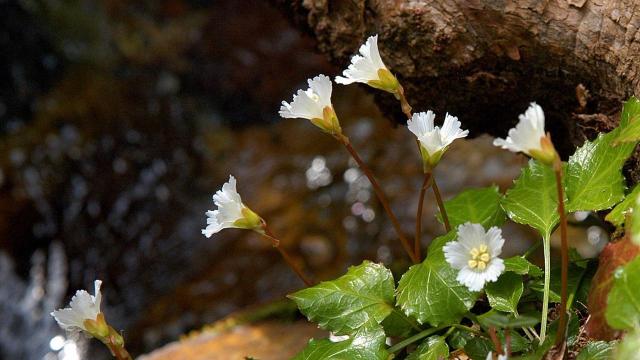 The rare wildflower Shortia galacifolia is commonly known as Oconee bell. It was first discovered in North Carolina by Andre Michaux, a French botanist, in the late 1700s. I photographed these flowers in March, 2006, with precise instructions from Hugh Morton. (Photo 4) 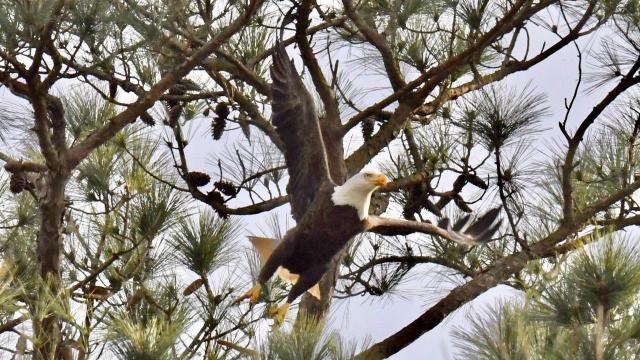 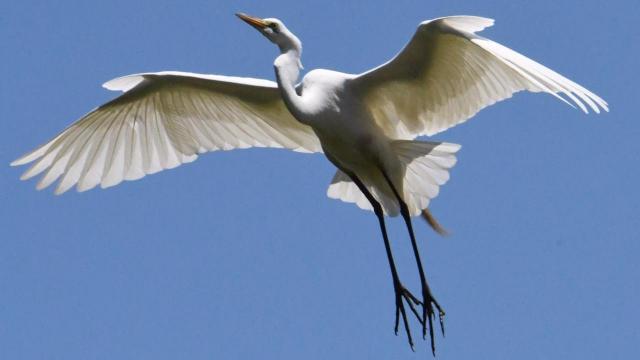 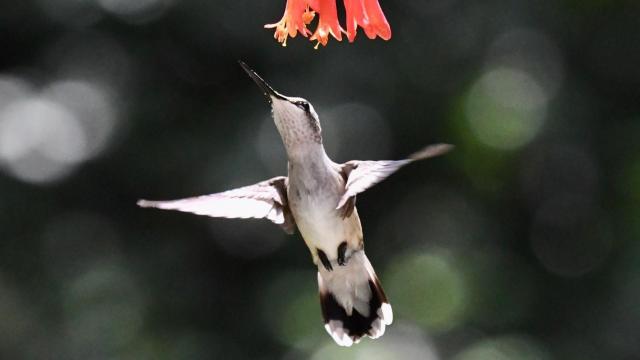 Photographing wildlife well requires a plan. You’ve got to “set up” in the right place, the right time, and in the right light. Photographing bald eagles, great egrets, and hummingbirds present different challenges...but all require infinite patience. (Photos 5, 6, and 7) 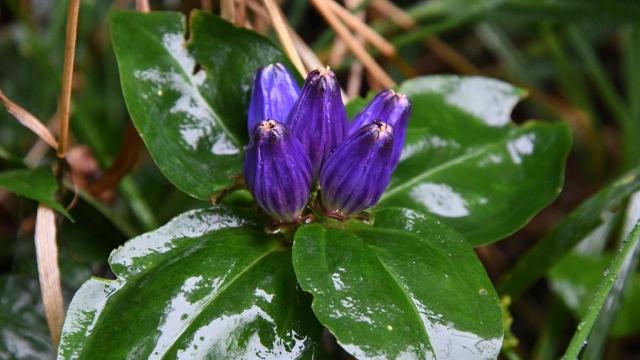 Sometimes the best light can occur on a rainy day. I happened upon this beautiful gentian one rainy morning in Buncombe County in early October. The rain highlighted the dark glossy leaves and the deep purple. (Photo 8) 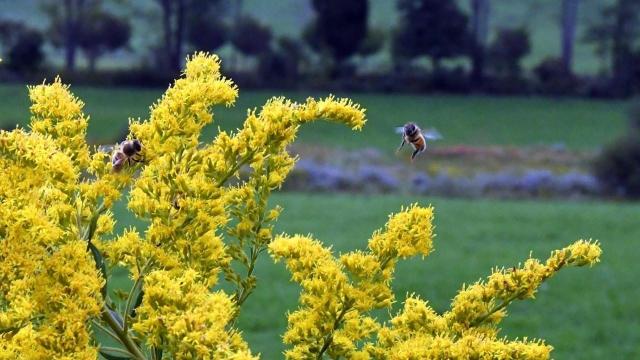 Photographing a flower as simple as golden rod in September can turn into a special moment when honeybees appear! (Photo 9) 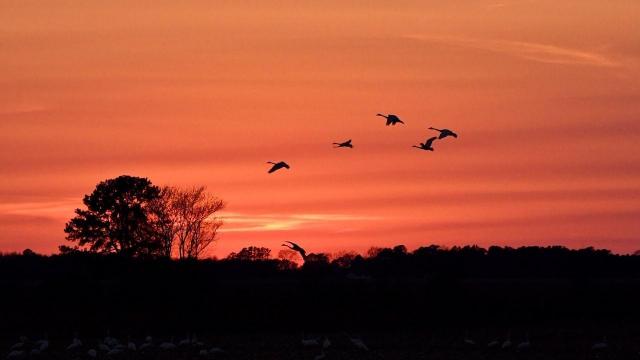 The “perfect light” at sunrise or sunset lasts only a few minutes each day. Getting a family of swans to fly in position at the precise moment requires intervention from “higher authorities.” (Photo 10)