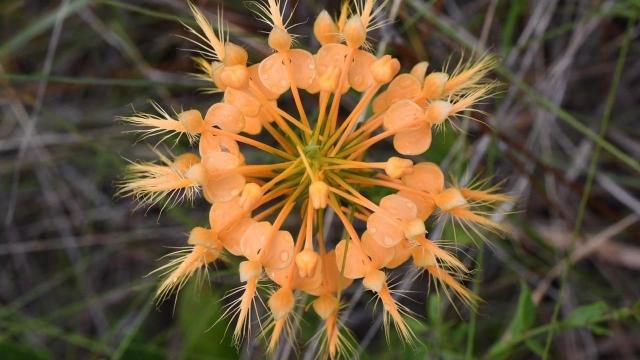 It’s mid August, the “dog days of summer” when temperature and humidity are often the same number. In much of North Carolina we’ve just experienced the most 90-degree days ever in July, our first hurricane and an earthquake. Add to this a pandemic and the most divisive political season in memory -- sleep doesn’t always come easy.

If you are like me, you are also “zoomed out” and tremble at the thought of another “virtual” fundraiser, class or veterinary appointment. In these troubled times I am often wide awake before 5:00 a.m., long before I put on the coffee. Recently however, I have found blessed relief from the summer of 2020. Unlike some politicians who offer dubious medical advice,  I offer a proven natural remedy — an early morning Tar Heel road trip!

One day each week, instead of rolling and tossing, I drag my carcass out of bed, grab a face mask, camera, note pad, sandwich, and a thermos of coffee. I turn on NPR and depart Raleigh before sunrise. It makes no difference whether I head east or west; the most important thing in launching a predawn adventure is not to think too hard about it or plan too much.

I have a general destination in mind and favorite two-lane roads to get me there. Morning trips can focus on wildflowers, birds, sea shells, frogs, mushrooms, and even bears. Actual sightings are a bonus, since the goal of these a.m. trips is immersion in the sights, sounds and smells of a wild place.

These excursions can take you to coastal wetlands, the “little mountains” (monadnocks) of the Piedmont, or a hundred locations along the Blue Ridge Parkway. When time is scarce, your “road trip” can also be a hike near your home to a field of goldenrod or a creek filled with tadpoles.

This past week I left Raleigh and drove two hours toward our three southeastern-most counties—Bladen, Columbus, and Brunswick. This is longleaf pine country -- viewed by some as monotonous “pine barrens” but nothing could be further from the truth.

Longleaf once covered over 90 million acres of the Southeast, from eastern North Carolina to east Texas. Only a small percentage of our original longleaf stands remain, but these remnant forests still hold astonishing biodiversity. A single square meter of longleaf pine habitat can contain as many as 40 different plant species. The forests are also home to an uncommon array of birds, reptiles, amphibians and mammals.

Occasionally — to borrow from sports lingo — one of my morning outings turns into a "triple crown" event, a "triple-double" or a "hat trick. " This past week, deep in the longleaf, I experienced one of those days.

My adventure began with disappointment near Bolivia, N.C. I drove along side roads where I had found Venus flytraps and orchids more than a decade ago. It came as no surprise to find one road widened into four lanes and another former botanical hotspot transformed into a housing development. Progress has a way of displacing wild things.

With the morning sun still low in the sky I drove to a second location west of Shallotte, where I stopped next to a power line right-of-way. There, I found a large number of southern white-fringed orchids in full bloom and a spectacular concentration of carnivorous plants, including sundews and Venus flytraps. Many of the “traps” were a glorious, deep crimson. In the wet, squishy soil, I tread carefully as I photographed the botanical treasures that seemed to flow out of the longleaf savanna near the right-of-way.

It was still morning so I decided to stop one more time on my way back to Raleigh at The Nature Conservancy‘s 15,000-acre Green Swamp Preserve near Supply. This longleaf pine preserve established by The Conservancy in the mid-1970s is a must-see for anyone interested in biodiversity in North Carolina. From early spring until Thanksgiving the Green Swamp holds one of the state’s richest and most diverse displays of living things. T o walk in the Green Swamp is to celebrate life in its myriad forms.

Walking in a longleaf forest surrounded by cinnamon fern and wire grass would have been reward enough. However, after no more than a mile of rambling across the savanna I saw touches of yellow and orange nestled in the wire grass ahead of me. I was soon standing in the midst of several dozen yellow-fringed orchids and a smaller number of the less common yellow fringeless orchid. Having photographed white-fringed orchids earlier, the opportunity to photograph two additional native orchids made my morning adventure a “longleaf triple crown.”

These morning excursions, over many years to every corner of the "Tar Heel-sphere" have convinced me that few people on earth have more, or better, options to interact with nature than those of us living in North Carolina. We tend to define progress as wider interstate highways, faster bandwidth, and a booming real estate market. Progress must also be defined by the number of natural areas preserved and opportunities created for every North Carolinian to experience wild places and things.

These photographs will give you some idea of the sheer joy and beauty I experienced on my most recent morning adventure. I am always aware that many of my day-trips take place in rural areas where development has not caught up with the needs of people. I long for the day when educational opportunities, healthcare and jobs for residents of these underserved counties will match the natural and cultural assets they hold for all of us.

Let the photographs below be a reminder that “hoping and longing” will not preserve natural resources, improve schools, enhance healthcare or ensure social justice.

Only your vote has such power. Over the next two months if you need a reminder of what’s at stake on Nov. 3, haul yourself out of bed before sunrise, take a two-lane road in any direction, and experience the joy of a Tar Heel morning.

“Here’s to the land of the longleaf pine...” 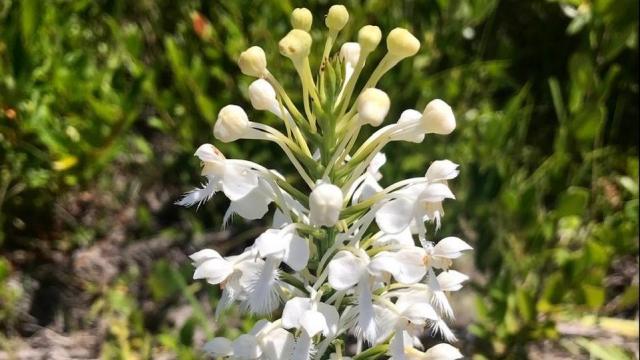 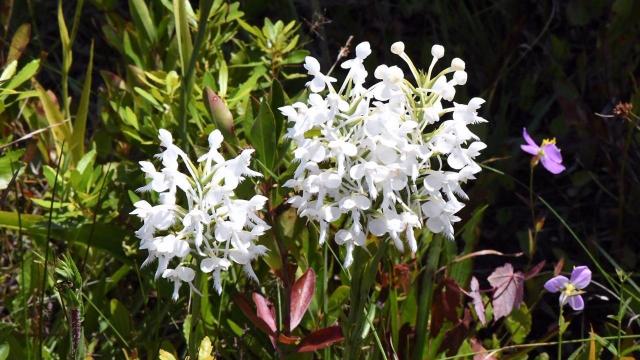 When people see “white flowers” along North Carolina roads, many never dream they could be looking at native orchids, like these white-fringed orchids photographed near Shallotte. (Photo 1) and (Photo 2) 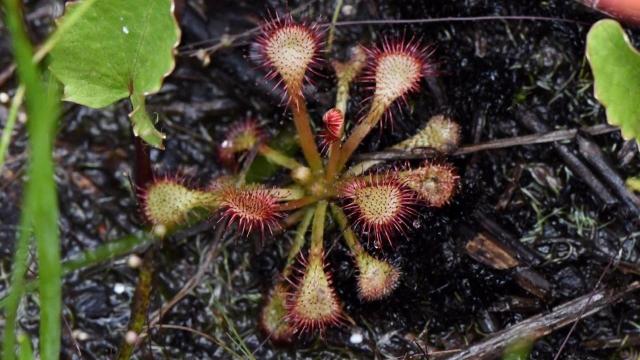 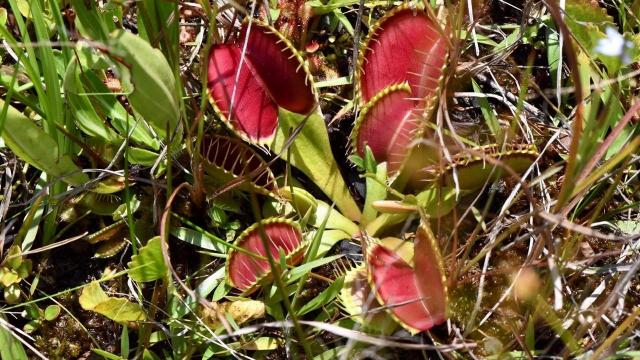 In the same wet soil where I found orchids, there were jewel-like sundews (Photo 3) and the most vivid red Venus flytraps I have photographed. (Photo 4) 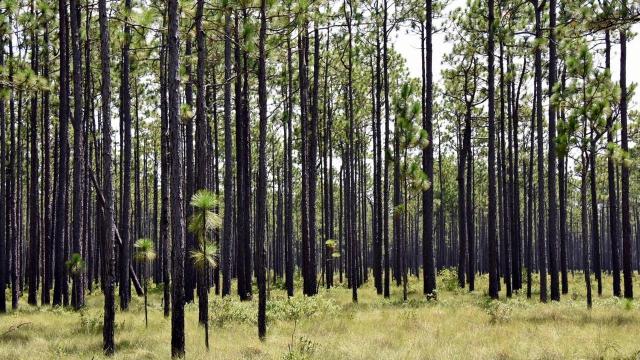 To walk in the beauty of a longleaf savanna is reward enough on any road trip. (Photo 5) 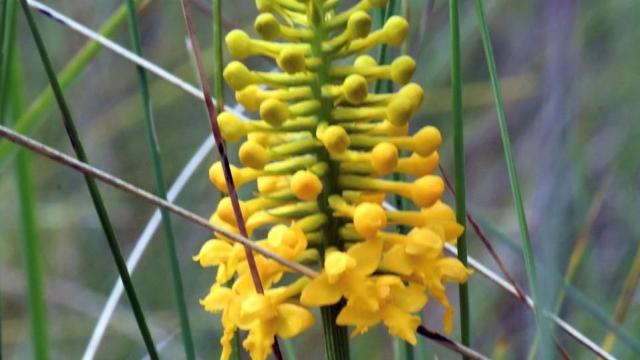 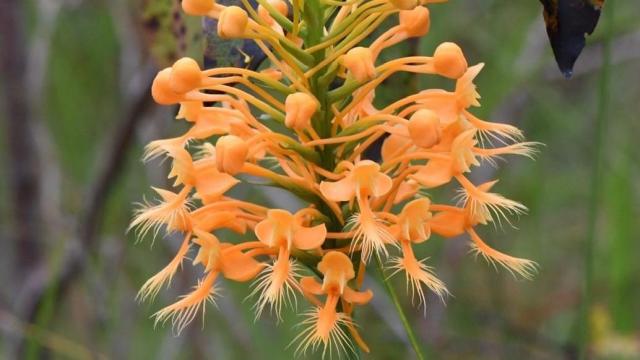 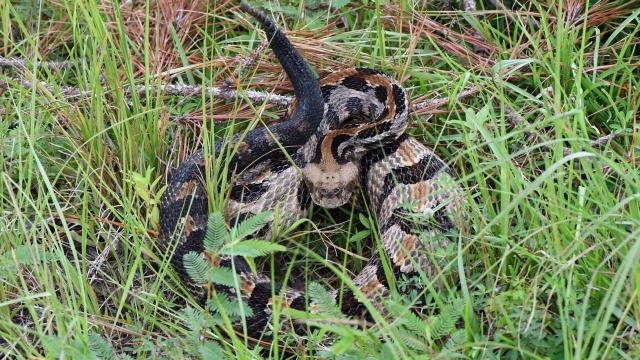 Just when I thought the morning couldn’t get any better, I saw grass moving about 10 feet away and saw the unmistakable markings of a timber rattler. I learned years ago to maintain a smart “social distance” between me and such members of North Carolina‘s natural community. Given the opportunity, they will avoid contact and move away. The timber rattler, also known as the “canebrake” rattler in the coastal plain, is a venomous snake, but an animal to be appreciated and protected in its natural habitat. (Photo 9) 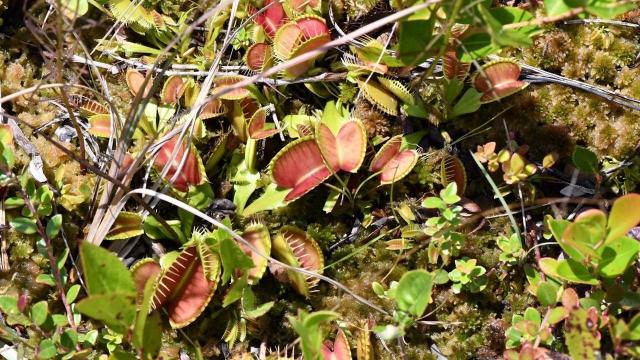 Remember, a square meter of longleaf pine forest can be inhabited by up to 40 plant species (Photo 10). Here, Venus flytraps, sundews and other unique plants grow in moist sphagnum moss. This sight alone is certainly worthy of a road trip!