TOM EARNHARDT: How to celebrate? Take a lesson from nature 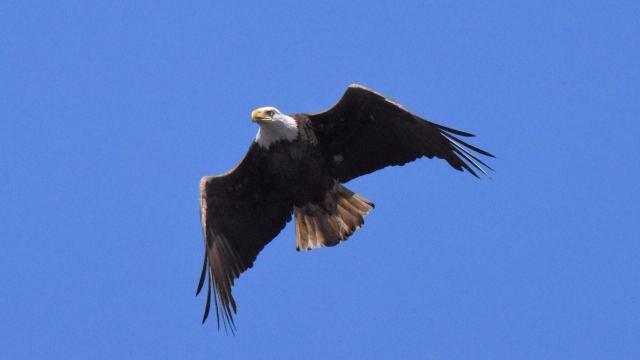 The Fourth of July has always been special. There are other national holidays, with religious or secular significance, but because it occurs during the warm vacation months Independence Day generates more picnics, concerts, parades, and fireworks than the others. This year with a pandemic, a troubled economy and an important national conversation about equality and racial justice, we have a lot on our plates as a state and nation. Celebrations this summer will be different and more subdued as large gatherings are put on hold because of the coronavirus.

As we observe the Fourth in our own ways, I remind myself that nature also knows how to throw a party and mark important events. Granted, festivities in the natural world may not always coincide with our Independence Day, Christmas, New Year’s Eve or Presidents’ Day, but I offer some examples of celebration in the wild. You may question whether nature is capable of putting on a big soirée. After looking at the “evidence” below, I’ll let you draw your own conclusions.

As you’ve likely observed, we humans are particularly fond of celebratory sound in the form of great music, roaring engines and even fireworks. We also like to celebrate with “over-the-top“ decorations like garlands, colorful banners and lights at Christmas. We are attracted to parades with marching bands, military armor, and brightly colored headgear. Finally, when we really want to pull out all the stops, we put on shows with aircraft performing aerobatics and flying in formation.

With all due respect to the ways you may be used to observing the Fourth, you can’t hold a candle to nature! Let me start with sound. Almost any night in July, go to an isolated pond or freshwater wetland anywhere in North Carolina, preferably well away from a shopping center or interstate highway. I can almost guarantee that you will hear deep baritone voices singing “chug o’ rum...chug o’ rum...chug o’ rum.” Just last night, in Raleigh, I heard bullfrogs in a creek near our house. Listen closely, and you’ll also hear smaller frogs with equally distinctive voices.

North Carolina is home to more than a dozen species of cicadas, and during the summer you are likely to hear a circadian chorus. Some sing in the heat of the day, while others provide nocturnal music. Additional members of the night chorus include North Carolina’s several species of owls. If you want to experience an owl symphony, try spending a night on the Roanoke River near Plymouth, or along the Neuse River near Kinston. Even on small waterways, like Morgan Creek in Chapel Hill, you can often hear multiple barred owls chanting “who...who...who cooks for you?” Biologists may tell you that cicadas and owls are trying to attract mates, but what if they are just having a good time?

We humans like to decorate, but nature does it better. Is there anything more grand than an entire mountainside covered with rhododendron during the month of June? And have you ever seen large patches of flame azalea—oranges, yellows and golds—on North Carolina‘s highland “balds.” During the same months across much of eastern North Carolina you are likely to encounter ditches lined with beautiful rose mallow. If such displays of color are not indicators of a natural celebration, I don’t know what it is.

It may also be coincidence, but around the Fourth of July nature tends to break out the red, white, and blue in both birds and wildflowers. There are red cardinals, summer tanagers, and scarlet tanagers. Lots of coastal birds dress in white, but my favorite is the great egret. Tar Heel birds wearing blue include indigo buntings, blue jays, and bluebirds. Many of our most beautiful wildflowers are red, but none are more stunning than columbine or the deep red Gray’s lily on our highest northwestern peaks. Throughout the summer, nature also flouts several spectacular white flowers—southern magnolia, fairy wand and spider lily. Finally, the natural world of North Carolina offers multiple blue wildflowers, including spiderwort, monkshood, and blue flag iris (our largest native iris).

I told you that Nature is also into “armor” and showy military headgear. During warm months there are displays of shiny armor inland and on our coast. Most North Carolinians have seen our state reptile, the eastern box turtle, lumbering near a hiking trail, or perhaps crossing a road. North Carolina is also home to 20 other freshwater turtles with various carapace (the hard upper shell) shapes. In coastal waters you can see loggerheads, green turtles, and the giant leatherback. Five years ago on the Fourth of July, my wife and I watched a magnificent leatherback turtle, perhaps 8 feet in length, surface several times near Cape Lookout. Nature gave so many turtles to North Carolina that they must be part of a celebration.

The first wildflower to totally capture my imagination in the 1950s was the Turk’s-cap Lily found along many mountain roads and the Blue Ridge Parkway. It may be our most spectacular summer wildflower—reaching 5 to 8 feet in height—often with more than a dozen speckled orange blooms. I’ve seen lots of marching bands and military parades, but none with headgear that can compete with the shape and colors of the Turk’s-cap lily.

Have you ever seen the Blue Angels or Thunderbirds perform? Nature also puts on air shows throughout the year. I don’t know what is more awe inspiring and celebratory than a sky full of pelicans or black skimmers on the edge of the Atlantic. Year-round it’s also possible to see a resident bald eagle high in the sky almost anywhere in North Carolina. During our cold months, from Thanksgiving to President’s Day, the sight and sounds of tens of thousands of swans and snow geese in the air at the same time will make you forget human celebrations.

Other natural air shows that can be seen in wild places are much smaller, but equally magical. Several years ago near Elk Knob State Park I was attracted to a roadside patch of wildflowers, including Joe-Pye weed, ironweed, and Turk’s-cap lilies. As I walked closer to the flowers, dozens of large butterflies—swallowtails, fritillaries, and monarchs—arose in unison from the wildflowers. To this day, I cannot remember more beauty in a small place. Nature had to be celebrating something.

If you still doubt that the natural world has the ability to throw a party or put on a show, I don’t know what else to tell you. From my experience, no matter how, or where, you celebrate the Fourth of July, Labor Day or New Year’s Eve, the natural world can top it! This week as we celebrate Independence Day here in North Carolina, take a few minutes and invite nature to be part of the festivities, or better yet, see how nature is celebrating. 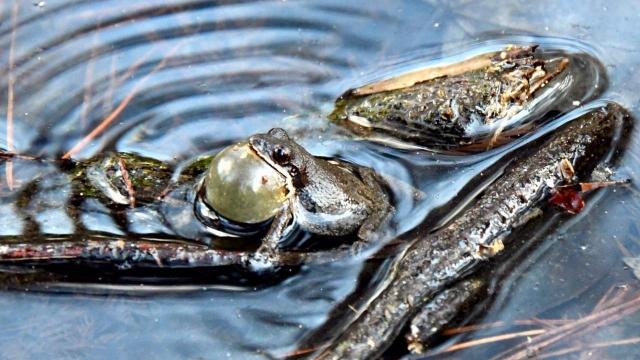 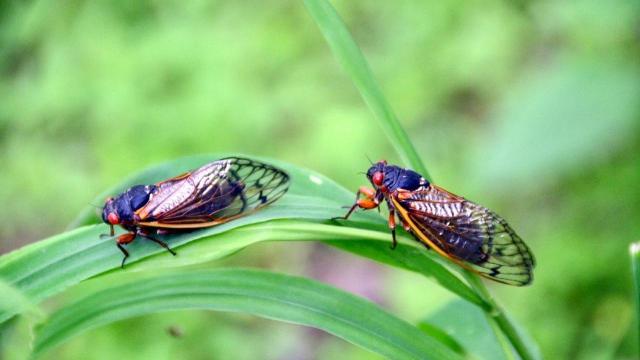 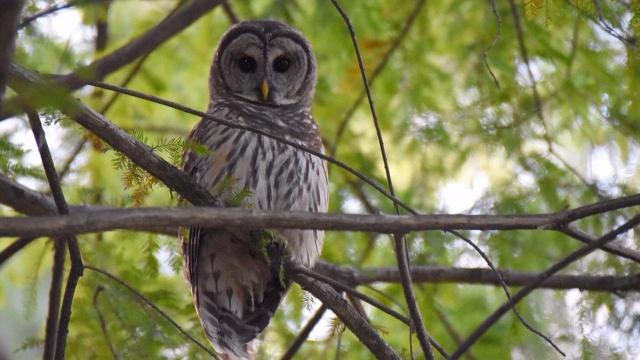 There are many great voices in nature, but no summer songs of celebration are better than those of frogs (photo 1), cicadas (photo 2), and owls (photo 3). 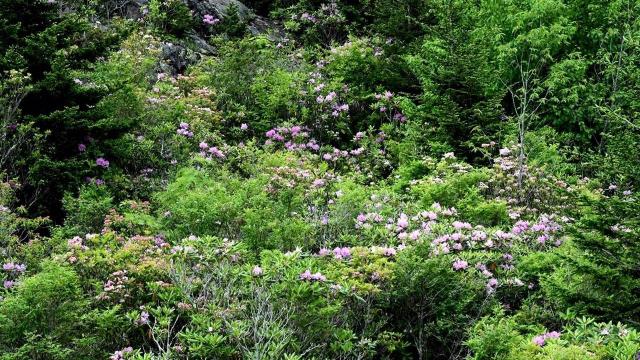 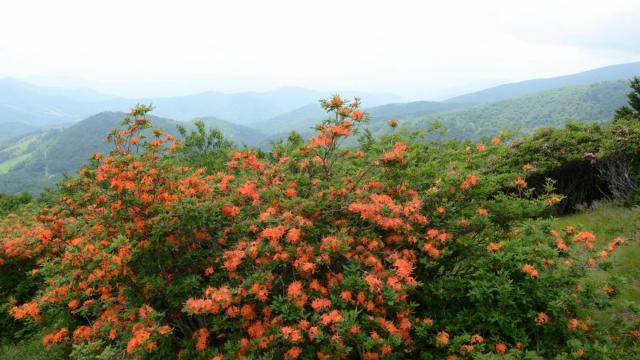 Nature knows how to decorate hillsides with Catawba rhododendron (photo 4) and with “burning bushes,” like this fiery flame azalea on Roan Mountain (photo 5). 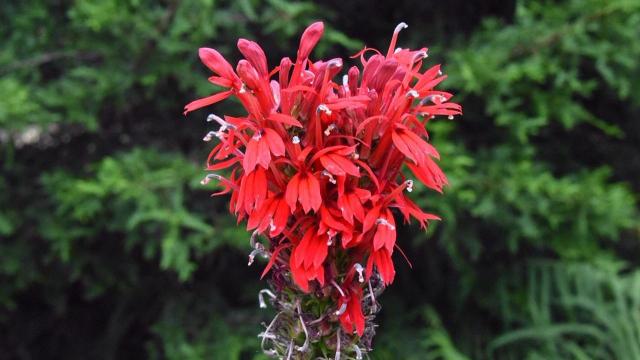 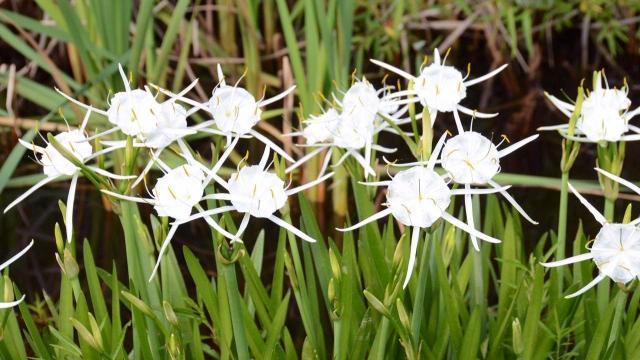 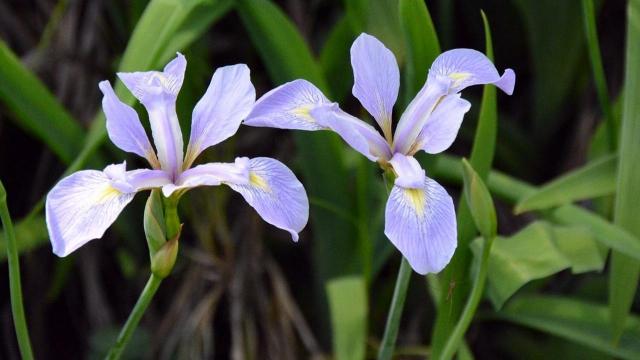 During spring and summer nature displays many patriotic combinations of red, white, and blue in the world of birds and wildflowers. A good selection native wildflowers would cardinal flower (photo 6), spider lily (photo 7), and blue flag iris (photo 8). I photographed these spider lilies in a Craven County wetland and the blue flag iris on the edge of a Hyde County canal. 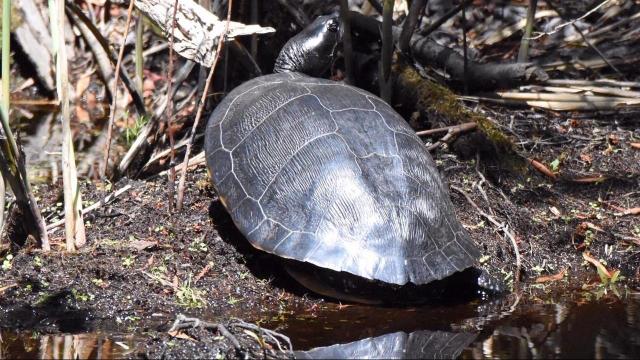 With several species of giant sea turtles visiting our shores each summer, and some 20 different freshwater turtles, lots of Tar Heel “armor” can be included in nature’s parades (photo 9). 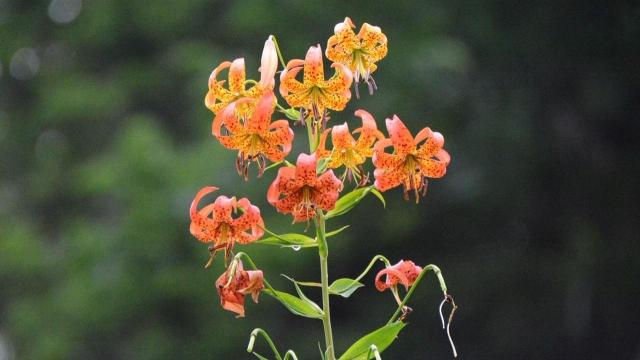 The Turk’s-cap lily is arguably our most spectacular mountain wildflower of summer, reaching up to 8 feet in height with multiple blooms (photo 10). 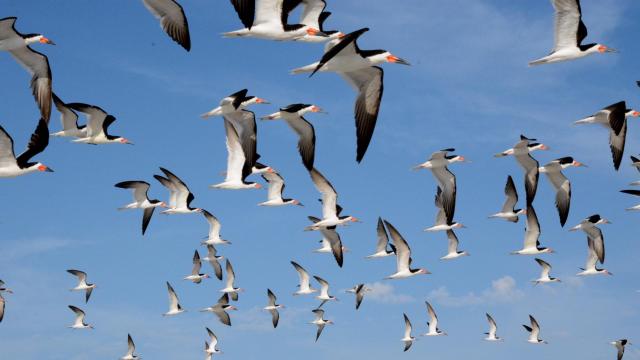 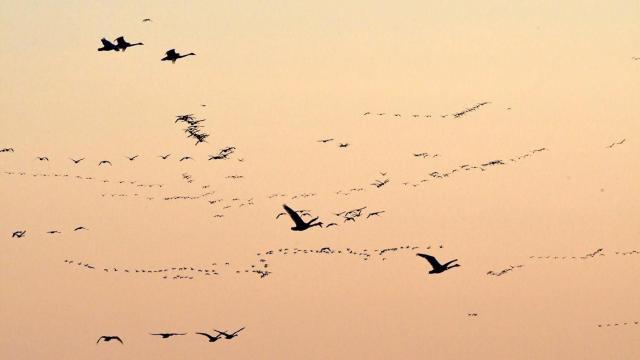 Finally, from the mountains to coast, nature loves air displays to celebrate important events. Bald eagles can be seen across North Carolina from the Blue Ridge to the Atlantic (photo 11). Among our most graceful birds are black skimmers shown here, which I photographed near Wrightsville Beach ((photo 12). Tundra swans and snow geese celebrate winter holidays with breath taking aerial displays (photo 13).