Cary, N.C. — Despite a nationwide survey showing vaccine hesitancy amongst parents, local pediatricians are preparing for the wave of appointments and are concerned that demand might outweigh supply.

Chapel Hill Pediatrics is one of many doctor's offices that will begin offering the vaccine to young patients.

At Chapel Hill Pediatrics, it’s not a question of if parents will get their kids vaccinated, but when. Pediatricians have already secured 1,200 appointments for patients by the end of this week.

Health Park Pharmacy in north Raleigh took a delivery of 900 doses of the Pfizer vaccine for young children – and they already have between 1,400 and 1,500 appointments lined up this week. No walk-ins will be accepted, the pharmacy said.

Several pediatric centers in Cary and Apex already had waiting lists of more than 700 families.

State health officials say North Carolina should receive more than 411,000 doses in three waves. With an estimated 892,795 children eligible for the vaccine, those doses could get 46% of kids vaccinated within the first few weeks.

Dr. Hope Seidel with Cary Pediatrics says her practice had 900 doses available on Wednesday and 1,300 children on their coronavirus vaccine waiting list.

"A lot of our patients have questions, it's why we're so thrilled that they are asking them here in the office instead of accessing the internet and other places to get the most up-to-date information that we're seeing," she said.

Some parents are already eagerly calling to ensure their children get access to a vaccine in the first wave.

Ashton Papas was excited to get his coronavirus vaccine in Cary on Wednesday. His father said they had been concerned about his health because "he's the kid that catches everything."

WRAL News talked to two other families who came to Cary Pediatrics on Wednesday to vaccinate their child who was just approved.

"I was just waiting and reloading the screen, trying to figure out, and I didn't care where it was. I was willing to drive," said Jessica Davis, mother to 10-year-old Will. 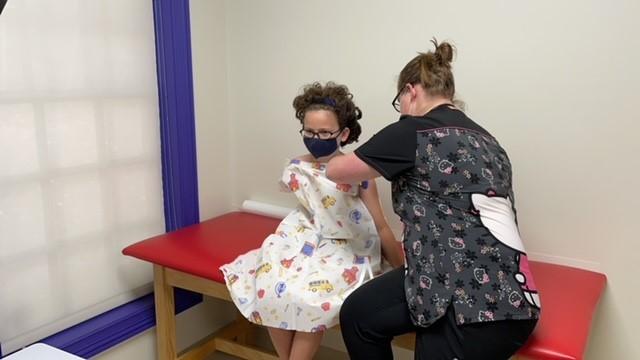 As soon as she saw the appointment pop up on her screen, she scheduled Will to get his shot. She said it's a relief that Will got his first dose on Wednesday so they won't have to be as worried about masking.

"Well, I mean, you put kids in car seats, right? And you take them to the doctor, and you try to teach them right from wrong and how to do basic things," Davis said. "This is just another one of those basic things that as a parent we can do for our children."

But, a survey from the Kaiser Family Foundation found that only 3 out of 10 parents of children ages 5 to 11 will vaccinate their children as soon as they can. But, health experts encourage parents to reach out to their pediatricians.

"I think it's really important for our patients and their parents, who are concerned, to really have that dialogue with their primary care provider and to ask those questions ... that is maybe causing some of that hesitancy," said Rafel Otero, the practice director of Cornerstone Pediatrics.

Otero said parents should feel comfortable and have that dialogue with their child's doctor.

"Families are going to start gathering for the holidays and so the sooner we can get kids protected with the COVID vaccine, the better we feel," he added.

Other parents who talked with WRAL News said they didn't want their child to be one of those rare cases of severe illness or death.

“Seven hundred children have died from COVID-19. So we don’t want to lose another child to this disease,” said Mary Braithwaite, a pediatrician at Chapel Hill Pediatrics.

The phones are ringing off the hook about the vaccines for children ages 5-11. Braithwaite says despite a little apprehension from some, their spots are filling up quickly.

“Fortunately, Chapel Hill Pediatrics is among Wave One. We will have early access to vaccines,” she said.

Their offices in Chapel Hill and Durham are being allocated first round doses, putting them in the first wave of pediatric vaccine deliveries. This is in part due to its outreach over the past nine months, getting more than 6,000 people vaccinated in hard-to-reach communities.

“It’s important because when you’re hesitant you may not be very eager to seek out the answers or seek the vaccine. So we need to bring it to you,” said Braithwaite, who says they will also bring pediatric vaccines to schools in their area.

The pediatrics team has about 300 appointments lined up for Thursday, 600 for Saturday and 300 more for Sunday.

“So we could in theory vaccinate 2,100 children if we had enough vaccines 2,100 kids," said Braithwaite. "The contingency is not whether there are parents who want to do it but if we can get the vaccines from the state.”

It’s a familiar place and space for children. Parents trust their pediatricians for almost all the answers.

“We’re getting lots of questions from parents," she said. Parents want to know if children need the vaccine, for example, since data shows children don't often get as sick as adults.

"We tell them: Absolutely," she said.