Stories can connect us on Father's Day 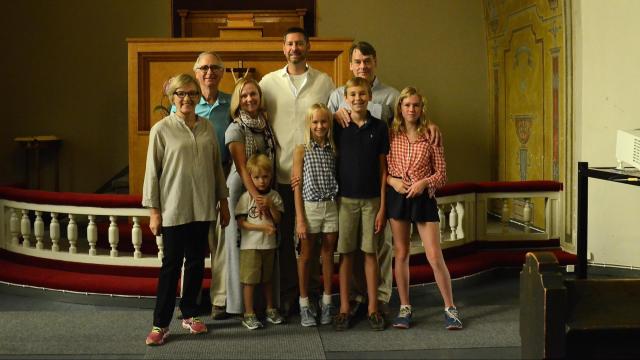 Three years ago, my father transcribed over 200 letters written between February 1918 and January 1919 from his Uncle Milton Ogburn and Uncle Ira Ogburn to their parents (my great grandparents). With no access to telephones or email, Milton and Ira's father and mother, J.S. Ogburn and Ida Thain Ogburn, asked them to write home every day just to let them know not to worry about their safety. They did. In one excerpt of interest in the era of a global pandemic, Uncle Ira wrote on October 15, 1918,

“Dear Mama, They are holding down the influenza pretty well out here so far. We get our throat and nose sprayed every day and have been sprayed for a good while. We have not got any cases in our camp or Vancouver as I know of. Vancouver is the only town they will let us go. Portland has about 60 cases. They have stopped all shows and public gatherings…”

I imagine during the transcription of the letters, some written in pencil and hard to read after 100 years in a North Carolina attic crawlspace, there were moments my father wondered whether he really needed to do as many as he did. They became repetitious, understandably. But like many things my father does in his quiet way, he had faith that there was value, even if he might not live to hear that irst-hand.

The year before he transcribed those letters, in order to commemorate he and my mother's 50th anniversary, they invited the extended family to spend a week in Finland walking the paths and sites they had walked during their courtship and importantly, telling the stories of that time. (The photo accompanying this post was taken that summer in the church where my grandfather Kusti Laitinen officiated their wedding in 1965.)

On my father's recommendation, during this quarantine we are all under, I read Tim O’Brien’s book, “The Things They Carried,” which won the National Book Award in 1979, part memoir, part fiction about O’Brien’s service during the Vietnam War. It begins with the narrator providing an inventory of the items (a love letter, photo, Bible, malaria tablets, comic books…) specific young men carried with them to a war that would more often than not define their lives.

The book planted the seed for contemplating what parents and grandparents plant in us, intentionally and unintentionally, and what we then in turn plant in our own children.

It is something to think about, especially this Father’s Day, when many of us are hesitant to celebrate in-person with parents and grandparents more vulnerable to the effects of this century's most widespread pandemic. Three months into a quarantine that will likely only continue, with a short pause over the summer, into another fall, winter and spring, it is oddly quiet—without the normal things that pull us away from being in a more contemplative space.

In other words, it might be the perfect moment, to acknowledge to dad all the fruit that's been harvested with his many careful years of planting.