New York — The white medical tents of Samaritan's Purse can be seen against the city skyline – a stark reminder of the unprecedented situation New Yorkers are facing. Officials announced that more people in New York have now died of COVID-19 than the unfathomable tragedy at the World Trade Center in 2001.

For many New Yorkers, seeing a hospital in Central Park is surreal.

'It's really an honor': North Carolina medical professionals are helping in NYC

"Central Park is like hallowed ground in the heart of the city," said Ken Isaacs, VP of Programs and Government Relations for Samaritan's Purse, a North Carolina-based organization founded by Franklin Graham.

While so many people are safe at home, Isaacs and many other North Carolinians have traveled to the epicenter of COVID-19 in New York City.

Isaacs has traveled to some 150 countries across the globe, organizing field hospitals and aid for pandemics like ebola. But he never imagined he'd be providing pandemic aid in America, particularly in New York City. 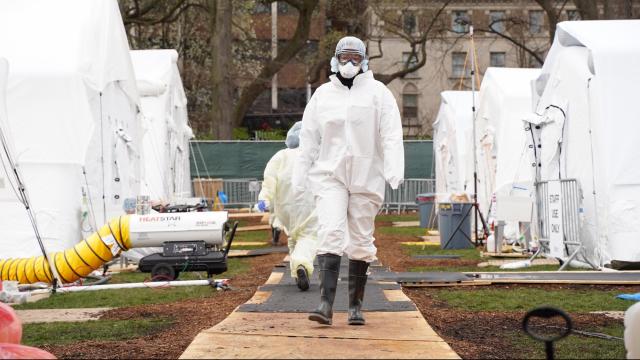 "I never imagined it'd be for infectious disease," he said.

Isaacs always wears a mask, only removing it to eat or drink, or once he gets home and has decontaminated himself. He said,"I am in a 100% COVID-positive zone, surrounded by infectious patients."

Learning from their team in Italy

New York is facing a precarious time, according to Isaacs. "It looks like the numbers could be peaking. In Italy, where we also have a COVID-19 facility, cases have peaked and numbers are going steadily down."

However, emboldened by the idea of a peak, New Yorkers are going outside and walking around again, according to Isaacs. This raises the concern that New Yorkers may not peak after all, but keep spreading cases.

Another consideration: When the disease peaks and the number of cases starts to go down, the deaths will start rising.

"We have an advantage having a hospital in Italy, where they have a disease trajectory about 10 days ahead of us," he said.

Samaritan's Purse's Italy teams are learning things about patient care and can communicate those lessons in real-time back to the New York City field hospital.

The park is adjacent to Mount Sinai Hospital. "With nearly half of all U.S. cases occurring in New York City, the hospitals are overrun and in desperate need of added capacity," said an official from Mount Sinai.

Franklin Graham, founder of Samaritan's Purse, visited the Central Park field hospital himself and could be seen praying with medical workers and patients. 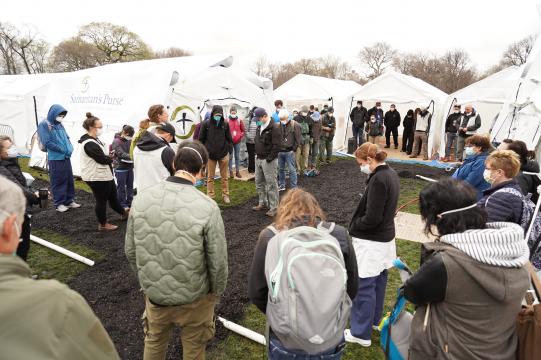 He wrote, "Today I went to New York and checked on our team working at the Samaritan's Purse Emergency Field Hospital in Central Park. They are doing such an incredible job! Each one of these men and women count it a privilege to be there, helping people in Jesus’ Name. Our hospital had 45 patients this afternoon, with ambulances arriving regularly from Mount Sinai."

He asked for people to continue to pray for all medical personnel working tirelessly in the face of the pandemic.

Isaacs said, "We've got the Billy Graham Evangelism Association chaplains here who are available for patient discussion and prayer."

Partnering with other New York churches

Isaacs said Samaritan's Purse was talking about building another field hospital in the historic Gothic walls of St. John the Divine Cathedral, including using some space in the crypt as a staging area. However, plans changed when Mount Sinai requested that, instead, they expand the capacity for already-existing rooms in the hospital system.

Samaritan's Purse has partnered with several other local churches, however, that are helping homeless COVID-19 patients.

It seems symbolic that during the holy week for multiple religions, these churches and religious groups are serving during an actual 'plague.'

Rt. Rev. Clifton Daniel III of St. John the Divine Cathedral said the pandemic calls to mind the season of Lent. "Surely when this Lenten season of coronavirus is past, the joy of Easter and new life will emerge," he said.

In the meantime, Isaacs said he's holding onto his faith and, in this strange and frightening time, the best thing he knows to do is serve others.