Raleigh, N.C. — State health officials announced they were reducing the official count of completed COVID-19 tests Wednesday by more than 200,000 after discovering a "discrepancy" in data provided by one of the country's largest private labs.

The correction is the latest in a string of fixes the N.C. Department of Health and Human Services made to its data in recent days as the pandemic entered its sixth month in the state. In a press briefing Wednesday afternoon, DHHS Secretary Dr. Mandy Cohen stressed that the change to total testing numbers did not impact two other key metrics – new positive cases and the percentage of tests that come back positive – because they're calculated through a separate process.

The source of the error, which state officials say dates back to April 24, was a daily manual data submission from the Burlington, N.C.-based LabCorp. In a statement, LabCorp Chief Medical Officer Brian Caveney said that at-home test kits from out of state, processed in the firm's North Carolina labs, were mistakenly included in the numbers sent to DHHS.

State health officials reached out to the company over the weekend after discovering the discrepancy and worked with them to fix it over the last few days.

"We quickly corrected the issue and provided the updated manual reports to NCDHHS," Caveney said in the statement. "LabCorp's daily electronically reported data was accurate and unaffected by the error, and this issue does not affect other states or any results reported to patients or their providers." 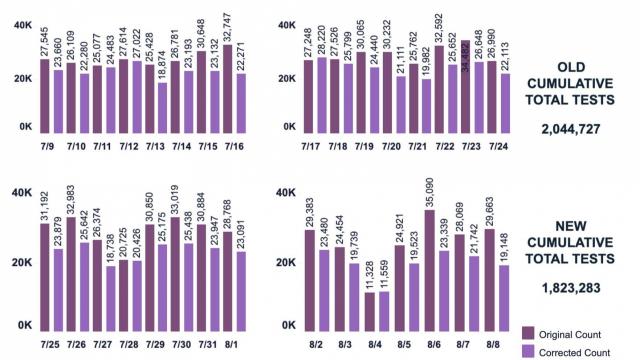 The manual submission of aggregated testing data is one of several ways DHHS collects data that feeds into its public-facing COVID-19 dashboard.

Cohen said Wednesday that patient-level testing data is separately provided to the agency via an electronic surveillance system that was unaffected by the error. Individual positive cases, either electronically submitted or manually entered, are tracked through this system.

As for its daily percent positive rate, the agency calculates that figure based only data submitted electronically – and only for labs that report both positive and negative results. The agency has used that same methodology for months.

Cohen said electronic results used in the calculation of the percent positive rate make up about 80% of total patient-level tests. The remaining positive results are manually submitted and hand entered by DHHS staff.

But the change in the cumulative count of total tests, which as of the Wednesday correction went from more than 2 million to more than 1.8 million, is far from trivial.

After shedding more than 10% of its total tests, the new figures show North Carolina is falling behind other states across the country in per capita testing.

Adjusting for population, North Carolina had held steady or gained ground in testing compared to the rest of the country since June 28. On Sunday, the state ranked 15th overall in per capita testing among 50 states, D.C. and Puerto Rico, based on data from the COVID Tracking Project analyzed by WRAL News.

That streak ended Monday, when low testing numbers in recent days caused the state to drop down a spot for the first time in more than a month.

But that was before the correction, which as of Tuesday ranks the state 26th nationally, hovering just above the bottom of the pack.

Cohen said the reason for the decline in testing – corrections aside – wasn't entirely clear. After a reported slowdown in test turnaround time, she said some patients may have been less inclined to seek testing for COVID-19.

But she said the wait for results has decreased to two to three days on average, which she said she hopes will encourage more people to seek testing.

"We are standing up more and more free state-funded test sites all the time, and we will continue to do that," she said.

In early August, the agency announced that its data on the number of patients hospitalized with COVID-19 had been off for about a week in late July because of a double-counting issue with at least one Charlotte-area hospital. The corrected data posted on Aug. 2 shifted totals downward overall by about 3%. It also dropped a previously reported record of 1,291 patients on July 29 by 55.

In a statement, DHHS said the error was discovered through "ongoing quality control measures," noting the agency has been moving hospitals to an automated reporting system. Hospitals previously reported the data manually in response to a daily survey.

Health officials posted another set of corrections on Aug. 6, a day after discovering some labs failed to submit test results from Aug. 2 to 5. The updated figures added about 1,400 cases over that period, more than doubling the number of cases tracked by specimen date during those dates.

Although these numbers may change slightly as lagging test results catch up, health officials say this was more than just additional test results trickling in.

"In short, this data is complex and there is room for error at multiple stages in the data pipeline, which is why the Department engages in regular quality control measures and is transparent when those errors are detected," DHHS spokesperson Amy Ellis said in an emailed statement Aug. 6. "Yesterday the team identified lab reporting omissions and is now fixing the issue."

In both cases – for hospitalizations and new case counts – DHHS noted the changes on its dashboard, and DHHS Secretary Mandy Cohen noted the case count issue during a press briefing Wednesday.

Aaron McKethan, a senior fellow at the Margolis Center for Health Policy at Duke University and a former chief data officer at DHHS, said mistakes like these aren't uncommon in cases where "data elements from multiple sources must come together very quickly, and can often change."

“The best way to respond is to have systems in place to detect errors, correct them, and clearly communicate what happened. I think DHHS and labs are attempting to do that here in good faith," McKethan said. "Handling data reporting problems in the right way can support rather than undermine public trust.”