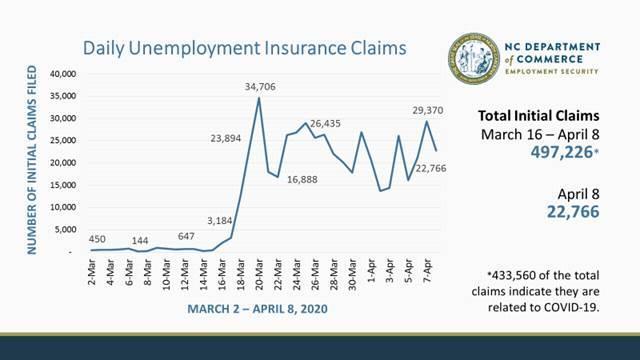 Federal benefits for people not typically eligible for unemployment, including self-employed people, independent contractors and people who've already exhausted the usual 12-week maximum for benefits, won't be available for a few more weeks, the officials said.

The online filing system for the "Pandemic Unemployment Assistance" program should accept claims starting around April 25, they said.

State officials have said benefits from both of the programs will be paid retroactively so people get the full amounts they're eligible for, going back to the start of April.

"DES is working as quickly as possible to modify its technology systems to make sure people can apply for these benefits and receive timely, accurate payments," DES said in a news release. "Individuals due any benefits prior to the full implementation of these programs will be paid retroactively."

A third federal program, Pandemic Emergency Unemployment Compensation, will provide an additional 13 weeks of benefits on top of the 12 weeks allowed now under state unemployment laws. The division hasn't laid out a time line yet for this program but said it will update people when it's ready to accept online claims.

People continue to report difficulty reaching people at unemployment call centers. The division has gone from handling some 3,200 claims a week to more than 20,000 a day, and nearly 500,000 claims have come in since March 16.

State Sen. Jim Perry, R-Lenoir, put out a statement after DES timetable announcements Thursday, calling problems at the division "a textbook case of government inefficiency" and calling on Gov. Roy Cooper to fold state employees from other departments into the division to help handle call volume.

Perry said call centers should operate 16 hours a day, seven days a week. They've been open 8 a.m. to 5 p.m., though callers in the substantial queue at 5 p.m. mean the centers stay open later to handle those calls, and the division's assistant secretary has said he planned to add hours.

Perry said his office did an informal survey of constituents applying for benefits and found 90 percent had problems, either online or on the telephone.

"These people applied for benefits weeks ago after spending hours working around a crashed website and clogged phone lines," he said in a statement. "Now, we’re told it could take another a couple of weeks for them to apply for a second time after being initially denied. ... These citizens don’t have time to wait for benefits, they need them now."

A separate federal program, the Paycheck Protection Program for small businesses, has also seen delays, though it's just gone into effect. Banks are processing those loans.