SETH EFFRON: Another inauguration comes to heal a divided nation 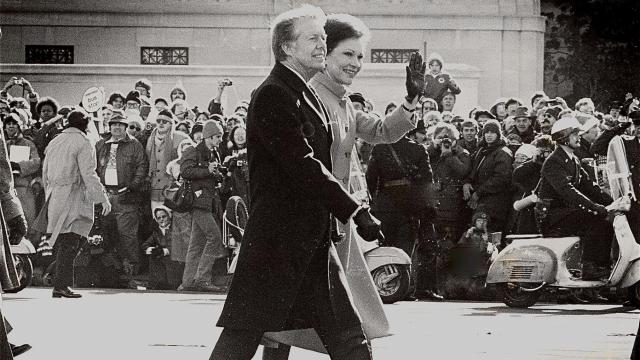 EDITOR'S NOTE: Seth Effron is opinion editor for the Capitol Broadcasting Company. He covered the 1977 presidential inauguration of Jimmy Carter for The Fayetteville Times.

The circumstances, at first glance, might seem curiously aligned.

Forty-four years ago a bitterly divided nation – torn by the fighting in Vietnam and reeling from a corrupt and controversial presidency where a resignation cut-short a likely impeachment – readied to inaugurate a new, duly-elected president. A brooding, dark presence of Richard Nixon in the White House – while gone for more than a year – still loomed large in January 1977 as Democrat Jimmy Carter prepared to take the presidential oath.

Today, in our nation’s capital, a corrupt, twice impeached president is leaving office. The dark presence, even as Donald Trump makes his stealthy exit, hangs like a toxic smog over Washington.

But the mood and atmosphere in Washington today is very different than the Washington on inauguration day, 1977. I know. I was there 44 years ago covering the presidential inauguration for The Fayetteville Times.

There’d been a bit of healing since Richard Nixon’s August 1974 resignation and Gerald Ford’s defeat in the 1976 election. Washington, as typical for the pre-inaugural days regardless of the political party assuming power, was festive.

While the COVID-19 pandemic has certainly dampened the opportunities for celebratory gatherings, it is not the main culprit to blame for the anxious tension that envelops the inauguration of Joe Biden.

It is the treacherous deceits and lies, ignited by President Trump and fanned by his enablers, that make this inaugural so vividly distinct.

Fear – front-and-present worry about the safety of the new president and others gathering – is very real today. Thousands of National Guard soldiers are positioned – to protect the inaugural crowd and our nation’s capital from a potential armed mob – bigger, more heavily armed and worse than the one that overran the Capitol just days earlier.

Even Senate Republican Leader Mitch McConnell, once one of Trump’s head cheerleaders, is acknowledging that it was “lies” fed by the president that fueled the deadly mob looking to overturn the election results.

“The mob was fed lies," McConnell said. “They were provoked by the president and other powerful people, and they tried to use fear and violence to stop a specific proceeding of the first branch of the federal government which they did not like.”

The evening before the presidential swearing in 44 years ago, my security clearance and press pass allowed me to peer out from behind the lectern where the president, just hours later, would take the oath of office.

Beside me was an African American maintenance worker, Tarboro native Joseph Williams. He was chopping the ice that had formed just at the spot where the next president would be standing. “Everything will be smooth sailing,” Williams said as he swept away the remaining bits of ice.

Worries about ice on the inaugural rostrum seem frivolous amid the security worries today.

The pandemic and more presently the fear of deadly violence, has dampened the celebratory atmosphere that typically accompanies an inaugural. Museums, art galleries, restaurants are closed – both for health AND security fears. Festive balls and live performances will be “virtual.”

The grand display of a peaceful transition of power, the trademark of this nation’s stable democracy and an example to the world, will be much subdued. But it will go on and will be no less significant.

In that 1977 inaugural, Jimmy Carter started a tradition of walking along Pennsylvania Avenue from the Capitol to the White House that was repeated by EVERY president since, including Trump – until today.

The pandemic, coupled with security worries, led to cancellation of the usual post-inauguration parade.

But try as he might to darken this day in Washington, it won’t dim my memory. I’ll think of Joseph Williams when the next president, stands assuredly and firmly, takes the oath of office. It will not be a matter of personal adulation, but to “preserve, protect and defend the Constitution of the United States.”

An inauguration as a divided nation seeks to heal. We’ve been here before. We’ll move on again.