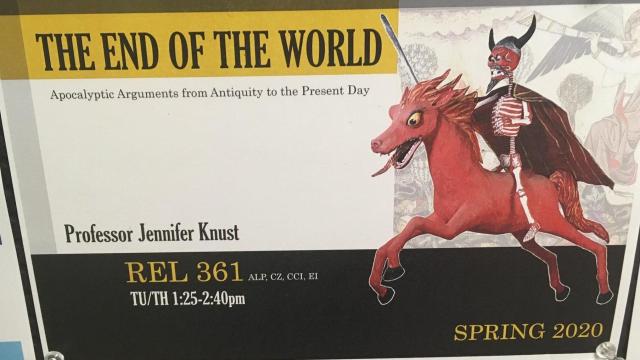 EDITOR'S NOTE: Scott Huler is senior writer at Duke Magazine and the author of several books of nonfiction, the most recent A Delicious Country, about retracing the route of John Lawson’s 1700 expedition through the Carolinas.

Where do we go for hope when it feels like the world is ending?

I saw a little poster about a Duke University class for the spring 2020 semester. “Religious Studies 361” with a simple title: “The End of the World.” I was hooked.

I asked Jenny Knust, professor of religious studies, how she got interested in teaching a course on the apocalypse: “Some combination of climate change and threats to our democracy, undermining of our commitment to one another, undermining of our joint effort to continuity, just made me mad,” she told me, “and I wanted to think about it and study it with a bunch of really smart students.”

LISTEN: 'Not Necessarily the End of the World'

So she offered the class, and she and a dozen-and-a-half Duke students studied Revelation in the New Testament and Daniel in the Old; they read Silent Spring, about apocalyptic pollution, and watched “Apocalypse Now.” They studied Waco, Jonestown, and the Shakers. It was a fascinating class, and Knust and the students brought a fierce energy to their studies, cheerfully acknowledging the coincidental timing of the class even when I spoke with them early in the term when people were terrified only by politics and the climate. (The DUKE magazine article is online here, page 24)

Then came COVID-19. It became harder not to feel a bit chilled by the class’s topic. Soon they were meeting online, but their connection remained. And once again, Knust felt action was required. She awoke at 4 one morning: “We have to say something,” she thought. “Because we’re living through this now.”

The students jumped. Between Knust and the students they drafted, honed, and created such a manifesto, which is now online. Recognizing that any current challenge is an ending but not the end, they wrote, “invites creative solutions, diagnoses of the circumstances that have led to this specific end, and ... compassion for those suffering.”

Meanwhile, I’m working from home, watching the world around me crumble, and trying hard, every day, to find something more demonstrative than, say, baking to model for my own children that, yes, things are scary, but there’s a way forward.

Then I hear from professor Knust about this manifesto. Her class stands tough. They declare: “Confronting an end-in-process with courage and hope rather than mere acceptance is part of our shared work.” Courage. Hope. It took my breath away. I was inspired.  I cried.

And I asked them to read it aloud.

Which they did, and I recorded that, put some music behind their voices and I put it online.

These are terrifying days. When in such days a group of people demonstrates courage and hope and is willing to share that in their own voices, you want people to hear it.