Protesters make their voices, and horns, heard over conditions at prison

Raleigh, N.C. — Protesters calling attention to conditions inside state prisons took to the streets to voice their concerns and honk their horns at Central Prison in Raleigh.

Julie Schneyer,organizer of the protest, joined the dozens of people who took part in the "social distance protest" in their vehicles as others held up signs while walking around the prison. She and others demanded an end to solitary confinement practices and improved food and medical treatment during the coronavirus outbreak.

"Over years and years, what we've seen in DPS facilities is systematic, ignoring of any kind of human rights," Schneyer said. 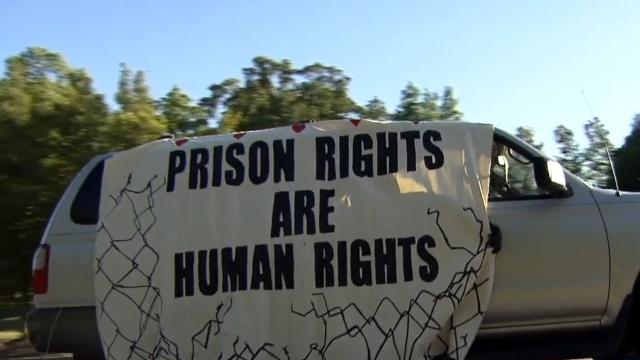 Schneyer and others said the conditions are particularly bad during the coronavirus pandemic.

"People certainly are extremely concerned, people are terrified behind the wall, they feel like they've been given a death sentence," Schneyer said.

Similar protests took place at the Neuse Correctional Institution in Goldsboro on Friday. That prison has one of the highest COVID-19 cases in prisons across the nation. Family members of prisoners in western North Carolina are also worried about them getting the virus. Bratton Caldwell said it would be a death sentence for his brother-in-law who has a history of health problems.

"He was calling and telling us they were still bringing prisoners in from another facility," Caldwell said in a telephone interview.

Protestors said it’s impossible for prisons to maintain social distancing and cleaning guidelines. Those behind bars should be released, Schneyer said.

"People are actually being exposed to modern-day slavery," Schneyer said.