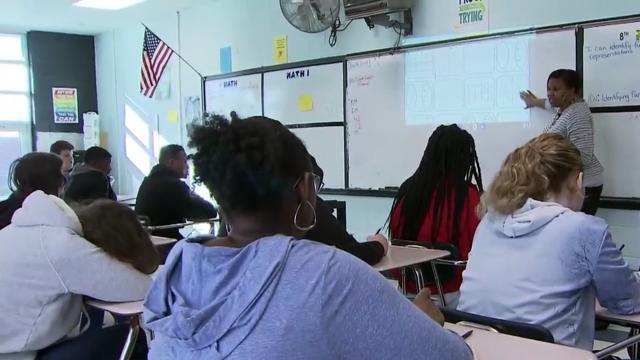 Raleigh, N.C. — North Carolina public school teachers and instructional support staff would get their annual step increases and a $350 bonus under a bill moving at the General Assembly.

They'd have a shot at another $600 bonus under Senate Bill 818, but that may depend on how Congress allows federal coronavirus funding to be used.

The bill encourages the governor to pay the bonuses out of a pot set aside by one of the federal coronavirus stimulus bills, but Gov. Roy Cooper's administration has already said he's not allowed to do that.

Legislative staff for the Republican majority disagree. This is one of several questions about the way federal coronavirus dollars can be spent, and Congress may change this guidance, but that's likely until at least next month.

Under the North Carolina bill, teachers would not get the annual percentage raises typically tacked onto their step increases. Republican budget writers are trying to rebalance the state's two-year budget with the expectation of a $4 billion revenue hit due to the economic shutdowns and long-term effects of the ongoing pandemic.

The bill essentially holds public school principal salaries where they are, since the new student testing and growth data their compensation is partially based on won't all be available from the current school year. Principal salaries would still be adjusted as needed based on the number of students at their school, the bill states.

The measure also encourages the governor to give non-certified personnel, like bus drivers, custodians and cafeteria workers, the $600 bonus, but there are questions about whether that will be allowed as well.

The North Carolina Association of Educators, which has organized large teacher rallies in recent years to call for increased education funding, is against the bill.

“The disrespect being shown to educators in this pay bill (SB 818) is egregious,” NCAE President Mark Jewell said in a statement. “Educators have been on the front lines of this pandemic from the beginning, making the meals, adapting the curriculum, serving the food and checking in on their students’ emotional and physical well-being."

Jewell said state employees are scheduled to get 2.5 percent raises this year, on top of the 2.5 percent they got last year, "when, again, we received nothing."

Educators could have gotten average raises of about 4 percent, including their step increases, between the current fiscal year and the coming one, but Cooper vetoed the GOP-backed budget bill last year, in part to press for larger increases. Legislative Democrats backed the governor, extending a budget showdown that, in many ways, continues now.

The new pay bill cleared the Senate Appropriations committee Wednesday evening and the Senate Rules committee Thursday morning. The next stop is the Senate floor. Then the bill would move to the House.

Senate Democrats called Thursday morning for more funding, with a particular focus on non-certified personnel. Some of them make less than the $15 an hour the state set as a floor two years ago for regular state employees.

Brown gave Democrats little hope of more, based on the state's revenue situation.

Several Senate Democrats also complained that they've not been given a full budget picture. Republican budget writers are handling parts of the budget piecemeal, passing small funding bills on high-priority items instead of working up a full budget, making it more difficult to understand how things fit together and the state's bottom line.

Republican leaders have said they want to handle crucial items now and revisit other budget issues later in the year, after the state's revenue picture comes into better focus.

State income taxes, like federal taxes, aren't due until July 15 this year because of the pandemic.