Despite losing a year's worth of paying gigs, two full-time musicians have found a way to spread kindness, keeping people's spirits up while also raising money for animals in need.

When bars and restaurants shut down in the wake of COVID-19, many peripheral businesses lost their incomes as well--including musicians.

"We were completely booked for the rest of the year and that came to a screeching halt," said Carolyn McShane, drummer and singer for local rock band Sayer McShane.

Described as "a potent mixture of Janis Joplin, Prince, Bonnie Raitt and Heart infused with Motown, funk, blues, soul and classic rock ‘n’ roll," these two women have made playing blues-based rock their full-time job for more than 23 years.

Now, like many others during this time, they are out of work. 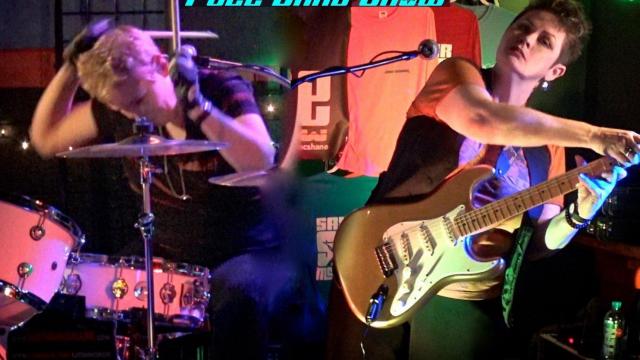 Each week, the band has been offering FB Live concerts and donating part of the proceeds to a different animal rescue, shelter or non-profit.

Even during a time when so many are struggling financially--including themselves--they still want to pay it forward and help the community.

"We have a lot of friends who are musicians full-time, and it's really just been devastating," said Kristin Sayer, lead guitarist and singer.

"On top of the economic component, it's just emotionally so distressing because when your art is your life and you can't play for people, it's just really... it's not fun being off. You want to reach the people," she said.

A bright side to their virtual concerts is that they've been able to reach people, not just locally, but across the globe.

"We wound up expanding our audience, and they are so happy that all the way from Ireland to Key West, they can tune in and watch us every week," said Sayer.

The women say it's therapeutic, even spiritual.

"Honestly, it brings to the forefront that arts aren't really optional. I think the arts have gotten people through this more than almost anything. They are essential," she said.

Empowered to make an impact during an anxious time

"I'm a big believer in always have gratitude for our gifts of being able to play music. Everybody wants to be a rock and roll star--ourselves included!" said Sayer.

The duo decided to "Pay it Furward."

In return, they've gotten cards and notes of gratitude from shelters who are struggling to pay for things like cat food and dog food due to the pandemic's impact on their own fundraisers.

The virtual concert fundraisers provided the women a way to make an impact without even leaving their homes.

They said they've gotten messages from people saying their regular weekly concerts are giving them strength to keep going.

The musicians believe when things happen in the world that you can't control, it's time to look at what you can control, step up and find a way to help.

These rock star women are providing a message of empowerment during a time when we all need a little inspiration.

A live show for WRAL viewers

The band performed live Sunday at 4 p.m. on their Facebook page, and it was shared on WRAL.com.