One of ReOpenNC's leaders splits with group, accuses others of 'nearly inciting a riot'

Raleigh, N.C. — A woman who has been an administrator of the ReOpenNC Facebook group posted to the platform Wednesday that she was leaving.

"This movement has taken a turn," Kristen Elizabeth wrote, citing the arrest of another group leader, Ashley Smith, at Tuesday's rally in downtown Raleigh.

Smith and others "deviated from the plan" in challenging police who asked protesters to stay off the sidewalk.

“In my opinion, it was borderline inciting a riot," Elizabeth said. "The protest became unhinged ... and Ashley was going on emotion, not logic.”

Smith and three others – Lisa Todd, 55, of Raleigh, Wendy Macasieb, 53, of Catawba, and Jonathan Dane Warren II of Indian Trail – were arrested as the rally wound down Tuesday afternoon. All are charged with resisting a public officer and violation of an executive order, and police said more arrests could be coming. 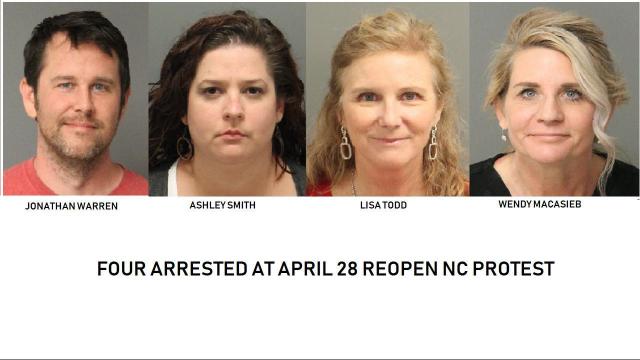 Warren was charged with damage to property. Police say he broke the gate and lock at the Executive Mansion trying to gain entry to the property.

ReOpenNC, which started as a Facebook group, wants Gov. Roy Cooper to lift his order keeping people at home and allow businesses to reopen. The current order expires May 8, but it could be extended. Cooper and state health leaders say trends in virus infections, hospitalizations and deaths need to improve before North Carolina can reopen.

The group believes the economic impact of the crisis outweighs the public health risk.

"We are a peaceful action group," Elizabeth wrote on Facebook. "I encourage anyone who knows this can be accomplished civilly to continue doing so without affiliation with ReOpenNC."