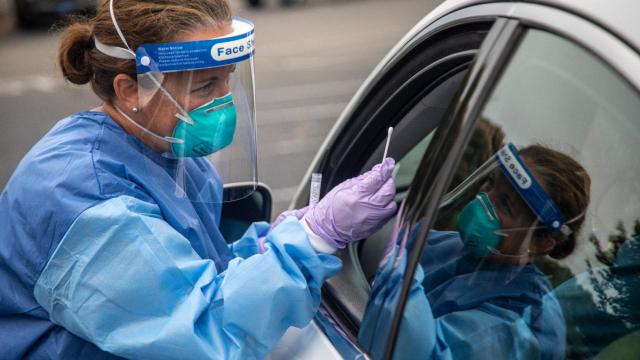 Infectious disease experts say timely, effective testing is critical for controlling a pandemic like the novel coronavirus — but North Carolina has struggled to keep pace since the beginning.

In mid-April, the Testing Surge Workgroup created by NC DHHS met for the first time to address the state’s coronavirus testing strategy.

The meeting came more than a month after the state reported its first confirmed case of the virus. At the time, testing was still limited — mostly conducted by local health departments, some of which had been using their own makeshift kits to collect samples.

Initially, the only lab in North Carolina that could process tests and confirm cases was the state lab, although hospital and commercial labs came online within weeks, and the state initially only distributed three testing kits to each county.

By March 18, a week after Gov. Roy Cooper declared a state of emergency and began issuing executive orders with coronavirus restrictions, private and public labs across the state had only completed 1,850 tests amid a nationwide shortage of testing supplies.

The purpose of the workgroup, documents obtained by the N.C. Watchdog Reporting Network show, was to create a comprehensive testing strategy for the state, including ways to survey testing capacity, identify communities in the state that had a high need for testing but low access and to coordinate a testing plan across all 100 counties.

In the intervening months, North Carolina has seen a surge of cases — especially at congregate living facilities like prisons, nursing homes and other types of long-term care facilities — and among workers at meatpacking plants and in other agricultural settings.

Although it has increased in recent weeks, testing capacity in North Carolina has remained low when compared to other states.

Compared to the rest of the country, North Carolina has consistently been at the middle or bottom in terms of per-capita testing, according to data from the COVID Tracking Project. And the state spent five weeks — from April 14 through May 22 — in the bottom quarter for per-capita testing; hitting as low as 45 out of 50 states, D.C. and Puerto Rico.

At the end of that same period, state officials moved to reopen the state in phases, something they had previously said they would do only if key benchmarks were met. But some experts say the data showing North Carolina was ready to reopen was limited because of the lack of testing early on.

“We want to see sustained leveling,” N.C. DHHS Secretary Dr. Mandy Cohen said on April 23, a point she repeated several times in following weeks, in describing what would be needed to justify reopening the state’s economy.

Asked as the state reopened in part on May 8 about what Cohen meant by this phrase, DHHS spokesperson Kelly Haight Connor said, “Sustained leveling means that over a 14-day period there were not significant variations in the seven-day rolling average trend line.”

But that use of the phrase based on the data that was available troubled some experts.

Lisa Gralinski, an assistant professor at the UNC Gillings School of Global Public Health, said in late May that “sustained leveling” has a specific meaning. It means “things are roughly under control, that nothing is getting worse,” she said in a May 28 interview.

“I wouldn’t say it’s what we are observing in terms of cases in North Carolina right now.”

On May 8, state officials introduced Phase 1 of economic reopening. On May 22, they initiated Phase 2. Since then, cases have grown dramatically and testing has rapidly increased across the state.

The N.C. Department of Health and Human Services started releasing the total number of patients tested, including those conducted by private labs and public health departments, on March 18. This figure only reflects labs that are reporting to local and state health officials. DHHS doesn't publish raw numbers detailing daily negative and positive tests from labs reporting both of these figures - just percentages. So WRAL is calculating the percentage of positive tests here cumulatively, instead of day over day, to avoid any potential skew of daily figures by either a lag in the reported number of positive/negative cases or a surge in positive cases from labs that don't report both positive and negative results. NOTE: On Aug. 12, DHHS announced a major correction to their testing numbers after discovering a discrepancy with their submissions from LabCorp dating back to April 24. The WRAL team is working to update this graphic to account for the changes, so updates have been paused until then.

Experts say the first step in controlling the spread of COVID-19 is to have enough testing capacity to identify people infected with the virus, which can potentially help them stop its spread by knowing where outbreaks are occurring.

Dr. Paul Kamitsuka, the chief epidemiologist at New Hanover Regional Medical Center, said testing is vital to be able to control the pandemic.

Ideally, he said, test results would come back quickly so you can identify infected patients and isolate them.

“That’s the only way that we really would be able to mitigate this pandemic and really reduce the number of people that are infected,” he said.

While the state announced an ongoing effort to increase access to testing statewide, Kamitsuka said turnaround times for tests are still around five to seven days. If that doesn’t improve, he said, it likely won’t make a difference.

“You can get tested, but you may not be able to get your test results back in a timely manner, which makes it, you know, practically useless,” he said.

In an interview, Cohen downplayed the importance of testing as just one tool in a larger strategy to combat the virus.

“Our bigger effort is way bigger than testing, right?,” Cohen said. “It is on prevention and really focusing on that. Testing is one piece. Tracing is another. Supported isolation is a fourth. So it is really a comprehensive look at all of that.”

Cohen said the state was initially held back from ramping up testing by a shortage of supplies — everything from the physical equipment needed to gather samples to the chemicals needed to process the tests.

Because of the nationwide supply shortage, she said, North Carolina received fewer supplies than other states considered hot spots.

“You have to factor in the timeframe there, that when the supply chain was limited, that supply chain got directed to hot spots,” Cohen said.

She said she did not know whether the federal policymakers who directed needed supplies to other locations were relying on particular quantitative data to make that decision or simply felt the state was a lower priority than places like New York or Illinois that saw early surges in cases. But the outcome, Cohen said, was less ability to test widely as the virus spread through the state in the spring.

Cohen could not account for the state’s low per-capita testing numbers beyond the supply chain argument.

Scott Shone, State Laboratory of Public Health director, pointed out that every state was dealing with the same supply chain problems.

“Every state that was experiencing cases was facing the same challenges and same allocations initially,” Shone said. “We had to restrict our criteria to those who were symptomatic.” 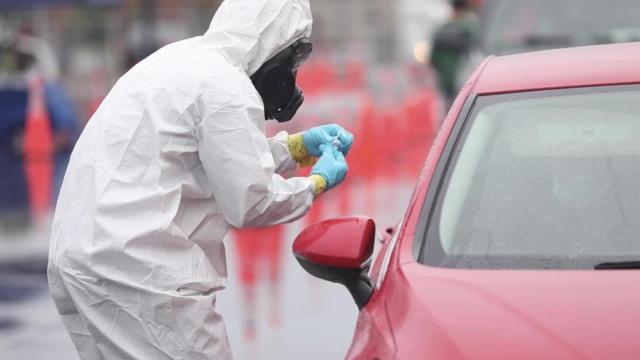 In mid-April, as the state began falling behind in its testing capacity compared to other states, Shone and his colleagues at DHHS convened a group of health experts and industry partners to coordinate ways to expand testing in the state.

The group’s first meeting on April 17 lasted an hour, minutes of the meeting show. The first meeting included the state health director and other DHHS officials, along with representatives from several private labs, medical groups and hospitals.

At the meeting, the minutes show, attendees got a welcome from Cohen and then laid out goals, objectives and a plan to meet them. They decided to meet weekly.

Minutes from that meeting show the group focused on how they could scale-up testing, with a “moonshot” goal of hitting 17,000 tests per day. At the time, the minutes show, the state was only averaging 2,500 tests per day.

To reach that goal, the minutes show, attendees decided they needed to establish more testing sites and help the state’s 100 counties — whose health departments are tasked with coordinating testing and contact tracing at the ground level — to have a unified approach to increasing access to testing.

The minutes also show that, up until late April, the state did not have a plan to coordinate the work of local health departments, which were often the front line of testing.

Months later, on June 23, DHHS circulated a draft testing plan that set a goal of testing 40,000 people a day.

Data that DHHS has posted on its COVID-19 dashboard shows the state is still well short of that goal, testing about 27,000 people a day on average over the last seven days.

Cohen said she is encouraged by the progress the state has shown in growing testing capacity but acknowledged new supply shortages — including chemicals used to process the test samples — that will likely further stem the ability to grow that capacity further.

“It’s a work in progress and we’re continuing to do that. But what we’re seeing again now is the rearing of the head of that supply chain issue,” she said.

“Even if we want to increase that surge of testing, we’re running into barriers.”

Cohen isn’t the only one who has noticed.

“We're sort of back to where we were before,” Kamitsuka said, noting that without increasing the capacity to process tests, additional swabs and samples can only do so much.

Still, he emphasized testing needs to remain top of mind.

“For those who have documented exposures, or have symptoms, we need to get more testing done so that we can isolate effectively,” he said, because he and others have seen a reluctance to isolate from those awaiting test results.

“If someone is in fact positive, but doesn't have confirmation yet, and they're around other people, it's going to spread and the current estimate as to how much it spreads, is on average, every person who is contagious will infect, between two and a half and three other people. And at that rate, you can see how quickly the numbers will rise.”

This story was jointly reported and edited by Kate Martin and Frank Taylor, of Carolina Public Press; Lucille Sherman and Jordan Schrader, of The News & Observer; Nick Ochsner, of WBTV; Emily Featherston, of WECT; and Tyler Dukes of WRAL.

EDITOR’S NOTE: This story has been updated to include additional context on the nationwide shortage of testing supplies.