Raleigh, N.C. — State officials on Tuesday rolled out a system to show North Carolina's coronavirus hotspots to ratchet up pressure on counties where the virus is spreading rapidly and in danger of overrunning health care resources.

North Carolina has repeatedly set new records in recent weeks in terms of new infections and hospitalizations. On Tuesday, another 3,288 infections were reported statewide, which is the second-highest one-day total in the pandemic. The surge in cases has pushed the rolling, seven-day average to 2,865 new cases per day over the last week, which topped a record set on Monday by more than 100.

Meanwhile, the 1,501 people in North Carolina hospitals with the virus on Tuesday also was a new high, and the 8.6 percent rate of positive coronavirus tests was the highest in at least a month.

The system, which will be updated monthly, uses a color-coded map showing counties with the highest rate of new cases, elevated rates of positive tests and limited hospital capacity in red, moderate levels in orange and lower levels in yellow.

A red county is one with more than 200 new infections per 100,000 residents within 14 days and either a positive test rate greater than 10 percent or a high impact on local hospitals. An orange county is one with 101 to 200 new cases per 100,00 residents in a two-week period and either a positive test rate of 8 to 10 percent or a moderate impact on local hospitals. 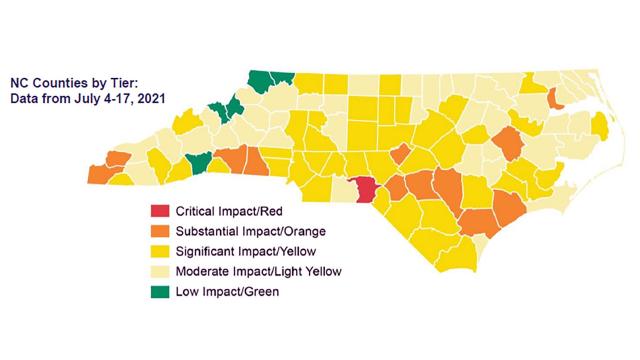 The initial map has 10 counties in the "critical" red zone, including Wilson, Hoke and Sampson. Another 43, including Cumberland, Johnston, Lee, Moore, Vance, Warren, Edgecombe, Halifax and Northampton, are considered orange, with "substantial" spread of the virus.

By pointing out hotspots, officials, businesses and residents in those counties can take extra steps to get on top of the virus, according to Cooper and Dr. Mandy Cohen, secretary of the state Department of Health and Human Services. Such steps include limiting personal actions to essential activities like grocery shopping, allowing more employees to work from home and enforcing the statewide mask mandate.

"Right now, North Carolina's numbers are increasing, not surging, but a surge can happen quickly," Cooper said. "We're hoping this open and transparent map, with all of the information, can raise the level of concern throughout each of these counties."

Both Cooper and Cohen noted efforts in Halifax County, where officials have taken a stronger stand on people wearing masks in public.

Halifax County Sheriff Wes Tripp said businesses are complying with the mask mandate and that his deputies have had to issue only about 10 warnings and no citations so far.

"If we received a call, we're responding and giving verbal warnings to business owners," Tripp said. "This depends on personal responsibility. We want to educate instead of punish."

State health officials are prepared to work with individual counties by ramping up testing and providing resources to help meet their individual needs, Cooper and Cohen said.

Meanwhile, Wilson County officials tweeted a statement from Health Director Teresa Ellen saying the new map "is in no way an indication that numbers have suddenly changed or that we are not exercising good strategies to control the spread. Citizens should continue to practice the 3 W's."

Wilson: Small gatherings, not churches or schools, to blame for COVID-19 spread

If metrics don't improve, the governor said, some county-specific restrictions might need to be enacted.

Raleigh restaurateur Greg Hatem said he doesn't want to see the state return to takeout or delivery service only for restaurants.

"If we shut down our dining room, we would have to furlough half of our staff, which is about half of what we’ve had before," Hatem said. "If we keep the numbers low, we can all stay open and keep people employed."

"North Carolina is on very shaky ground, and I am concerned as we head into the holidays," she said to open a virtual health forum sponsored by the Greater Raleigh Chamber of Commerce.

"I want to avoid what I see as the worst surge coming," she said, emphasizing that it's easy for coronavirus rates to soar out of control in just a few days.

Cohen also reminded people to be careful over the holidays by keeping gatherings small and outdoors and by wearing masks at all times.

"I know how hard this is," she said, expressing her own disappointment at not seeing family.

Cohen talked about a coronavirus vaccine, which could be ready by early January, calling it promising, but warning that it likely won't be widely available until the spring.

She said she is worried the vaccine will lead to risky behavior. Even after people start getting vaccinated, masks and social distancing should still be the norm for a while, she said.

"I am already worried that folks are completely over this virus," Cohen said, urging people to be vigilant and practice the "three Ws" of frequent hand washing, wearing masks in public and waiting at least 6 feet apart from others.

Nationwide, 47 states are seeing a rise in virus cases, with some reimposing stay-at-home orders or closing restaurant dining rooms. Cooper said those states should serve as "the canary in the coal mine" to North Carolina, and he warned against pandemic fatigue.

"We cannot let weariness win," he said. "Letting the virus win now with vaccines coming so soon is like punting on the 10-yard line. That's foolish. We need to reach this goal line together."

Dr. Mark McClellan, director of Duke University's Margolis Center for Health Policy and a former commissioner of the U.S. Food and Drug Administration, agreed that North Carolina's trends are worrisome but not yet alarming.

"North Carolina, while our trends overall are concerning in terms of rising cases, it is not as bad as many parts of the country where we are seeing cases skyrocketing out of control," McClellan said.

Last week, with the impact of the holidays in mind, Cooper reduced the number of people allowed to gather indoors from 25 to 10 until at least the first week in December.

Doctors say coronavirus is being spread in small, intimate gatherings, when people may not think to wear masks while gathering with extended family or friends. This Thanksgiving, doctors are asking families to consider gathering with their single household for dinner, using Zoom to connect with extended relatives instead.