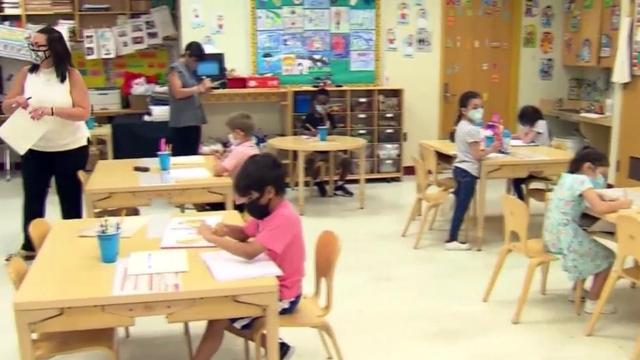 Raleigh, N.C. — Researchers in North Carolina will study a replacement for quarantine in schools that would include coronavirus testing and allow students or school staff stay in school.

The ABC Science Collaborative, with permission from the North Carolina Department of Health and Human Services, will study this method in nine school districts that require people to wear masks indoors. However, it will look into the “test and stay” method in cases of unmasked exposure in districts with mask mandates.

The nine districts in the study will have varying populations and be located in different parts of the state.

Some North Carolina school boards, such as Harnett County's, have shortened required quarantine times or tried to abandon them altogether, as in the case of Union County.

The department’s approval of the study on loosening quarantine restrictions is happening as officials continue to assert mask mandates as the best way to prevent the spread of the virus in schools, where many students aren’t eligible for a vaccine yet.

Already, DHHS officials, in a presentation Thursday to the North Carolina State Board of Education, are correlating the presence of mask mandates with lower rates of virus clusters in the state, though few of North Carolina’s school districts don’t have a mandate.

Just five of 115 state-funded public school districts make masks optional, per DHHS’ count, with another four only partially requiring them.

That represents about 89,000 students, or less than 7% of the 1.3 million children enrolled in public school.

Board member Amy White asked State Health Director Dr. Betsey Tilson whether she had the raw numbers to compare districts and whether she knew if hospitalization and death rates were also higher among children in districts without mask mandates.

Tilson said she did not have the raw data with her, and she cautioned against making comparisons on hospitalizations and death rates between mask-optional and mask-required districts because the raw numbers among children are so low that the rates could be skewed.

“The death rate from COVID for children is, thankfully, low,” Tilson said. She added that children are just one population group to consider.

“It’s all a connected ecosystem, and we have to remember that kids are just a part of that ecosystem,” she said.

White said she also wanted to consider quarantine practices, given that many infections are asymptomatic. More data, she said, “might help our decision makers make better decisions.”

DHHS found, in a look at data so far, that 17.2 virus clusters occurred per 100 schools in the three North Carolina counties where school districts have consistently made masks optional since the fall calendar began.

In the 89 counties with school districts that have consistently required masks, 35 reported no clusters. In the 54 that had clusters, DHHS reported that they averaged out to 6.9 clusters per 100 schools.

It’s unclear what the local spread rate in those counties or local mask policies in those counties have been since the fall term began. Virus spread has increased statewide since late summer, with a downturn in recent weeks. All 100 North Carolina counties remain well above the threshold for what the U.S. Centers for Disease Control and Prevention classifies as “high transmission.”

What schools are required to do

Also on Thursday, attorney for the board Allison Schafer explained what long-existing law requires schools to do as far as contact tracing, informing local health authorities of positive cases and instituting control measures against communicable diseases.

Schafer said COVID-19, as a communicable disease, falls under state laws that existed well before the pandemic.

Some of those requirements are:

Kisha Clemons, 2020 state Principal of the Year and a non-voting board member, asked Schafer if the rules meant that school officials would be expected to gather records during non-working hours.

North Carolina schools have often outsourced the bulk of their contact tracing to local health departments because of a lack of school staff with the time to do it.

Schafer said Clemons, as the principal, would have to call the local health department to inform them of the positive case. The department would work out a plan for what to do next, Schafer said.