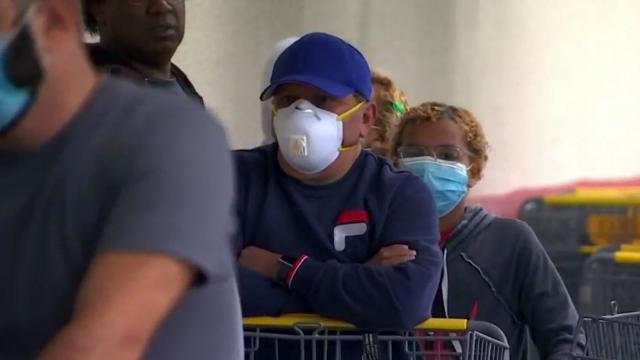 North Carolina's anti-mask law was already suspended once, when the legislature gathered in April. But that deferral ran only through the end of July, and the Senate balked last month at extending it.

The Senate's Republican majority got on board with the idea Wednesday, joining the House in voting Senate Bill 232 through. It passed the Senate 43-4, with a handful of Republicans voting against.

Update: Gov. Roy Cooper's office announced Friday that he had signed the bill.

Sen. Rick Gunn, R-Alamance, said from the Senate floor that it will still be illegal to wear a mask to conceal your identity. It's allowed, though, to wear one for health reasons.

People will still need to remove their masks if asked by law enforcement, the bill states.

The measure once included language that that said stores and other businesses need only post a sign saying masks are required to satisfy Gov. Roy Cooper's statewide mask order, which leaves businesses responsible for enforcing at least some of the mandate.

That language was dropped earlier this week in the House, and retailers hope to work with the Cooper administration on something similar that won't require the General Assembly to tinker with state law.

The bill still contains language meant to address concerns with the way a previous measure – Senate Bill 168 – would have shielded death investigation records from public view. Cooper vetoed that bill on Monday, mooting the issue. But Senate Bill 232 retains language that strips out the death records language, should the legislature override the governor's veto to pass the rest of what's in Senate Bill 168.

It's unclear whether that will happen, but the legislature adjourned Wednesday afternoon and doesn't plan to return for regular business until Sept. 2.

A number of health policies, and some $25 million in federal grant funding, that the Cooper administration requested are also locked up in Senate Bill 168.

The grant funding could have been approved separately through yet another bill this week, Senate Bill 380. That passed the House on Tuesday 102-0, but Senate leaders declined to take the measure up.