Raleigh, N.C. — Here are the latest updates on the impact of the coronavirus outbreak in North Carolina and across the globe:

What you need to know:

Coronavirus in NC: Maps and graphs

10:00 p.m.: According to data from Johns Hopkins University, the U.S. has now surpassed 40,000 deaths due to the coronavirus pandemic.

6:30 p.m.: President Trump announced at Sunday's task force briefing that negotiations are progressing on another relief package that would be focused around aid to hospitals and small businesses. The President indicated that further information on a potential agreement could come on Monday.

5:05 p.m.: According to CNN, the One World: Together At Home concert broadcast raised over $127 million for the World Health Organization's emergency response fund.

2:45 p.m.: Sixty-four soon-to-be graduates of Wake Tech’s Martha Mann Smith School of Nursing will get to participate in a special curbside pinning ceremony on Monday. At the drive-by pinning ceremony, students will remain in their vehicles to observe social distancing rules. The graduates will be ready to enter the workforce as early as May 8.

2:30 p.m.: South Carolina Gov. Henry McMaster is planning to reopen all retail stores and public beach access points on Tuesday -- that's more than a week earlier than the stay-at-home order in North Carolina expires. While some local groups like ReopenNC are petitioning for a complete reopening by the end of April, health officials say the stay-in order needs to continue if we want to slow the spread of coronavirus.

2:15 p.m.: A group of clowns called the "Sudan Dunn Clowns" surprised the residents at a Dunn nursing home this morning. The clowns played oldies music and danced in front of the windows to bring smiles to the residents' faces. 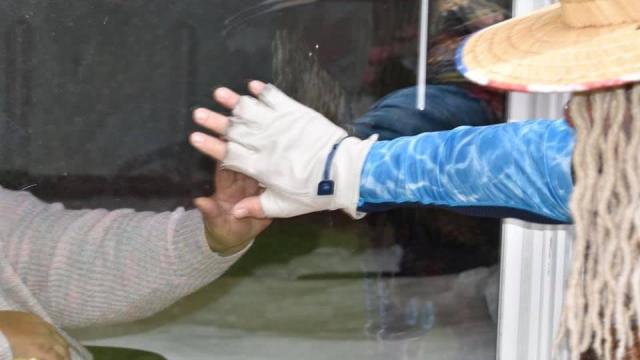 2:00 p.m.: Tennessee is making sure everyone gets tested for the coronavirus -- even if they don't show any symptoms. At least two drive-thru testing centers were open yesterday. All tests were free and done within the safety of a car. Lines were long, and organizers say they moved about 100 cars an hour at one testing site.

1:30 p.m.: Music superstars got together Saturday night to host a "One World Concert." Lady Gaga owned the show with the song "Smile," and other guests included the Rolling Stones, Paul McCartney, Elton John and many more. The musicians appeared alongside world leaders and journalists to thank health care workers and raise money to help those affected by COVID-19.

COVID-19 is arguably the leading cause of death in the U.S. right now. The virus has killed more than 1,800 Americans almost every day since April 7, and the official toll may be an undercount. By comparison, heart disease typically kills 1,774 Americans a day, and cancer kills 1,641.

Coronavirus in NC: Maps and graphs

1:00 p.m.: ReopenNC, a Facebook group with over 50,000 members, will hold rallies in Raleigh on Tuesday and each week until the stay-at-home order is lifted. ReopenNC's goal, according to organizer Ashley Smith, is to do away with stay-at-home orders and re-open the economy in full at the end of April.

Gov. Roy Cooper has said the state likely will relax some restrictions in the coming weeks, but he's made it clear others will remain. He has promised careful consideration and to roll out more details soon.

12:30 p.m.: Jonathan Barbee, lead pastor at Bethesda Baptist Church in Durham said dozens showed up to his second ever "drive-in" church service on Sunday morning. Barbee said, while the service was a success, it was emotional.

"I definitely see a lot of tears," Barbee said. "Just simply seeing each other through a car window was very moving to them."

12:00 p.m.: At least 211 more coronavirus cases have been confirmed in North Carolina since Saturday night. The biggest spike is in Wayne County, where there are now at 463 cases, or an increase in 85 cases, or 22%, overnight. Wake County has 592 confirmed cases.

Three new deaths were reported in Sunday. One is in Durham, bringing its total to five. Wake County remains at four deaths, and Mecklenburg County has the highest number of deaths in the state at 24.

There are now more than 1,000 positive cases in long-term care facilities in NC and nearly 60 deaths, according to the latest numbers.

11:30 a.m.: April 19-25 is National Library Week, and while public libraries are closed, they're still celebrating. People can virtually visit the Cumberland County Public Library by using the hashtag #NationalLibraryWeek on social media. The public can discover eBooks, movies, video games and much more—all from home.

11:10 a.m.: While the Metropolitan Opera has canceled all of its upcoming performances because of coronavirus concerns, the Met will stream encore presentations every night from the Live in HD series on the company website. According to their website, the opera streams will begin at 7:30 p.m. each night and will be available to view at metopera.org for 20 hours after each performance.

10:50 a.m.: A birthday present -- a new bike -- was delivered to a 10-year-old leukemia patient through his window at Duke University Hospital last week. Due to coronavirus, Reese's parents couldn't visit him in person, so Duke staff worked with the family to arrange a special surprise.

10:30 a.m.: Taylor Swift is canceling all of her remaining shows and live appearances for the year after speaking with health officials. Swift went on to say that the safety and well-being of fans should always be the top priority. U.S. and Brazil shows will be rescheduled for 2021.

10:15 a.m.: The Center for Volunteer Caregiving nonprofit has shifted its focus to providing phone calls and grocery shopping services to the 450 people it serves.

This month, the center launched Operation Senior Smiles and hopes to collect thousands of cards and notes of encouragement to send to the people it supports and others across the region.

10:00 a.m.: Athletes aren't taking any days off even though the 2020 Olympic Summer Games have been postponed. Many are finding creative ways to stay conditioned and ready for next year.

Gold medalist Laurie Hernandez has been practicing her gymnastics routines at home and keeping up with workouts the best she can.

9:45 a.m.: Walmart will require all workers to wear face coverings starting Monday as the coronavirus pandemic ravages communities nationwide. The CEOs of Walmart and its Sam's Club wholesale stores made the announcement in a statement Friday.

Customers will also be encouraged to cover their faces, although it will not be mandatory. Walmart will provide all employees with a face covering, or they can bring their own.

To permit racing at Charlotte Motor Speedway without fans, Gov. Cooper would have to make a change to his executive orders.

9 a.m.: Reopen NC, a Facebook group with more than 50,000 followers that feels the government's reaction to the coronavirus has been overly restrictive, has planned weekly protests in North Carolina until businesses will reopen.

In a statement sent to WRAL News, the group's lawyer said, "My clients are planning to reconvene their protest of the quarantine orders this Tuesday, April 21, 2020, and every Tuesday thereafter, until such time as they conclude that their concerns have been addressed."

On April 14, dozens of people, many wearing red, white and blue and waving American flags, gathered outside the Legislative Building in downtown Raleigh to protest the statewide stay-at-home order in effect until April 30 and possibly longer.

Raleigh police had to break up the crowd, which was not practicing social distancing. Most got in their vehicles and continued the protest by blowing their horns, but one woman who failed to leave was taken away in handcuffs.

8:45 a.m.: A new NBC-Wall Street Journal Poll shows 6 in 10 Americans support keeping stay-at-home restrictions to fight the pandemic. Although strong majorities of Democrats and independents are more worried about the coronavirus than the economy, Republicans are divided. Nearly half of them more concerned about how the restrictions could affect the economy.

The poll shows President Trump's job rating remains unchanged, hovering in the mid-40s. A majority continues to disapprove of the president’s handling of the coronavirus, and Trump is still trailing apparent Democratic nominee Joe Biden in the race for the White House.

8:30 a.m.: Instacart is expanding deliveries from Costco pharmacies to almost 200 locations in seven states. Costco will send customers a text when their prescription is ready with a link to schedule a delivery. People can also add household goods and groceries to their order and request contact-less delivery.

8:15 a.m.: Health officials say the CDC broke its own production rules when creating coronavirus tests. An FDA spokesperson said the tests were made in a lab, not a manufacturing site. That led to contamination, which put testing weeks behind schedule. The Department of Health and Human Services is now investigating.

7:45 a.m.: North Carolina businesses like Raeford and Mountaire Farms are hosting pop-up sales so customers can buy chicken in bulk. At least seven sales were underway on Saturday. Organizers from a Wendell sale said they sold about 1,200 cases of chicken in just two hours.

Customers line up early for bulk chicken sale in Wendell

7:30 a.m.: Coronavirus is spreading quickly in state and federal prisons. By Friday -- the Neuse Correctional Center in Goldsboro confirmed 281 cases. At the federal prison in Butner, at least five inmates have died from the disease.

7:15 a.m.: The Wake County Magistrates Office will start performing marriage ceremonies again Monday morning. All ceremonies will happen at the office on Hammond Road. Appointments are not necessary, but officials ask that couples limit the number of people who join them.

7:00 a.m.: Starting Monday, people in Durham County will be required to wear facial coverings in public. People will have to wear a clean mask or face covering anytime they are in contact with others who are not members of their household (both private and public spaces). The covering should be some sort of cloth material and cover both the nose and mouth.

6:45 a.m.: Huge crowds are filling the beaches of Jacksonville, Florida this weekend. Beaches and parks reopened on Friday with restricted hours and social distancing rules, but, despite restrictions, people were not 6 feet apart. Florida officials say people are only allowed to use the beach for exercising, walking and running, fishing and swimming but no sunbathing.

6:30 a.m.: Some churches are testing out different ways of bringing their congregations together while keeping their distance. Bethesda Baptist in Durham is one of several hosting drive-in services on Sunday. People can pull up, park and dial their radios to 90.9 FM to listen to the service.

6:15 a.m.: Two COVID-19 deaths in Cumberland County have been reported at a nursing facility.

Six new cases were reported at Village Green Health and Rehabilitation Center in Cumberland County on Saturday. Since the outbreak began, 13 people at the facility have been diagnosed with COVID-19 -- 10 residents, two staff members, and one contract employee. The two deaths were both residents.

Eight people have died at Franklin County senior living center, which reported the most deaths in our area of any senior community.

6:00 a.m.: Across the state, coronavirus cases have climbed to more than 6,300, including 219 added since yesterday. At least 90 people have died from COVID-19 in North Carolina,. Currently, the state is averaging about 10 deaths each day.

Since March 16, there have been 636,894 new unemployment claims in our state. That number is just a little less than the combined population of Raleigh and Cary.