NC backlog falling, but pitfalls remain for those on unemployment 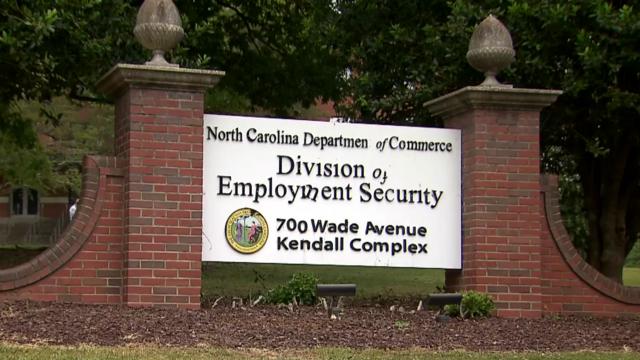 Raleigh, N.C. — The state's unemployment system has made progress whittling down its backlog of claims, but pitfalls remain for people trying to navigate a complicated web of programs.

Since pandemic-related orders closed businesses in March, the state Division of Employment Security has provided $7.5 billion – from six different state and federal programs – to more than 1.2 million people.

The division said Friday that it had cleared all state claims filed through June 16 and all claims tied to federal programs through June 10. Some 7,000 claims remain pending, all filed between mid June and early August.

None of that means much for Daniel Robinson.

Robinson rigged stage lights for concerts, a job that doesn't really exist right now. He filed for unemployment in March, and though much of his income comes as a independent contractor, he had enough regular income to qualify for traditional state unemployment benefits.

He would have done better not to. A federal program called Pandemic Unemployment Assistance started in April, focused on independent contractors and business owners who don't qualify for regular unemployment. But one of the eligibility requirements, under federal law, is that you have to have been denied regular unemployment first.

Because he qualified for the state program, less of Robinson's income was used to determine his weekly benefits.

For a while, he got an extra $600 from the federal government, part of an expansion program that ran out in late July. Now, he says he gets $79 a week. He doesn't even get an extra $300 federal boost because a temporary program, announced last month by President Donald Trump, has its own income threshold, and Robinson's check isn't big enough to qualify.

'Time is running out.' People still desperate for unemployment benefits as NC plows through backlog

“It’s not even Christian, man," Robinson said this week. "I can’t get dental care that I need. It’s getting serious.”

In the last few months, Robinson said he's been "misinformed and led down rabbit hole after rabbit hole" by call takers at the state unemployment office.

It's a common story. The Division of Employment Security was overwhelmed this spring with close to as many claims in a week as it handled in all of 2019. The state contracted for new call takers, many of whom didn't have a strong grasp of state and federal rules and couldn't answer detailed questions.

Robinson said he's still going back and forth with DES agents, but he may be stuck. The division can't discuss individual situations due to privacy rules, spokeswoman Kerry McComber said, but if someone qualified for regular unemployment insurance, they don't qualify for Pandemic Unemployment Assistance, even if it would help them more.

"I work hard," he said. "I paid all my taxes. ... and it' not being taken into consideration for my unemployment? That's just wrong."

Sen. Jim Perry, R-Lenoir, said gaps like this are "the thing about government that everybody hates." He said he tried to help someone with autism this summer who filed for disability, only to learn that disqualifies you from getting unemployment.

"It's those kind of scenarios," Perry said. "The law wasn't intended to put somebody like that in harm's way, but you can't think of everything when you're writing that stuff."

'You got to wait'

She said she's diabetic, out of insulin and living with her parents in West Virginia after her landlord kicked her out in Fayetteville. Last week, she was worried about the electricity getting cut off at her parent's place.

Replinger said she used to drive for a delivery service, and she was getting unemployment benefits under the federal Pandemic Unemployment Assistance program, but the money stopped flowing in late August.

"Because of 'identity theft,'" she said, "and getting them to say that was an act of Congress.”

McComber said she'd look into Replinger's situation. A number of people have seen movement in their cases after contacting the media. That includes Rich Hooten, who owns a personal training center in Greenville and went weeks without getting the benefits he was owed.

That changed after Lt. Gov. Dan Forest's office tweeted about Hooten's case and WITN in Greenville ran a story about it. Hooten told WRAL News that his benefits started flowing last week. It turned out DES had his claim mixed up with someone else's, he said.

"I don't have any ill will towards anybody," he said. "Who could expect all this?"

Almost from the beginning, lawmakers, Forest and other elected officials fielded complaints about the system.

They became so routine that General Assembly members built online survey forms to take in complaints, and they would forward those at the end of each day to contacts at DES.

"The calls have dropped off except for those, like you mentioned, extreme cases that are still out there," Perry said. "But it's going to continue to be heartbreaking for folks to go through that stuff."

Forest said on the KC O'Dea radio show last week that his ability to help got "shut down" at some point.

Assistant Secretary for Employment Security Pryor Gibson said that's not the case and that DES has taken more than 7,000 referrals from Forest's office. McComber said Forest's office did such a "consistently good job" at providing DES with the information it needed on claimants that DES staff talked about the Lieutenant Governor's Office as a model when it drafted a memo walking other elected officials through the process.

"Any kind of suggestion that something has changed to restrict anybody's office ... that's completely untrue," Gibson said Monday. "I'm sure it's just a miscommunication."

Other elected Republicans seeking help for their constituents, including Perry and Rep. Julia Howard, R-Davie, said they haven't seen a change in DES' response to them. Rep. Jason Saine, R-Lincoln, said he heard Forest's comments, though, "and I wasn't shocked."

A staffer for General Assembly leadership, who compiles a list each day to send to DES, said Friday that division staff are always willing to help and take questions, and that hasn't changed. The staffer said the number of cases coming to the legislature has decreased dramatically, but the complexity of those cases has increased.

Lauren Horsch, spokeswoman for Senate President Pro Tem Phil Berger, said in a statement that staff for the chamber's Republican leadership is "in regular contact with DES" and has helped more than 4,000 people across the state.

At first, they were forwarded to the division's legislative liaison. Then, at DES' request, they went to another division staffer, Falkenbury said in an email. As response times increased, the Lieutenant Governor's Office "realized that we had come across a few hard workers at DES that we knew we could rely on, and we began distributing our emails to them directly," Falkenbury said in an email.

"Over the summer, at a Council of State meeting, the Lt. Governor mentioned how our small office was assisting thousands of North Carolinians with their unemployment claims," Falkenbury said in his email. "Shortly thereafter, our office was contacted by DES and told to no longer email any of those DES employees that have been so helpful and to only email the one employee mentioned before."

Falkenbury provided an email exchange, dated Aug. 27, where someone at DES replies to an email from the Lieutenant Governor's Office with, "In the future, only send correspondence to me."

That's where things stand now, Falkenbury said, and DES' response time "has lengthened to the extent that it has become detrimental to our constituents."

Gibson said that, after he came to the division in late May, he changed the process for elected officials so their referrals would all go through one portal "and then get sent out really quickly, depending on what the issue was."

"That actually sped up the process, substantially," Gibson said. "It didn't impede it.

"We didn't do anything to restrict anybody," he said. "If anything, we've opened the gates even further."

Said Falkenbury: "The pipeline that was working was shut off, our communication between DES and our constituents, as well as our office staff, has slowed to a trickle."