Artists are challenged to use light as a way to express hope in the midst of hardship. Each original work serves as a type of lantern. Last year, the experience of Hurricane Florence on the Carolina coast inspired different works in the exhibit.

"The challenge is to give artists an opportunity to express their thoughts about remembrance, hope and light," said artist Debbie Bluestein of Hampstead, N.C. 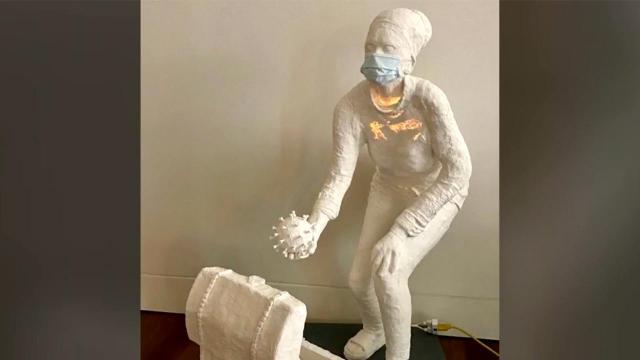 Bluestein and Raleigh’s Jeanie Redick worked together on their project for the 2020 exhibit. The two artists discussed how to express their sentiments about the current pandemic and how it has literally changed the world.

The motivation was clear to Bluestein. She said, "I just wanted all of the evil to go away. That was my little inside statement." In sharing the idea with her collaborator, Redick responded, "That’s Pandora’s Box!"

In the original story of Pandora’s Box, the young girl lets all kinds of evil out of the box which had been sealed shut. Bluestein and Redick’s project is called "Pandora Revisited."

Bluestein remembers hearing a mother explain the piece to her child. "She said, "That’s Pandora’s Box where all the bad things go.’"

Tabitha Radaker, a student at the University of North Carolina at Wilmington, served as the model for the artists’ hollow plaster figure. Seven-inch gauze strips dipped in plaster were formed and dried around her body.

Radaker was positioned as a stranding figure, stooping forward. She has a surgical-type mask on her face. The girl is bent forward in order to place a single coronavirus particle into the box.

From an opening above her chest, glows a light.

It symbolizes, Redick said, "That strength, that love and compassion for one another, standing up for what’s right. It’s remembering who we were as a people, of us as a community, as a collective, as human beings."

"Pandora Revisited" won "Best of Show" at the Cameron Art Museum exhibit which ran from mid-November 2020 and closed on Sunday.

Bluestein and Redick credit the work of famous artist George Segal as their inspiration. Segal invented the concept of hollow white plaster human figures to express the impact of the Great Depression and World War II.