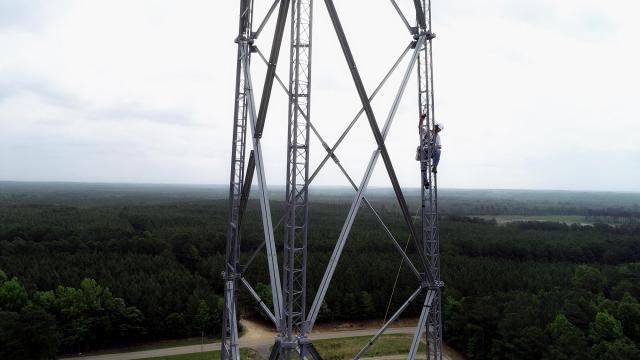 In the past few months, life as we know it has become virtual.

Teachers conduct lectures over Zoom, employees rely on Slack to stay connected with coworkers, and doctor's visits happen over a webcam in the living room. With so many facets of life dependent on the internet, broadband access has become a necessity for almost everyone.

In rural counties across the state, however, there's still a significant lack of access to connectivity — and as the school season picks back up for a largely remote semester, this digital divide may lead to an educational divide, as well.

In Nash County, local leaders and policymakers are hoping to bridge that gap. After approaching CloudWyze, a Wilmington-based technology provider, the county struck a partnership that will eventually bring broadband access to rural pockets of the area.

"Our goal is to build a network that will encompass all corners of the county, then at that point we make sure that we're working towards that build out in a phased approach. We started with a pilot program, putting a tower in one corner of the county, and that went really well so now we're in phase two, which is three additional towers," said Shaun Olsen, president and CEO of CloudWyze. "We've spoken with many counties, and the tune has definitely changed these last number of months due to COVID, but Nash County has been on this well before COVID happened. I think what's changed in the last number of months is that now, it can't come fast enough."

Olsen is right — COVID-19 has made internet access an immediate need for many in the community, especially since the Nash County School District is operating remotely for the time being. The district is, luckily, a one-to-one district, meaning most students were able to take home a device, even if their home wouldn't normally have one.

Unfortunately, even with a device, not all students have access to reliable internet connection.

"I would say about 70 percent of the students were online and actively engaged, as much as we could tell. For that other 30 percent, we would do packets, then this semester we started to preload some of the USBs with video content from teachers — so students could load lessons into their Chromebook and play them without WiFi," said Steve Ellis, superintendent of the Nash County School district. "We've done our best to get around the issue, but it's a tough place to be as an educator."

While broadband access is a pressing concern for many students, the school district has been coming up with creative ways to lessen the divide until broadband expansion goes live. In addition to packets and prerecorded lessons, the district has also partnered with local businesses to create makeshift internet cafes, and the schools are opening up their parking lots and possibly multipurpose rooms to serve as central locations for students who need Internet access.

Although Ellis is concerned about the education gap this might cause, he's hopeful the issue has caused conversations to start and doors to open — and Olsen agrees.

"I don't think anything's changed in terms of the digital divide — it's on the front page of the paper. It's always been an issue, but the good thing that's coming out of this is that the industry itself is getting the attention that it needs in order to close this gap," said Olsen. "I like to see leadership getting more involved, and that's one of the things that was intriguing to us about Nash County. I remember they told us, ‘We brought power to our people. We brought water to our people, and we're not allowed to bring internet, but we're going to figure out a way to do it.'"

Currently, CloudWyze is working with the county in a phased approach, adding additional towers and fiber access throughout each phase until broadband access has been extended throughout the area at-large. According to Olsen, the company took small steps at first to make sure the technology worked, adding around 60 people to the network through the pilot project and first few phases.

Now, they have a backlog of around 1,000 people eager to receive access. With such a demand to fulfill, CloudWyze has been able to tap into the Nash County workforce for extra help, hiring from the community for a variety of positions.

While the partnership between Nash County and CloudWyze may not have been the most obvious, Olsen has been impressed with how smoothly things have gone.

"We weren't particularly interested in operating in rural areas at first, but we like to solve problems. Some new technologies came online, and the people at Nash County were interested in trying them out, we were interested in giving it a shot, so we kind of married those two together," said Olsen. "It is a long term commitment on both sides, but they've been extremely good at saying, ‘How can we help make this go faster? How can we help get you access to what you need?' They did a great job of positioning us for success, and that's the way counties should approach solving this problem."