Raleigh, N.C. — Unlike recent weeks, people didn't march through downtown Raleigh on Tuesday in an effort to push state leaders to immediately lift restrictions that have shuttered thousands of North Carolina businesses during the coronavirus pandemic.

Tuesday's rally was much smaller than in recent weeks, with fewer than 200 people. The crowd also stayed in a parking lot on Jones Street across from the State Archives building instead of marching around the State Capitol, the Legislative Building and the governor's mansion.

The rally also was less confrontational than a week ago, when four people, including ReOpenNC co-founder Ashley Smith, were arrested and a gate to the governor's mansion was damaged.

A documentary filmmaker was arrested on trespassing charges Tuesday. Police said he was blocking the flow of traffic and he refused to leave the state-owned parking lot.

Many ReOpenNC protestors say the stay-at-home order violates their constitutional rights, while others simply say the restrictions are hurting businesses.

"Week after week, Gov. Cooper continues to show just how out of touch and callous he really is," Smith said Tuesday.

"We need to go back to normal life," protester Shereen Shammas said. "Let the people live like they used to."

"Every business is essential. We need everyone working," agreed protester Jessica Smith. "I have a lot of friends who have small businesses – piano teacher, hair stylist, people who lay carpet – and they’ve lost their jobs, and they’re struggling. We want to protect our elderly and our immune compromised, but we also want to protect people who are living paycheck to paycheck." 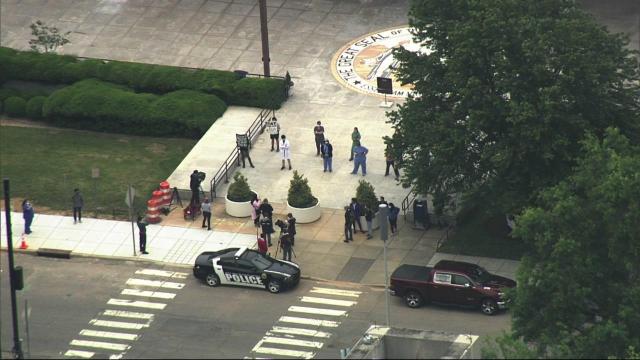 "Look at the rate of the death just in the two short months that they have identified [the virus] here in the United States," said Lisa Matthews, a nurse at Wake Forest Baptist Hospital in Winston-Salem.

"There's a huge difference between wishful thinking and reality ... and we have to face our reality," said Luis Mejia Cruz, a pathogen researcher. "The reality is we have to save lives. Reopening recklessly, no matter how much we want it, will cost us a lot of lives and overwhelm our health system."

Cooper laid out plans Tuesday evening to allow many businesses to reopen this weekend as part of a three-phase plan that would gradually lift restrictions.

"What we are going to see as a result of this phased rollout is that North Carolinians are gong to be traveling the Southeast in droves to go take their money to other places," Smith said.

ReOpenNC organizers announced at the end of their rally that the group is working on becoming a 501(c)(3) nonprofit, which would allow them to create a defense fund to file a lawsuit against the state over keeping the stay-at-home order in place.

The shift will “perpetuate this fight even further," Smith said.

ReOpenNC is also assessing its strategy of weekly rallies and plans to provide details Wednesday on its future actions, according to a spokesman.