As doctors worry about 'a very apocalyptic fall,' the CDC retracts info on how Covid-19 spreads 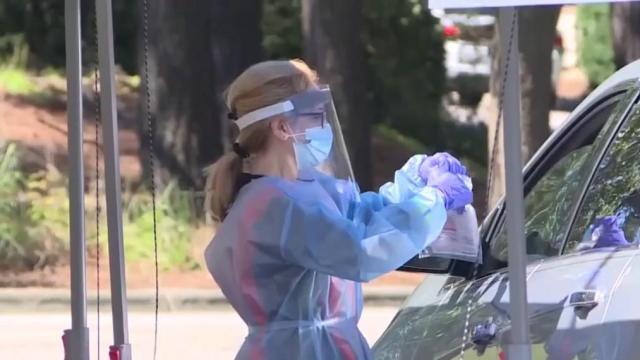 CNN — As most US states head in the wrong direction with coronavirus, the Centers for Disease Control and Prevention has retracted key information about how the virus spreads.

The US is on the brink of 200,000 coronavirus deaths, with the number of new cases rising in 28 states, according to data from Johns Hopkins University.

"We may be in for a very apocalyptic fall, I'm sorry to say," said Dr. Peter Hotez, dean of the National School of Tropical Medicine at Baylor College of Medicine.

"And it's happening because we're forcing schools to reopen in areas of high transmission. We're forcing colleges to reopen, and we don't have the leadership nationally, telling people to wear masks and to social distance and do all the things we need to do."

Dr. Jeanne Marrazzo, director of the infectious diseases at the University of Alabama at Birmingham, said she agrees this fall "could be apocalyptic" after recent spikes.

"Why are we going back up? I think there are a few reasons," Marrazzo said,

"One is that there is general fatigue. People are really tired of this," she said. "And then the second thing is ... the completely contradictory messages that we're getting -- not just the misinformation, but also the confusion about how things are spread."

She cited a recent update from the CDC that said you can get Covid-19 just by inhaling tiny particles from an infected person's breath that linger or travel in the air.

"There is growing evidence that droplets and airborne particles can remain suspended in the air and be breathed in by others, and travel distances beyond 6 feet," the CDC's website said in an update Friday. "In general, indoor environments without good ventilation increase this risk."

Many doctors have known that for months -- hence their pleas for the public to wear masks.

"The updated guidance would have been fine if it came out last May," Hotez said. "We knew all of these things months ago."

But by Monday afternoon, the CDC's update was removed.

"The fact that they retracted this, even though this is common scientific knowledge at this point, one has to wonder what's behind it," said Dr. Leana Wen, a CNN medical analyst and an emergency physician at George Washington University.

"Was there political pressure? Political interference that's driving this rather than science?"

Both the heads of the CDC and the Food and Drug Administration were appointed by President Donald Trump. And while Trump said he gives himself an "A+" on his handling of the pandemic, he has also said he "wanted to always play it down."

When asked why the CDC retracted its update on aerosolized spread, a spokesman said it was posted in error.

"A draft version of proposed changes to these recommendations was posted in error to the agency's official website," CDC spokesman Jason McDonald said in an email to CNN.

"CDC is currently updating its recommendations regarding airborne transmission of SARS-CoV-2 (the virus that causes COVID-19). Once this process has been completed, the update language will be posted."

The heads of the CDC and the FDA are appointed by the president. Why that might be a problem

Where Covid-19 cases are rising and falling

As of Monday, 28 states had more new cases this past week compared to the previous week, according to Johns Hopkins data.

But it's not just the raw numbers of new cases that the public should pay attention to. It's also the test positivity rates -- the percentage of tests taken that turn out to be positive.

The World Health Organization (WHO) has advised governments maintain test positivity rates at or below 5% for at least two weeks before businesses reopen.

As of Monday morning, 27 states and Puerto Rico have test positivity rates higher than that 5% threshold, according Johns Hopkins University.

On the other end of the spectrum, five states have test positivity rates lower than 1% -- Maine, Vermont, Massachusetts, New Hampshire and New York.

How some states got creative in controlling Covid-19

The race for a (safe and effective) vaccine

CDC Director Dr. Robert Redfield has said a vaccine might not be available to most Americans until mid-2021.

But Moncef Slaoui, chief adviser to Operation Warp Speed, told CNBC Monday that "we are pretty close" to having a vaccine for Covid-19.

At least three vaccines are in Phase 3 clinical trials in the US. Slaoui said it's possible vaccine efficacy could be determined between October and January.

"The longer we wait, the more likely," Slaoui said.

If approval or authorization is granted by November or December, "we may be able, for instance, to immunize the most susceptible populations in the US by December of 2020," Slaoui said.

"Most of the elderly population and first line workers in January of 2021, and the rest of the US population progressively in the month of February, March and April," Slaoui said.