Youngsville, N.C. — The Youngsville Christmas parade proceeded Saturday morning, despite a raging pandemic, state rules against it and the pleas of health officials to cancel the event.

Mayor Fonzie Flowers insisted Friday that the event would be safe.

“I was elected for a reason – to represent my citizens – and that’s what we are trying to do," Flowers said. "We’re going to do it. We’re going to keep them safe.”

Families lined the 2-mile route, and children scrambled for the candy thrown from floats. Up to 300 people were expected to attend the 10 a.m. parade, with another 80 to 100 participating in the event. 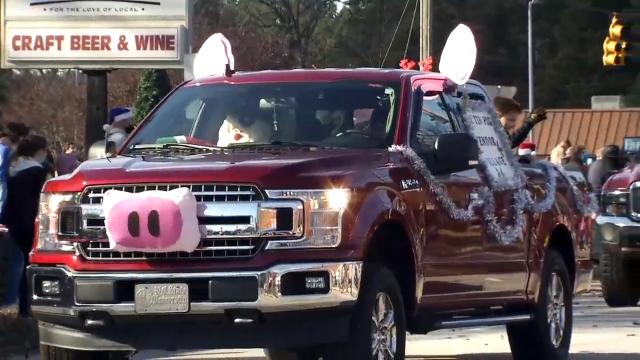 An executive order issued by Gov. Roy Cooper limits outdoor gatherings to 50 people to curb the spread of coronavirus, but Youngsville officials argue the parade falls under an exemption that applies to religious events and gatherings.

Youngsville also appeared to violate the mass gathering restrictions during the town's tree-lighting ceremony on Friday night, which drew an estimated 100 people.

“I think we are playing by the rules," Flowers said, noting that the parade covers a 2-mile stretch, giving people plenty of room to be physically distant from others.

Flowers said masks would be required at the parade, but both spectators and some of those marching were visible without them.

One event attendee, Robert Barhan, said he chose not to wear a mask at the parade.

"We've been social distancing here and in the truck. We do wear masks when we go out places," he explained.

“We are not forcing anyone to do anything," Flowers said. "It’s been such a difficult year, and trying to give people some hope, some sense of pride, knowing we can do this in the allotted space we have and to keep people safe, I absolutely think we can do that."

“Words like safe cannot be credibly applied to any mass gathering event during a pandemic," said Franklin County Health Director Scott LaVigne, who begged Flowers and other Youngsville officials not to hold the parade or to at least modify their plans to reduce risk.

"Holding any mass gathering event right now is a high risk action. In Franklin County, there are more people with active virus than ever before," he said.

Franklin County saw almost as many coronavirus cases in November as during the seven previous months, LaVigne said, adding that about a quarter of the county’s total infections have occurred in the last two weeks. About 9% of virus tests administered in the county are coming back positive – the state's target is 5% or lower.

“It’s like gasoline on a burning fire. An event like this, while it might not generate that many new cases, it’s more cases that are avoidable," he said. "The safest way to proceed is to not go.”

Flowers said he has received calls asking him to cancel the parade, but he estimated they were outdistanced by supporters by about four to one.

“I think people are just tired of being at home and locked up and just want some freedom back," Youngsville resident Tammy Beale said.

"Just for normalcy in life. We're both essential workers. We never quit working [and] our life has gone on as normal," said another resident Burketta Flobogzian.

Almost 40 local businesses and organizations plan to take part in the parade. However, no county groups, including the fire department and first responders, will be in it.

"We sincerely hope those who attend this parade remain vigilant and disciplined in wearing face coverings and socially distancing from those they don't live with," LaVigne said.