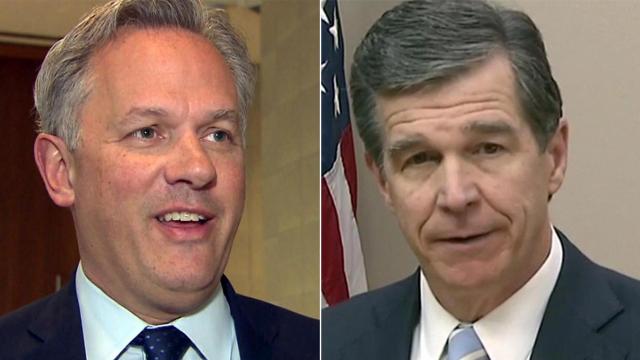 "The governor has repeatedly ignored the law, enacting mandates that selectively target the businesses and citizens of North Carolina without concurrence from a majority of the Council of State," Forest said in a statement.

Forest is running against Cooper in the November gubernatorial election.

"There's no room for politics during a pandemic," Cooper spokeswoman Dory MacMillan said when asked about the pending lawsuit. "The governor will continue to be guided by science and the law as he works every day with public health experts to keep North Carolinians safe."

Cooper has issued a series of executive orders since mid-March shutting down large swaths of North Carolina economy in an effort to limit the spread of coronavirus. The latest order came Wednesday, when Cooper mandated that people cover their faces in public and extended the current phase of the statewide reopening plan for another three weeks.

"The Emergency Management Act requires that you seek and receive concurrence from the Council of State prior to exercising the most expansive statewide emergency powers of the governor," Forest said in a June 25 letter to Cooper.

Cooper's has said previously that state law gives him the power to act during an emergency without consulting the Council of State.

Republicans hold a 6-4 majority on the council, and Forest and other Republican members have openly questioned many of Cooper's shutdown orders.

Two Republican Council of State members said Forest asked them to sign on to the lawsuit, and they declined.

Berry said she hoped the General Assembly would override Cooper's vetoes of bills lawmakers passed to reopen gyms and bars and moot the lawsuit. Lawmakers never took up one override effort, and an override of a second veto failed Wednesday.

"I believed that the General Assembly would be able to handle that and keep it out of the courts," Berry said. "But on the flip side I do wish him luck, because we need to open this economy as soon as possible."

Forest asked that the governor approve Forest's use of his own attorney in the lawsuit because the Attorney General's Office help craft the executive orders he's challenging.