At this rate, January will be the deadliest month of Covid-19 in the US 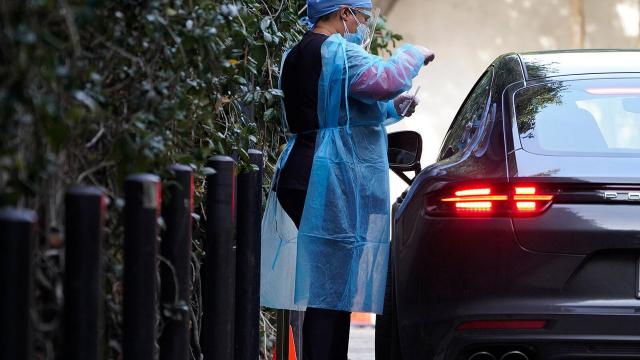 CNN — It took about 90 days for the United States to reach its first 2 million cases of coronavirus last year.

But it took just 10 days to hit 2.2 million cases in 2021, according to data from Johns Hopkins University.

"We know how to slow the spread of the virus. We need mask mandates. We need people to really stay at home and avoid any indoor gatherings."

But officials say many Americans did the opposite over the holidays, gathering with friends or extended family. Now the consequences are becoming more evident in packed hospitals across the country.

At this rate, more people could die from Covid-19 in January than any other month of this pandemic. December had a record high of 77,431 deaths due to Covid-19.

Saturday, the United States suffered 3,655 new Covid-19 deaths, along with 269,623 new infections, according to Johns Hopkins.

US vaccinations are lagging behind expectations

In hard-hit Arizona, the crisis will get worse, said Joe K. Gerald, associate professor at the University of Arizona's Zuckerman College of Public Health.

"We should expect to set new records for cases, hospitalizations, and deaths over the coming weeks. Policy action is urgently needed to mitigate the worst possible outcome," Gerald wrote.

He also expressed concern about "the inevitable arrival of the more highly transmissible" strain of coronavirus that was first detected in the United Kingdom and has spread to at least eight US states, including California, Colorado, Connecticut, Florida, Georgia, New York, Pennsylvania and Texas.

"If it gathers a foothold, it will accelerate, lengthen, and deepen Arizona's outbreak," Gerald said.

Thursday was the first day the US reported more than 4,000 new Covid-19 deaths in a single day.

The toll could get worse as more hospitals fill up.

About 130,777 Covid-19 patients were hospitalized Saturday -- the fifth-highest figure recorded, according to data from the COVID Tracking Project.

The director of the Centers for Disease Control and Prevention said the recent riot at the US Capitol would likely be a "surge event" that "will probably lead to a significant spreading" across the country.

"You had largely unmasked individuals in a non-distanced fashion, who were all through the Capitol," Dr. Robert Redfield told the McClatchy newspaper group.

"Then these individuals all are going in cars and trains and planes going home all across the country right now."

'Our most dangerous time'

In Kentucky, Gov. Andy Beshear said his state was seeing a "real and significant increase in cases and our positivity rate from people's gatherings around the holiday."

"This surge that we're in right now is at least twice the rate, the seriousness, of the previous surges that we have seen," the governor said Friday. "This is our most dangerous time."

Hospitalizations are climbing in Texas, where a record number of Covid-19 patients were reported for the seventh day in a row Saturday. At least 13,935 patients were hospitalized in the state, according to the Texas Department of State Health Services.

And California set two new records Saturday -- the most deaths reported in one day, 695, and the most Covid-19 patients in intensive care units -- 4,939.

"The speed with which we are reaching grim milestones of COVID-19 deaths and cases is a devastating reflection of the immense spread that is occurring across the county," Los Angeles County Director of Public Health Barbara Ferrer said.

"The best way to protect ourselves, slow the spread, and stop overwhelming our hospitals, is to pause participating in any activities that aren't absolutely essential," she said.

"This is just not the time to go to the shopping mall or to a friend's house to watch a basketball or football game."

At this point, the country's only choice is to "vaccinate our way through this," said Dr. Peter Hotez, dean of tropical medicine at Baylor College.

"We are in a race against death right now," Hotez said Saturday. "And that's why we have to accelerate our vaccine program."

President-elect Joe Biden will aim to release nearly all available doses of Covid-19 vaccines in an effort to quickly ramp up the US vaccine rollout, a spokesman for his transition team said.

But it could also be risky, because the vaccines by Pfizer/BioNTech and Moderna require two doses administered weeks apart to be about 95% effective, and vaccine manufacturing has not ramped up as rapidly as many experts had hoped.

The plan is a break from the strategy of the Trump administration, which has held back doses of the vaccines to ensure that second doses are available.

Dr. Celine Gounder, a member of Biden's coronavirus advisory board, told CNN Saturday the new plan aims to "get doses out as quickly as possible" and simplify distribution.

"So long as there are not any manufacturing glitches, we're confident that the supply of vaccine will be there when people return for their second dose," Gounder said.

Asked about the plan, Hotez said he was "all for increasing the number of Americans who get vaccinated." But he stressed that people need to understand the importance of receiving the second dose.

"I'm just worried people may get the wrong message, saying, 'Hey, it's OK to walk around with just a single dose,'" he said, "because that's not the case."

"Whether we will expand to other groups quicker really remains to be seen," she said, adding some states have already deviated from the recommendations.

"I think big picture, the goal here is to get as many people vaccinated as quickly as possible and as safely as possible," she said.