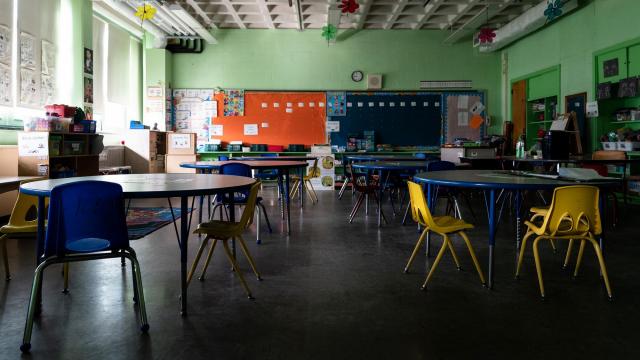 EDITOR'S NOTE: John Railey is the writer-in-residence for the Center for the Study of Economic Mobility. Learn more about the center here.

For years, educators and elected officials across North Carolina have struggled to get the best teachers in the lowest-performing schools, where they are needed the most. Debates on how to do that have raged from school board meetings in rural counties to the legislative chambers in Raleigh. Still, relatively little progress has been made. The COVID-19 pandemic has underscored these inequities, as it has with so many other issues.

The stresses the most vulnerable students face – and that they and their teachers must confront, is now increased by the pandemic. But in some school systems around the state, there is movement on the issue. In Winston-Salem, emerging community leaders are making a fresh commitment to resolving the problem within the Winston-Salem/Forsyth County public school system.

“It’s about the kids,” said Katie Sonnen-Lee, whose two children go to Speas Global Elementary, a Title 1 magnet school in Winston-Salem. “We have to keep the focus on the kids. The kids that need the most should have the best. If we don’t care about giving these kids what they need, then that’s a moral failure on us as a community,” said Sonnen-Lee, vice president of the board of Action4Equity, which pushes for equity in the local public schools.

The teacher issue is complex, she noted, and there is no silver bullet that can solve it.

Solutions have ranged from financial incentives to giving teachers a greater role in decision-making at their schools. A January 2020 report from WestEd, the independent research group directed by state Superior Court Judge David Lee to develop recommendations to meet the Leandro case mandates, found the state has cut funding for teacher training and support.

“North Carolina can never succeed in providing a sound basic education for its children without vastly improved systems and approaches for recruiting, preparing, supporting, developing and retaining teachers and for placing highly effective teachers where they are most needed to foster the academic growth of at-risk students,” the report says. “The current teacher shortages and high turnover – particularly in high poverty schools – are a function of uneven preparation and mentoring, inadequate compensation, and poor working conditions.”

The pandemic, forcing our classrooms into virtual reality, has illuminated how strong teachers are especially needed now, when new pressures include students lacking easy access to the internet.

In Forsyth County, several entities are aligning to tackle the broader issue. Sonnen-Lee’s group, the chairwoman of the local school board, the new school superintendent, The Winston-Salem Foundation, and Winston-Salem State University’s Center for the Study of Economic Mobility (CSEM) are among those involved in the effort. This past winter, CSEM published a paper, “Teachers, Disadvantaged Students and School Performance: The Case of Forsyth County Elementary Schools,” that made clear this issue impacts economic mobility.

“Research regularly demonstrates that disadvantaged children have the greatest need for high-quality teachers,” Research Manager Zach Blizard writes in the paper, which builds on the work of CSEM Research Fellows in exploring equity issues in the school system. “Having an effective schoolteacher, as early as kindergarten, can result in significant increases in lifetime earnings. Since Forsyth County’s disadvantaged children are less likely to benefit from this, they are missing out on valuable opportunities to improve their upward mobility.”

Sonnen-Lee said: “If a kid has a bad teacher for a full year, that’s a year in their life, just the way that it can affect the child’s confidence and their willingness to learn … We have tons of good teachers in the classroom already, but we have some that aren’t that great.”

As the paper was published, Angela Hairston, the new superintendent of the local school system, was continuing her plan to improve the district’s underperforming schools. She removed the principals at several elementary schools and reassigned other principals to those schools. Malishai Woodbury, the chairwoman of the school system board, said one of Hairston’s aims was to get the best leaders and teachers in those schools. That effort will continue in the fall and beyond, regardless of level of virtual or conventional classrooms on which the board decides.

The move was controversial. Tripp Jeffers, a teacher at Parkland High School and a former president of the local chapter of the North Carolina Association of Educators, noted that new principals at the schools received supplements ranging from $25,000 to $30,000 annually from a state program, a big boost to salaries that were already higher than those of teachers. The good teachers who may follow the principals will not receive bonuses.

Blizard wrote that incentives to get good teachers to low-performing schools are a viable strategy if carefully carried out: “The more effective incentives include opportunities to participate in school-level decision making, work for supportive administrators, and join faculties that foster collegial relationships.”

The state legislature once provided incentive funding, then greatly reduced it. State Rep. Donny Lambeth, former chairman of the local school board, said more money from the state is needed, as well an internship program for new principals, recognizing that they are a draw for good teachers. Forsyth school officials say they are already doing that by participating in a national initiative, the Principal Pipeline. Other districts have seen a direct correlation between the program and improving student outcomes in reading and math, according to Karen Roseboro, the instructional superintendent of school transformation and Inspire 340 schools.

The school system is using limited local money for teacher incentives through its Inspire 340 program for low-performing schools. For the 2020-2021 school year, that program offers incentives ranging from $2,500 recruitment bonuses to local salary supplements of up to 14.2 %, Roseboro said.

She added that with the new school year, the local system will incorporate an initiative called “Opportunity Culture” in its Inspire 340 schools. “Opportunity Culture allows WS/FCS’s excellent teachers to extend their reach by leading teams, supporting teachers and students while earning additional pay up to $12,000 annually,” she said in an email to a CSEM writer.

Incentives and better pay are crucial. “Pay them more and even more when they have kids’ test results go up,” said school board member Lida Hayes-Calvert. “Give them the training they need to get ahead. Reward them with additional time off occasionally, with pay, and say ‘thank you’ when their days go well.”

Involving teachers in decision-making is important as well. Tripp Jeffers said teacher turnover has been high in the local system’s low-performing schools. ONE reason is teachers feeling that they are not respected. In the 2018-2019 school year, Roseboro said the system’s overall teacher attrition rate was 13.3% and 18.8% for Title 1 schools, the category that includes low-performing schools.

School board member Marilyn Parker, who volunteers at Cook Literacy Model School, a low-performing elementary school, said teachers sometimes feel a stigma working at such schools, believing they would be more valued at schools with higher performance records. The best teachers at low-performing schools, she said, are passionately dedicated to their work and the children they serve. Incentives and respect from administrators help.

So does a program the system offers, The Teacher Leadership Academy, funded by The Winston-Salem Foundation.

That, coupled with the high teacher turnover rate, constitutes what Roseboro calls a “double-jeopardy” situation. In addition to incentives and the other measures, officials are trying to address the teacher turnover rate through a policy that would have to be approved by the school board, of requiring teachers to stay at a school for three to five years, instead of the current requirement of two years.

Addressing the student turnover rate is even harder. One reason is the city’s high eviction rate – more than 3,000 residents in 2016, according to a Princeton study. Forsyth educators, just as their counterparts in the state’s other urban areas, say they have to help students moving from school to school catch up with their studies and deal with the stress of the moves.

School board member Elisabeth Motsinger said, “Don’t put down teachers as ineffective without understanding that they are on the front lines of all the pain in our society. The issues must be looked at as systems: loss of economic mobility, poor public transportation, lack of access to healthcare. For example, many parents work two jobs, or rely on city buses that take long commutes, and waits between buses limit time available to help their children.”

Delivering more of the best teachers to these students will not be easy. The school system, Sonnen-Lee said, is not going to be fixed overnight. She and others, however, including CSEM researchers, will not back down.