Is it safe for kids to play soccer, other contact sports? 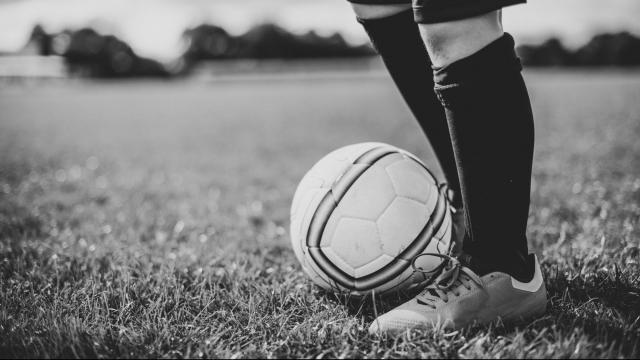 Along with the schools, museums, playgrounds and businesses that shut down in mid-March because of the COVID-19 pandemic, so did sports leagues. For tens of thousands of kids across the Triangle, evenings and afternoons spent on fields, courts and pools came to an abrupt halt as practices and games were canceled, leaving them to mourn lost opportunities and seasons.

By the summer, some sports were practicing again — often in a socially distanced way. But, as the school year began, trainings also ramped up, moving, in some cases, from socially distanced practices to full contact scrimmages, games and tournaments. This past weekend, games for some of the teams in NCFC Youth, the biggest soccer league in the region, began.

While many kids are eager to get back to the field or the court, some parents may be wondering if it's really safe to play contact sports. On Monday, the N.C. Department of Health and Human Services updated its guidance on youth and amateur sports programs with some answers.

It noted that Gov. Roy Cooper's executive order doesn't restrict what types of sports can be played right now, but the agency "strongly recommends only playing sports in which participants can maintain social distancing." Those sports include golf, cycling, disc golf, swimming, singles tennis, running, track and field and dance.

Playing sports where social distancing can't be maintained isn't recommended at all. Those sports include football, group dance, tennis doubles, competitive cheer, basketball, wrestling, hockey and lacrosse. The state recommends that those teams stick to athletic conditioning and drills.

Playing contact sports definitely presents risk, said Emily Sickbert-Bennett, director of infection prevention at UNC Medical Center. It's possible to spread the coronavirus between players as they're fighting for the ball or blocking shots on the court. Outdoor sports may present less risk than indoor ones, she said. Coronavirus particles appear to scatter more quickly when outside. And there's more space to spread out on a soccer field than a basketball court, for example.

But it also depends on how much sustained contact that players have between each other. While soccer is a contact sport, one study this summer found that there is only a "minor risk" of coronavirus transmission during a game. In the Netherlands, officials studied nearly 500 soccer matches to see how often players came in close contact with each other. The study found that 98% of the time, there was very little or no risk that players would transmit the virus to each other,  according to a report in Consultancy.eu.

"I think that is really important," Sickbert-Bennett said. "The amount of time they are really close to each other is minimal. It’s not a no-risk situation. If one of those kids was positive and let out a big cough or puff of air and that happened to be the 10 seconds they were three inches from someone else's face, trying to get the ball away from them, that could certainly be a transmission event. But the majority of their interactions are not like that."

So far, there haven't been any big reports about kids getting sick with COVID-19 while playing youth sports. But in many areas across the country, they are just starting to return to the field, so it may take time to get a fuller answer.

Early reports, so far, don't indicate large transmission rates among youth soccer players, at least. Youth soccer leagues in California this summer found that after holding 143,000 soccer sessions over eight weeks, just 15 confirmed COVID cases were found. Those players contracted the virus from somebody outside of soccer. And in an email to parents on Aug. 31, NCFC Youth announced that players had stepped on its fields 40,000 times during the start of the current season and it had been notified of only four positive COVID cases. Those cases were traced to outside sources too.

Coronavirus cases, however, did impact high school baseball and softball teams, which resumed their seasons in Iowa over the summer, leading some to drop out, according to ESPN. But there were enough remaining teams to still play state championships in both sports.

"You can turn the dial on for soccer, but not turn it on the way soccer used to be fully," she said. "Or, at least, start off a little bit less and see how it goes and see what our community incidence turns out to be another month from now. If things are improving, if you're feeling more comfortable with the interactions, you can turn the dial incrementally. It doesn't have to be just soccer is on, we're going to do it exactly the way we did it before."

Here are steps to consider as youth sports seasons begin.

Socially distanced practices, drills and conditioning are lower risk, she said. So are scrimmages within a team when compared to a weekend tournament. Wearing a mask is another good way to lower the risk of catching the coronavirus. In Michigan, high school football, soccer and volleyball players are actually required to wear face masks during competition.

Wearing a face mask or gaiter may be difficult for some athletes, especially younger ones, to wear during games. But Sickbert-Bennett recommends having one on hand to wear on the sidelines and during half time. A gaiter, which they can wear around their neck throughout the game or practice and can easily be pulled up and down whenever it's needed, may work best, she said.

"It's reasonable for coaches and leagues to ask kids to have a mask available because I can imagine there will be times when the coach needs to talk to them and they can't all be stretched out across the field," she said. "If they have something that is comfortable to wear around their neck, even if they can't keep it up 100% of the time while they're really active, if they have it there and it's easy to pull up over their face while sitting on the bench ... that would be helpful."

Don't go if you're sick

Your child might wake up with what you think is allergies, but if you have any warning signs of COVID, which include fever, cough or shortness of breath, stay home. The CDC has guidelines for players with COVID-19 symptoms.

"Be aware of how you're feeling," she said. "Leagues and coaches can set expectations with families that they are going to be honest about symptoms or exposures within the household and they are going to keep kids home when they need to be home."

Plenty of kids love the camaraderie on the sidelines as much as they love actually playing the sport. But wrestling, tackling and even spraying water bottles at each other probably isn't a good idea right now. Be careful with other shared surfaces too. The state's youth sports guidelines recommend limiting the sharing of equipment and disinfecting items between uses.

Traveling for tournaments presents new risks as you gather in hotel lobbies, eat at restaurants or travel in other ways that may increase your chances of exposure. Being thoughtful about how you travel and what you do when you're there is important. Team meals, for example, may be a no-go. Social distancing, after all, is important on and off the field. "Think of another way of having some team bonding activities outdoors," Sickbert-Bennett said.

Plenty of sports parents rely on elaborate carpool schedules to get kids to and from practice. But, remember, when you carpool, you're inside a small, enclosed area where it can be easier to transmit the coronavirus. "If it's already a close friend that you're spending other time with, that might be different," she said. "Jut be thoughtful about who you're carpooling with."

Keeping the windows open in the car to allow the air to circulate and wearing masks are two ways to lower the risk when riding in the car with somebody else.

Watch your own behavior

Your kids may be doing everything right on the field, but if parents line up their camp chairs right next to each other and cheer on their players without masks on, that's an easy way for coronavirus particles to move from one person to another.

"Just be thoughtful about wearing masks," she said, "There should be space to distance in most cases."

Make your own decision for your family

Getting back to play will depend on your family situation. Some kids may live with adults who are at high risk of developing serious complications from COVID. Others may have a condition themselves such as asthma.

And for other kids, getting back to the field is critical during these unprecedented times when they've been away from friends, school and normal life for so long. Sickbert-Bennett's son, for example, will be playing soccer this season.

"For him, if there's one thing that really would make him perk up, that's the thing that he needs," she said. "So knowing all this, I'm willing to go for it and see how it goes with some of these strategies in place."

As you consider what's best for your family, avoid getting too caught up in the decisions of others, Sickbert-Bennett counsels.