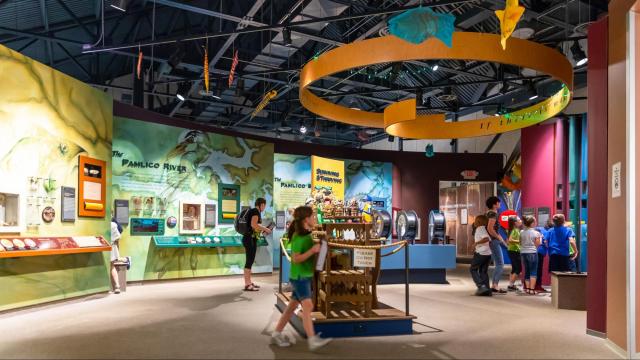 North Carolina has more estuary waters — or rivers and streams that connect to the ocean — than any other state on the east coast.

The Albemarle-Pamlico estuary spans a massive 28,000 square feet, flowing from the Outer Banks to the Raleigh-Durham area, and housing a unique ecosystem like few others in the region.

In Washington, the North Carolina Estuarium — the world's first environmental center of its kind — houses more than 200 exhibits that shed light on the importance of this aquatic system.

"Our exhibits and the interpretive vision that we present combines the science — the nature of estuaries — with a lot of artistic and whimsical touches that create an emotional connection and understanding to this vital natural ecosystem," said Tom Stroud, director of the N.C. Estuarium in Washington. "From just the ecosystem standpoint, North Carolina's estuaries are incredibly important to our state. About 90 percent or more of the seafood species that are caught by North Carolina fishermen spend part of their lives in estuaries. The fact that North Carolina has so much estuary water is a big reason the North Carolina Estuarium exists."

Since opening in 1988, the part-museum, part-aquarium has filled its halls with a diverse array of exhibits. Visitors can learn more about the history of the area through a collection of artifacts, get up-close-and-personal with some of the estuary's aquatic residents, or take a boat tour along the water.

Since COVID-19 hit, however, the estuarium hasn't been open to visitors. To continue providing people with knowledge of North Carolina's estuary system, the environmental center has gone virtual.

"With the virtual tour, it's a highlight of the exhibits that we have, and we go room by room through the museum and talk specifically about everything — from the culture of the region to the flora and the fauna of the area, and then even educate about things like climate science and invasive species like zombie crabs," said Russ Chesson, operations and programming specialist of the N.C. Estuarium and narrator of the virtual tour. "One of the upsides of having to stay home is that we realize that there are these gifts in our communities that we've maybe taken for granted for a while. The idea of the virtual tour was to spark excitement, but also to inspire folks to get out to museums once they reopen."

The virtual tour of the estuarium, filmed by Kurt Dunlow of Dunlow Productions, is posted on Visit Washington's YouTube page and starts with the striking exhibit in the estuarium's lobby — which is coincidentally one of Stroud's favorite parts of the museum. The Rube Goldberg-style machine follows a small blue ball that represents a water droplet as it travels through the water cycle.

From there, Chesson leads viewers through the estuarium, simulating what an actual visit to the museum might look like. The first room focuses on the ecology of the area, highlighting plants and animals that can be found in the estuary waters, from blue crabs to baby alligators.

For Chesson, this room is a highlight of the museum — one worth experiencing in person, when the time comes to do so again.

"The blue crab exhibit is one of my favorites. We have live blue crabs, and you're able to get really up close and personal with them," Chesson said. "Just watching the mechanics and learning about how amazing they are — I love to watch them."

After the ecology room, the tour moves on to focus on the culture and history of the area, highlighting the importance of farming and fishing through a collection of artifacts — including one of the oldest cannons found in North America. The final room centers on environmental issues and protection, from hurricane science to invasive species.

The tour concludes by giving viewers an up close look at Washington's estuary system.

"In the virtual tour, we took out our river-roving boat, and that's a free service that in a regular season we provide to the public. It's about an hour-and-a-half boat ride where we actually get to experience the estuary from saltwater to freshwater," Chesson said. "During the boat ride, we've had everything from ospreys to dolphins swimming through the harbor — which is about as far west as they can go with the brackish water — as well as river otters and beaver lodges. It's really a great opportunity to learn about the estuary inside the building, and then to get to experience it firsthand on the boat ride."

In a typical season, the river-roving tour is free to the public and runs four days a week from April to October. The boat ride takes visitors along the water where the Tar River meets the Pamlico, from Castle Island to the Washington waterfront.

While there isn't a set date for the estuarium to reopen, Chesson and Stroud hope the virtual tour gets potential new visitors excited to see the exhibits and wildlife in person.