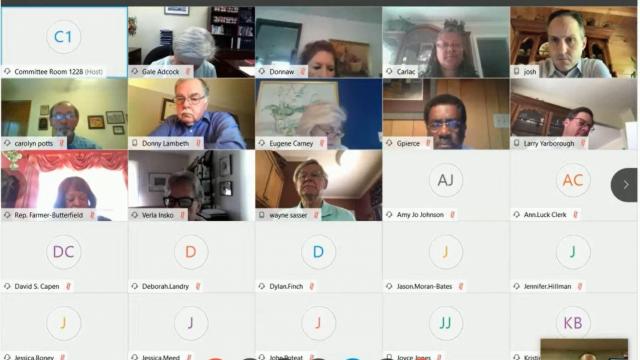 They also made it clear: Not everything will get done during the coming legislative session focused on coronavirus response. There won't be enough state money for everything, nor is there an appetite to tackle long-standing policy issues that may be relevant to the crisis but don't have enough political support to move.

That includes full-blown Medicaid expansion, long a top ask for North Carolina Democrats and a measure that has some support among the House Republican majority but little, at least publicly, in the state Senate.

House and Senate leadership had already made it clear personal protective equipment will be a priority as they allocate state dollars this session, provided supplies can be found to justify spending on harder-to-find items. Leadership is also on record backing a new testing program with state dollars.

But House Speaker Tim Moore said Thursday morning, during a video conference with a House working group, that he supports a temporary, and limited, expansion of Medicaid to pay for COVID-19 testing and treatment.

Treatment would be covered for people earning up to 200 percent of the federal poverty level, roughly $50,200 for a family of four. This would also require a federal waiver, which Gov. Roy Cooper's administration has requested but which remains pending.

Rep. Donny Lambeth, R-Forsyth, a budget co-chair in the House, said he also expects to see funding for rural hospitals, which are struggling with cash flow, in part because elective procedures have been canceled as the state's medical system braces for a surge in COVID-19 patients.

Bills centered on health care issues are likely to come together next week, ahead of an April 28 start to the legislative session. Moore and Senate President Pro Tem Phil Berger announced Wednesday that the public largely won't be allowed in the General Assembly building during the session, though accommodations will be made for press and proceedings will be streamed online.

Lambeth made it clear Thursday that lawmakers need to winnow their priorities ahead of the session's start. The health working group meeting talked through nearly 70 requests for funding or policy shifts, though many of them were mentioned only briefly.

Leadership in the Senate has indicated that it hopes to see unanimous votes on bills that are expected to move quickly through the session, leaving little room for controversial issues.

"There may be things that we would like to include," Lambeth said. "We need to make sure it's focused on the COVID-19 emergency."

Among the policy requests on offer during Thursday's House meeting were:

The American Cancer Society has asked the General Assembly to pass long-discussed legislation that would require insurance companies to cover oral chemotherapy drugs. The society says this would let people more at-risk for COVID-19 because of their immune systems to take their treatments at home.

Lambeth called it "a very good issue," and the measure has passed the House repeatedly. Insurance companies have fought it, though, and the bill has not cleared the Senate.

Rep. Wayne Sasser, R-Stanly, a pharmacist, put a word in Thursday for legislation that would make it easier to fill prescriptions through the mail.

That is another area Blue Cross Blue Shield of North Carolina and other insurance companies have also pushed back against in the past. The House passed lengthy legislation last year dealing with Pharmacy Benefits Managers, but it failed in the Senate.

Lambeth reiterated Thursday that, though this session will start April 28, that day will largely be pro forma, at least in the House. Committees will likely meet via video conference April 29 to firm up bill language, and House floor votes likely will be held April 30, he said.