'Full steam ahead' for Trump's convention? North Carolina has doubts 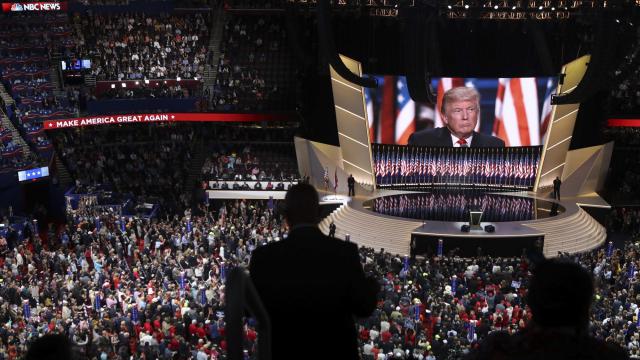 President Donald Trump has made clear that he wants a traditional political convention in Charlotte, North Carolina, in late August, with thousands of sign-waving delegates from out of state filling an arena to acclaim his renomination.

But in North Carolina, they are not so sure. Even the Republicans.

As the relaxing of shutdown orders across the country leads to alarming projections of a surge in coronavirus cases, some leaders of the president’s party in the state that is hosting the convention are striking a less rosy view.

“I think it’s very clear it may not be possible to host a convention as planned,” said Edmund H. Driggs, a Republican member of the Charlotte City Council.

Mecklenburg County, home to Charlotte, is the hardest hit in the state by the virus, with more than 1,900 cases and 58 deaths as of Thursday. Gov. Roy Cooper, a Democrat, announced this week the partial lifting Friday of a stay-at-home order, the first of three phases to reopen the state. But under the governor’s timeline, the full return of businesses and a green light for mass gatherings may not occur before midsummer.

“Clearly if we’re a couple months away from opening businesses in Mecklenburg County, then that would be very difficult to host the convention,” Sen. Thom Tillis of North Carolina said last week.

Tillis, a Republican who has sometimes broken with the president, was responding to a constituent during a telephone town hall event. He said that because hotels and restaurants in greater Charlotte would need to be fully open to accommodate up to 50,000 visitors, “we don’t know yet” if the convention will take place.

That assessment is at odds with Trump’s pledge that the convention, which is scheduled to begin Aug. 24 at the 20,000-seat Spectrum Center, will proceed as planned, as well as with the stated intentions of Republican organizers. Ronna McDaniel, the chair of the Republican National Committee said on Twitter last week that “we are full steam ahead.” She added: “No one who is actually in a decision-making position has discussed alternate plans for our convention.”

The question of whether Republicans will gather for a pull-out-the-stops renomination that Trump craves is bound up in the president’s desire to reverse the economic devastation that threatens his reelection. The national convention is both an actual event and a symbol for people who rarely tune in to political jamborees; for Trump it would be a powerful signal that he is returning the country to normal. Republican lawmakers in some states have moved to curb the influence of public health experts over stay-at-home orders.

On Tuesday, Trump made clear he wanted to reopen the country even at the cost of higher fatalities from the virus.

As the president pivots from containing the pandemic to championing the nation’s economy, experts’ projections of deaths show new spikes. One model the White House has watched closely projects more than 134,000 fatalities by early August, up from about 60,000 under a broad lockdown.

John Bradford, a former Republican state representative from Mecklenburg County, predicted that even if the party was able to hold the convention, it would not be business as usual.

“I’m not convinced any convention is going to look the same for some period of time,” he said. “I’m hopeful we can have some sort of convention, and while it may not be exactly like the past, it’s still exciting for our city.”

Matthew Ridenhour, an alternate delegate from Charlotte, predicted organizers would do “everything they can to deliver” the coronation the president wants, with a balloon drop and televised speeches.

“It’s hard to say how I’ll feel three months from now,” he said of the personal risks that might entail. “I’m relatively young and healthy. I would feel I would have some trust in my fellow delegates that they’re being responsible.”

Charlotte, a Democratic-run city of 870,000, pursued the opportunity to host the convention, eager for the swipes of so many visitors’ credit cards and the bath of national media attention. But even in that pre-coronavirus era of two years ago, the decision was politically polarizing, decided by a one-vote margin on the City Council.

Now, the prospect of thousands of out-of-staters arriving at a time of pandemic sparks trepidation. After a heated debate last week, the council voted 6-5 to accept $50 million from the Justice Department for convention security. One Democratic council member voting no said that “we don’t want to offer up our city as a petri dish” for the next outbreak.

Mayor Vi Lyles, a Democrat, argues that Charlotte is contractually obligated to put on the convention. Taking questions on Twitter last month, she was asked about the virus’ greater impact on African Americans, who make up 35% of the city’s population, and if the convention would still take place.

“I don’t have an answer to say yes or no,” she said. “We will be guided by the best decisions for our residents.”

Driggs, the Republican councilman, is one of the approximately 2,300 alternate delegates (along with about 2,500 main delegates). Although he is not part of the official planning, he said it was likely that contingency plans were quietly underway for a scaled-back event.

“My best bet would be we’ll participate in a highly controlled encounter,” he said. “There’ll be masks, perhaps restrictions on crowds in rooms. It may involve people working in shifts.”

Marcia Lee Kelly, the Republican convention president, said in a statement, “As we have done throughout our planning, we will ensure the convention prioritizes the health and safety of delegates, media, guests and community members.”

On Thursday, organizers named a new adviser for health and safety, Dr. Jeffrey Runge, who was chief medical officer in the Homeland Security Department under President George W. Bush.

Neither party wants to completely abandon a national convention, a gaudy made-for-TV event that seizes the spotlight at a time when most voters are tuning in to the election, even if the polling lift to the nominee has historically been fleeting.

Democrats, who pushed back their convention in Milwaukee from mid-July to mid-August over health concerns, are talking much more openly than Republicans about scaling back the gathering or pulling the plug entirely and doing it online.

Joe Biden, the presumptive nominee, now campaigning virtually from his Delaware home, said last month he was prepared for an entirely online convention.

“I think we should be thinking about that right now,” he said.

The Democratic Party chairman, Tom Perez, has been more circumspect, predicting an in-person gathering. Trump, who mocked Biden’s suggestion of an internet convention, told Fox News in March there was “no way” he would cancel the big rendezvous in Charlotte.

Still, Cooper, the governor, is proceeding cautiously to reopen the state. The first of three phases, which he announced in an executive order, allows for travel to some newly opened businesses, but gatherings of more than 10 people are still prohibited. Phase One runs through May 22; if health metrics turn negative, it could be reversed.

In Phase Two, the stay-at-home order would be lifted and restaurants, hair salons and gyms could serve limited numbers of customers. This period, the governor has said, would last four to six weeks.

Phase Three allows increased traffic to restaurants, houses of worship and entertainment sites, but the size of gatherings is still restricted.

There is no fixed time before Phase Three ends and a mass event like a national convention could take place. But it is unlikely it would end before midsummer, giving the Republicans a short runway ahead of their four-day wingding.

With Trump’s reelection coming down partly to a referendum on his handling of the pandemic, one local Republican on the ballot with the president said he looked forward to a convention that would be one of the country’s first mass gatherings.

“I think it is imperative that someone has to take the first step toward normalcy,” said Jim Puckett, a candidate for county commissioner. “How the Republican Party manages this, I think, will be an indication of whether they’re in a position to lead or not.” Bill Brawley, a former Republican state representative from the county, is a delegate to the convention. He attended the 2016 Republican convention in Cleveland, which he said was as packed as “a rock concert,” something he doesn’t expect in Charlotte.

“I’m not that cynical to think the Republican Party would risk a disaster,” he said. “I think the people organizing the convention will hold it in a responsible manner.”

Brawley, who is running in 2020 to regain his old seat, said his wife has an underlying health condition that makes her vulnerable to the coronavirus.

“The question is when August comes, can I attend the convention in a way that does not put my wife at risk?” he said. “And if I can, I will. If I do not have confidence that those issues have been addressed, I reserve the right not to go to protect my wife’s life.”