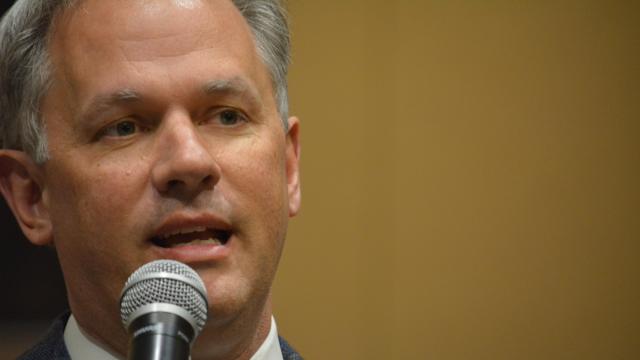 Raleigh, N.C. — Some Republican lawmakers stepped up criticisms of Gov. Roy Cooper over the last two days, pressuring him in the wake of a ReOpenNC protest to release more information and lay out a plan to open the state's economy.

Lt. Gov. Dan Forest, Cooper's competition for the governor's mansion in November, was particularly vocal, saying in a statement Wednesday that "it is time for Gov. Cooper to have a sense of urgency to reopen our economy" and pointing to movement in South Carolina, Tennessee and Georgia.

Forest also called for "an offensive game plan" during a half-hour interview Tuesday with a media outlet based in Lenoir County and run by the former mayor of Kinston.

“My opinion is we’re getting real close to getting life back to normal," Forest told NeuseNews.com.

Forest has spoken with ReOpenNC organizers and said he held a video conference with them Monday, ahead of the Tuesday protest that drew an estimated 1,000 people to a march around the governor's mansion and state Legislative Building. The group has called on Cooper to drop all executive orders closing businesses around the state by May 1.

The governor is expected to lay out at least some of his reopening plan Thursday, but he's said previously it will be more like turning a dimmer switch than flipping on the lights. Cooper said last week, and again during a Tuesday press conference, that the state needs to expand virus testing, boost public health staff to do contact tracing on people who test positive and see a downturn in state infection rates before moving forward.

"We want to ease restrictions on the economy and on families," Cooper said Tuesday.

Cooper's secretary of health and human services, Dr. Mandy Cohen, said in Tuesday and Wednesday briefings that the state has reworked testing protocols to boost those numbers. New jobs haven't been posted yet to do the contact tracing, but Cohen said she hopes to announce a partnership by the end of this week or early next with a company to bolster the 250 public health workers already doing that work in the state.

Every Republican state senator signed a letter to the governor on Tuesday that begins by thanking him.

"Your decisions to date have evidenced a deep concern about public health, and that focus should never change," it states.

But the letter goes on to ask for more details and a plan to reopen the state, including more specifics on how much testing is needed before things can move forward. That's one of the key questions WRAL News and other media outlets have been asking at daily state briefings on the crisis.

The senators also asked how much personal protective equipment – the masks, gowns and other gear hospital and other front-line workers need to protect them – the state has on hand, and how much it needs.

The letter also calls for movement.

"With respect," it states, "why haven’t you communicated a step-by-step plan to reopen our economy and put North Carolinians back to work?"

Forest keyed on PPE needs during part of his Tuesday interview with NeuseNews.com and wondered why the Cooper administration has had trouble getting it.

"I've talked to manufacturers, had manufacturers call me," Forest said. "Just dozens and dozens of emails and texts and phone calls from people saying we have all of this PPE ... [and] all you've got to do is get us in touch with the right people."

Forest said he passed the contacts on to the administration and that most people didn't hear back. But when asked to provide those contacts, Forest's office largely declined, at first saying it amounted to an open records request and would have to get in line to be filled.

WRAL News has at least two other open records requests pending with the Lieutenant Governor's Office from last summer, and the office's policy is to fill them in the order received.

Forest's chief of staff and general counsel, Steven Walker, passed on a couple of names after making sure they were willing to be contacted. One declined to discuss the issue on the record. Another returned an initial call, but attempts to connect for an interview Wednesday were not successful.

The state Division of Emergency Management and Department of Health and Human Services have been inundated with emails from various vendors offering PPE items and tests. Emergency Management Director Mike Sprayberry said Wednesday that the state has put in orders totaling $280 million and has received about 5 percent of it.

"Many vendors do not actually have stock immediately available," he said.

There's a wide variety of PPE, including different kinds of masks and gowns with different protective levels, and a range of entities that need them. Sprayberry said the state has a team vetting offers and that they've looked at nearly 600 vendors, with another 300 in the queue.

He said 76 individual requests for delivery came in from hospitals and other outfits Tuesday, not including local law enforcement and fire departments. The state had 160 requests from them, he said.

In that video, Weatherman said Forest has donated some $200,000 from his campaign accounts to help people dealing with COVID-19. Campaign spokesman Andrew Dunn declined to name the recipients, but they should be listed in the campaign's next state filing, which is due in July.

Yadkin Valley Strong Executive Director David Steelman confirmed Wednesday that his group got $5,000. The group raises and distributes money to people who have lost their employment because of the pandemic.

Steelman said Forest visited several weeks ago and, "I was kind of shocked because I'd never met him before."

"We just found it astounding that he drove all the way from Raleigh and presented the check and drove back to Raleigh," he said.

At least two prominent North Carolina conservatives have written the governor letters, calling on him to move toward reopening.

Bob Luddy, the former chairman at the Civitas Institute, published an open letter to the governor last week in The American Spectator, a conservative online magazine.

"Every week you make life more difficult with more onerous regulations," he wrote. "This is an urgent appeal to consider the destruction your orders are causing compared to the purported benefits."

Temple Sloan, a Republican appointee to the UNC Board of Governors, said in a letter first reported this week by Business North Carolina that people "need to hear a clear strategy to reopen the state's economy."

"This strategy should maintain the progress we have made to slow the spread of the virus, while also defining a path to recovery," he wrote. "This must happen quickly."

Many protesters did not, violating the 6-foot social distancing rule during the demonstration.

The News Herald, in Morganton, reported last week that group organizer Ashley Smith said she's been taking guidance from Forest. Smith told WRAL News Wednesday that she's been following the lieutenant governor's public comments closely, particularly since he questioned the validity of Cooper's ongoing restaurant ban, but "I'm not taking guidance from anyone."

"I might have been guided by his public positions, but I have not personally taken guidance from him," Smith said.

"I think we should do it the other way around," and expect people to show personal responsibility, he told NeuseNews.com.

U.S. Sen. Thom Tillis has consistently complimented Cooper's handling of the crisis, including during a Wednesday morning town hall with constituents.

During the hour-long call, none of the callers pressed for a faster reopen.

"Please tell me North Carolina's not even considering that," one woman said. "We are not even close."

Public polling indicates Americans prefer a wait-and-see approach on reopening the economy. Seventy-six percent of respondents in a Morning Consult / Politico poll said people should social distance as long as needed, even if it means continued economic harm.

Tillis said Wednesday that "once we get to the peak, which could be days or even weeks away ... we're going to allow more movement." But that's if people take things seriously, he said, social distancing on their own and wearing masks.

"So much of that depends on everybody else doing their part," he said.

If people don't, "then the governor's going to look at that and say I can't relax decisions," Tillis said. "The governor is going to be tasked with making a life-and-death decision."