Forest, back on the campaign trail, draws maskless crowd in Statesville 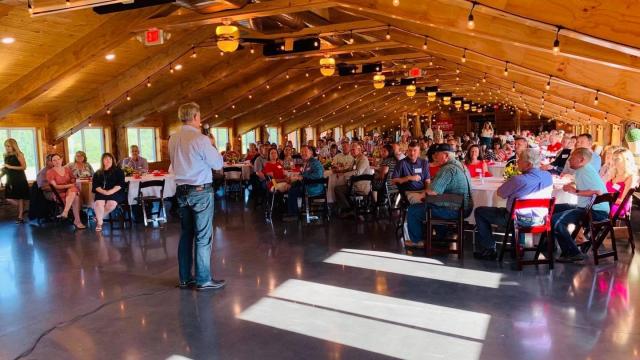 Statesville, N.C. — Republican Lt. Gov. Dan Forest is holding in-person campaign events again, and he drew a crowd of more than 100 people Tuesday to an indoor event in Iredell County.

His gubernatorial campaign posted a picture of the event to Facebook. People are seated 10 or so to a table and don't seem to be wearing masks.

"Huge turnout tonight in Iredell Country!" the campaign wrote on its Facebook page. "People are ready for a change in leadership."

The state is under an executive order that generally requires masks in an effort to stem the transmission of coronavirus. There's also a ban on mass gatherings – no more than 10 people indoors and 25 people outdoors – courtesy of orders signed by Forest's Democratic opponent in the November elections, Gov. Roy Cooper.

As of Wednesday, Forest's campaign website lists 18 events between now and Sept. 24. Some of them are indoors, where transmission risks are likely higher. Several include this disclaimer: "Section 4 of the governor's most recent executive order exempts 'activities constituting the exercise of First Amendment rights.'"

It does indeed, though the same section of that order strongly urges organizers to embrace social distancing and to avoid mass gatherings altogether.

As lieutenant governor, Forest occasionally presides over the state Senate, and he was on the chamber floor as the body met last week. Sen. Danny Britt, R-Robeson, who was also in the chamber, tested positive the next day for coronavirus.

Britt said in a text message Wednesday that he didn't have close contact with Forest that day and that the only people he spoke with were senators he sits next to in the chamber, both of whom have tested negative. Other than Britt, there are no other known positives among General Assembly members or staff.

Forest's campaign spokesman didn't respond to requests for comment Wednesday. When someone on the campaign Facebook page questioned Forest's leadership because of the maskless event, the campaign responded with a picture of Roy Cooper, a mask loose around his neck as he walked toward an entrance to the governor's mansion last month after meeting with protesters gathered outside. 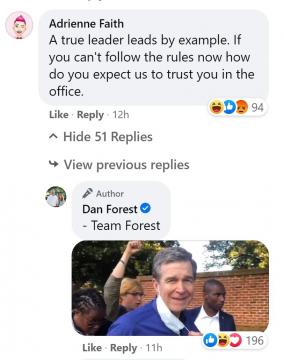 A number of Republicans have complained that their events generate more criticism over potential coronavirus transmissions than the recent mass protests over racism and policing. Those protests have generally been outdoors, with many protesters wearing masks.

They're still considered a transmission risk, though state officials have said in recent weeks that they don't know of cases that tie back to protests.

Forest has downplayed the pandemic, and he recently said that masks "do not work with viruses." The head of the Centers for Disease Control and Prevention was in Charlotte Monday, urging people to wear masks and calling them "our major defense."

"You can't emphasize it too much that actually face coverings work," Dr. Robert Redfield said. "If all of us would put on a face covering now for the next four weeks to six weeks, I think we could drive this epidemic to the ground."

The Cooper campaign has a commercial airing now blasting Forest for his mask comments and other coronavirus positions. Among other things, Forest has courted support from the ReOpenNC group, which has protested Cooper's shutdown orders at times by burning masks.

Forest has also sued the governor over coronavirus shutdown orders, saying Cooper overstepped his authority by pressing ahead on some things without consensus from the Council of State, a group of statewide elected officials that includes the lieutenant governor.