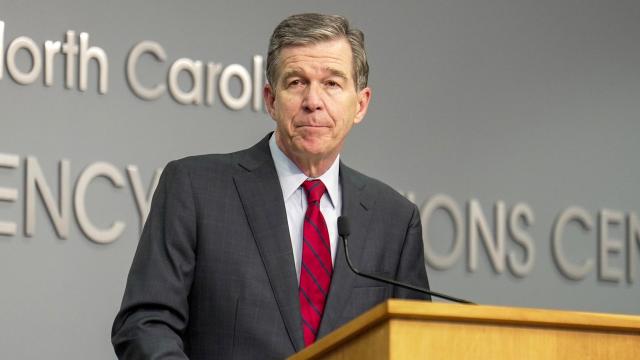 When North Carolina Gov. Roy Cooper first announced efforts to have most state employees vaccinated against Covid-19 or tested weekly, his directive made clear workers could be fired if they didn’t comply.

“Until more people get the vaccine, we’ll continue living with the threat of a very serious disease,” Cooper said in a July 29 news conference.

But more than five months later, efforts to encourage state employees to get vaccinations have been mixed. Two departments lag behind the 70% vaccination rate of all North Carolina adults, and the state has seldom made good on Cooper’s dismissal threat.

State agencies have wide enforcement latitude, with many choosing not to fire a single person. In one department where inmates are being vaccinated at greater rates than prison officials, public safety workers are now receiving hundreds of dollars in bonuses if they get their shots.

Your Voice: What incentives would convince you to get COVID vaccine?

North Carolina agencies say they are taking a measured approach to compliance, with firings being a last resort. Through Friday, 32 workers had been fired since Cooper’s July announcement, a dismissal rate of 0.06%, according to data the Office of State Human Resources provided to WRAL News. Most of the dismissals have come in the state health department.

Cooper’s order covers more than 53,000 employees. Seventy-seven percent of them are now fully vaccinated, up 12 percentage points since the state began sharing data in September.

The rarity of dismissals and hurdles the state faces in persuading the unvaccinated illustrate the challenges confronting state governments in retaining workers who may be hard to replace while also preventing their employees from contracting Covid-19 and spreading it to others.

“The governor appreciates that most all employees have complied with vaccination or weekly testing, both of which protect people in the workplace,” Jordan Monaghan, a spokesman for Cooper, said in a statement.

Jamie Kritzer, a spokesman for the North Carolina Department of Transportation, said more than 1,000 employees in the department have been vaccinated at clinics within their workplaces since Cooper’s order was implemented in September. But data from the state human resources office shows a five-point bump in fully vaccinated workers from 60% to 65% over the last three and a half months, far less than the statewide increase of 12 points. DOT remains the least vaccinated agency under Cooper’s order. About 3,200 DOT workers are not fully vaccinated.

North Carolina’s Department of Public Safety is giving $500 bonuses to prison system workers who become or already have been fully vaccinated. Jill Lucas, a spokeswoman for North Carolina’s human resources office, said DPS is the only agency presently offering such an incentive to its workers.

Among the 14 agencies subject to Cooper’s directive, DPS is the largest in size and has the second lowest share of workers vaccinated at 68%, as of Dec. 30. That leaves 6,300 employees not fully vaccinated—accounting for more than half of all state employees without all their shots.

Just 63% of correctional officers and other prison staff are fully vaccinated, according to data from the department. Meanwhile, 74% of DPS inmates have received a second Pfizer or Moderna shot or the one-shot Johnson & Johnson vaccine.

In NC prisons, inmates much more likely than staff to take vaccine

“It’s not for lack of trying,” John Bull, a DPS spokesman, said of the low rate for employees. “There has been marginal improvement in the number of staff who have elected to become fully vaccinated.”

State agencies first shared their vaccination rates with the state’s human resources department nearly four months ago. Cooper said last week he’d soon update his directive to adjust the meaning of “fully vaccinated” to apply to those who have gotten a booster.

Bull said more than 6,500 prison workers were eligible to receive $500 when the first wave of payments were sent out last month. The perk comes at a time when employees across the country have more career opportunities and less desire to work in an environment that makes them unhappy.

Other states, eager to boost vaccination rates among their employees, have also resorted to financial incentives to entice workers.

In Pennsylvania, Democratic Gov. Tom Wolf’s administration announced last fall that it would give vaccinated state workers five paid days off or a lump sum value of those days. Maryland Republican Gov. Larry Hogan said in May 2021 that the state would give $100 to all state employees who provide proof they are fully vaccinated against Covid-19 and agree to receive any subsequent recommended boosters within 18 months of being fully vaccinated.

Such sweeteners may prove more effective than the threat of disciplinary action.

Dan Bowling, a Duke University labor and employment professor who previously led human resources for Coca-Cola Enterprises’ 88,000 employees, said government-imposed vaccine mandates are legally questionable and make little business sense at a time when companies are struggling to fill vacancies, though he acknowledged it may help get workers who were torn on getting the vaccine to finally act.

“It isn’t smart to be putting barriers,” Bowling said. “I would be removing barriers to work when we have a labor shortage, particularly in critical industries, such as law enforcement and health care.”

At DPS, where roughly 2,000 prisoners leave the system and another 2,000 enter in a given month, Bull said officials are doing their best to retain workers while also complying with the directive.

“DPS uses a step-by-step pre-disciplinary process where people who are overdue for testing have direct contact from Human Resources staff, are given education about the vaccination-or-testing policy and are given the opportunity to come into compliance,” Bull said in a statement. “Through that process, many people start following the policy, so they do not need to have any disciplinary action taken against them. We want to retain the employee and continue to benefit from their skills and knowledge while also making sure they are in compliance.”