FDA Grants Emergency Authorization of Antibody Treatment Given to Trump 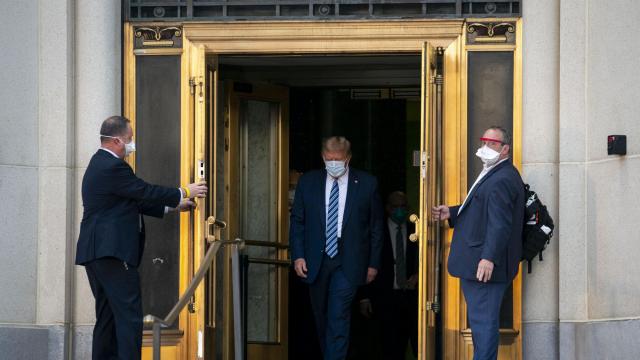 The Food and Drug Administration has granted emergency authorization for the experimental antibody treatment given to President Donald Trump shortly after he was diagnosed with COVID-19, giving doctors another option to treat COVID-19 patients as cases across the country continue to rise.

The treatment, made by the biotech company Regeneron, is a cocktail of two powerful antibodies that have shown promise in early studies at keeping the infection in check, reducing medical visits in patients who get the drug early in the course of their disease. A similar treatment, made by Eli Lilly, was given emergency approval earlier this month.

The emergency authorization for Regeneron’s drug is limited in scope: It is for people 12 and over who have tested positive for the coronavirus and who are at high risk for developing severe COVID-19. Evidence so far suggests that antibody treatments work best early in the course of the disease, before the virus has gained a foothold in the body. Like Eli Lilly’s treatment, Regeneron’s is not authorized for use in people who are hospitalized or who need oxygen.

The emergency authorization raises immediate questions about who will get access to the treatments as an average of more than 168,000 people are diagnosed each day with COVID-19 in the United States and hospitals are running out of beds in some regions of the country. Regeneron has said it will have enough of the drug for only about 80,000 people by the end of November, enough for 200,000 patients by the first week of January, and 300,000 by the end of January. After that, the company said, it will be able to ramp up production thanks to a partnership with Swiss manufacturer Roche.

Regeneron has received more than $500 million from the federal government to develop and manufacture the treatments, a complex and time-consuming process. Although the first 300,000 doses will be provided free, patients may be charged for having the treatment administered; it must be infused in a clinic or hospital.

Antibody treatments have gotten less attention than vaccines, but health officials have long held out hope that they may serve as a possible bridge until a coronavirus vaccine is more broadly available. Two vaccines, one made by Pfizer and another by Moderna, were recently shown to be more than 90% effective in early analyses. Pfizer, which has completed its trial, submitted an application Friday for emergency authorization of the vaccine, and Moderna said it planned to apply soon. Still, it will be weeks before a vaccine is available, and even then, access will be limited to people in high-risk groups.

Dr. George Yancopoulos, Regeneron’s president and chief scientific officer, said in a statement that he was encouraged by the recent vaccine results but that “there remains a need to treat patients who develop COVID-19, especially as some may not have had access to or were not protected by vaccination.”

Regeneron enjoyed a burst of publicity in October, when Trump received an infusion of its cocktail and then enthusiastically promoted the drug as lending him a superpower-like feeling. In a video released Oct. 7, the president claimed without evidence that it had cured him and that he had authorized it — something he does not have the power to do.

It remains impossible to know whether the Regeneron treatment helped Trump. He was given multiple drugs while at Walter Reed National Military Medical Center, and many people recover from the virus on their own.

Since the spring, White House and health officials have been closely watching the development of the antibody treatments. In addition to Regeneron’s deal with the federal government, Eli Lilly announced a $375 million deal in October to supply the government with 300,000 doses.

A similar antibody treatment that Regeneron developed to fight Ebola was approved by the FDA in October, bolstering confidence that its COVID-19 version would prevail in the ongoing trials of outpatients.

The president and two of his top advisers — Mark Meadows, the White House chief of staff, and Jared Kushner, Trump’s son-in-law — have called Dr. Stephen Hahn, the FDA commissioner, to press for speed in agency reviews. And Dr. Leonard Schleifer, the billionaire co-founder and chief executive of Regeneron, who has known Trump casually for years, has told associates that Trump calls him to ask about the status of the treatment.

Early data released by Regeneron suggest that its cocktail works best in people who do not appear to be mounting an early immune response to the virus, or who have high levels of the virus, and who are therefore at greater risk of faring poorly. But early evidence also shows that the antibody treatments do not work well once people are sick enough to be hospitalized. Eli Lilly stopped giving its treatment to hospitalized patients in a government-run trial because, it said, it did not seem to be helping those patients. And Regeneron paused enrolling the sickest hospitalized patients in one of its trials.

This causes a challenge for distributing the drugs, since they are only authorized for people who are not hospitalized yet must be infused intravenously in a clinic or hospital.

Regeneron has suggested that the people who benefit the most from the treatment are those who have not yet mounted an antibody response and who also have high viral loads — but learning who those people are would require separate tests that are not routinely given to patients who test positive for the virus. Company executives have acknowledged that at first, such tests may not be available, and the emergency authorization notes that people at high risk include those who are over 65 or have underlying conditions such as obesity or diabetes.

Getting the treatment to the right people will require quick turnarounds in testing, as well as coordination among federal, state and hospital officials — many of the same challenges that have complicated the U.S. response to the pandemic.

The distributor AmerisourceBergen will deliver Regeneron’s treatment on a weekly schedule based on the number of COVID-19 cases in each state. The federal government plans to work with state health officials to determine which hospitals and clinics should receive it.

In a call with reporters this month to outline how the Eli Lilly treatment would be distributed, Janet Woodcock, a top federal drug official, said the administration was working with hospitals and infusion companies, and acknowledged the logistical complexity of a drug that takes an hour to administer, followed by an hour of observation. The hospitals and clinics will also have to figure out how to safely treat infectious patients without exposing other people to the virus.

“We’re all going to need to get the word out that people at high risk have a therapeutic option now as outpatients, because until this point people have been told to stay home unless they get very sick,” she said.

The emergency use authorization, or EUA, was previously an obscure corner of regulatory law that mostly escaped broad public attention. But during the pandemic, it has become a centerpiece of the administration’s health policy: Since February, the agency has granted hundreds of emergency authorizations related to COVID-19, many for diagnostic tests and others for personal protective equipment, blood-purification devices, ventilators and therapies.

In signing off on the emergency authorizations, FDA scientists in the agency’s Office of Infectious Diseases had to weigh the need for clear evidence that the treatments worked with the increasing desperation for useful drugs as the pandemic accelerated again in the United States. Unlike a full FDA approval, which requires a rigorous vetting of clinical trial data showing a drug is safe and effective, an emergency authorization simply requires the potential benefits of a drug to outweigh its risks.

The emergency authorization for Regeneron may still have the unintended effect of complicating the role of clinical trials in proving the treatment’s effectiveness for different age groups. If the drug becomes available more broadly, fewer people may want to sign up for clinical trials and risk the possibility that they may receive a placebo.

Regeneron’s clinical trials are continuing in hospitalized patients as well as in studies looking at whether the treatment can prevent infections in people who have been exposed to someone with COVID-19.