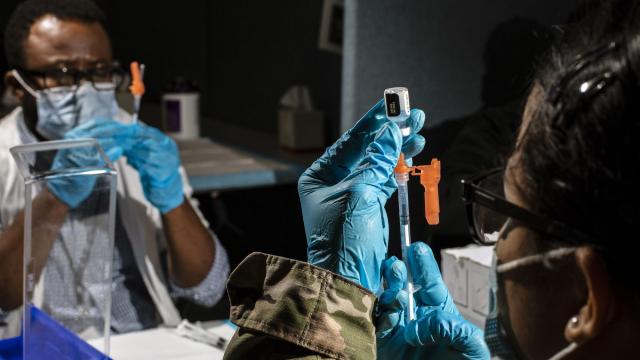 WASHINGTON — With a new surge of COVID-19 infections ripping through much of the United States, the Food and Drug Administration has accelerated its timetable to fully approve Pfizer-BioNTech’s coronavirus vaccine, aiming to complete the process by the start of next month, people involved in the effort said.

President Joe Biden said last week that he expected a fully approved vaccine in early fall. But the FDA’s unofficial deadline is Labor Day or sooner, according to multiple people familiar with the plan. The agency said in a statement that its leaders recognized that approval might inspire more public confidence and had “taken an all-hands-on-deck approach” to the work.

Giving final approval to the Pfizer vaccine — rather than relying on the emergency authorization granted late last year by the FDA — could help increase inoculation rates at a moment when the highly transmissible Delta variant of the virus is sharply driving up the number of new cases.

A number of universities and hospitals, the Defense Department and at least one major city, San Francisco, are expected to mandate inoculation once a vaccine is fully approved. Final approval could also help mute misinformation about the safety of vaccines and clarify legal issues about mandates.

Federal regulators have been under growing public pressure to fully approve Pfizer’s vaccine ever since the company filed its application on May 7.

“I just have not sensed a sense of urgency from the FDA on full approval,” Dr. Ashish K. Jha, dean of the Brown University School of Public Health, said in an interview Tuesday. “And I find it baffling, given where we are as a country in terms of infections, hospitalizations and deaths.”

Although 192 million Americans — 58% of the total population and 70% of the nation’s adults — have received at least one vaccine shot, many remain vulnerable to the ultracontagious, dominant Delta variant. The country is averaging nearly 86,000 new infections a day, an increase of 142% in just two weeks, according to a New York Times database.

Recent polls by the Kaiser Family Foundation, which has been tracking public attitudes during the pandemic, have found that 3 of every 10 unvaccinated people said that they would be more likely to get a shot with a fully approved vaccine. But the pollsters warned that many respondents did not understand the regulatory process and might have been looking for a “proxy” justification not to get a shot.

Moderna, the second most widely used vaccine in the United States, filed for final approval of its vaccine on June 1. But the company is still submitting data and has not said when it will finish. Johnson & Johnson, the third vaccine authorized for emergency use, has not yet applied but plans to do so later this year.

Full approval of the Pfizer vaccine will kick off a patchwork of vaccination mandates across the country. Like most other employees of federal agencies, civilians working for the Defense Department must be vaccinated or face regular testing. But the military has held off on ordering shots for 1.3 million active-duty service members until the FDA acts. The city of San Francisco has said its roughly 44,500 employees must be fully vaccinated within 10 weeks of FDA approval. The State University of New York, with roughly 400,000 students, is on a parallel track.

A number of health care systems have issued similar mandates to employees, including Beaumont Health, the largest health provider in Michigan, with 33,000 employees, and Mass General Brigham in Massachusetts, with about 80,000 workers.

Full approval typically requires the FDA to review hundreds of thousands of pages of documents — roughly 10 times the data required to authorize a vaccine on an emergency basis. The agency can usually complete a priority review within six to eight months and was already working on an expedited timetable for the Pfizer vaccine. The FDA’s decision to speed up was reported last week by Stat News.

In a guest essay in The New York Times last month, Dr. Peter Marks, the agency’s top vaccine regulator, wrote that undue haste “would undermine the FDA’s statutory responsibilities, affect public trust in the agency and do little to help combat vaccine hesitancy.”

The regulators want to see real-world data on how the vaccine has been working since they authorized it for emergency use in December. That means verifying the company’s data on vaccine efficacy and immune responses, reviewing how efficacy or immunity might decline over time, examining new infections in participants in continuing clinical trials, reviewing adverse reactions to vaccinations and inspecting manufacturing plants.

At the same time, senior health officials at the FDA and other agencies are grappling with whether at least some people who are already vaccinated need booster shots. Several officials are arguing that boosters will be widely needed before long, while others contend that the scientific basis for them remains far from settled.

Two people familiar with the deliberations, speaking on the condition of anonymity, said that if booster shots are needed, the administration wants a single strategy for all three vaccines currently authorized for emergency use.

Different recommendations on boosters for different vaccines, they said, could confuse the public. Fully approving a vaccine and then authorizing a booster for it soon after might also offer conflicting messages about its effectiveness.

While research is continuing, senior administration officials increasingly believe that at the least, vulnerable populations like those with compromised immune systems and older people will need them, according to people familiar with their thinking. But when to administer them, which vaccine to use and who should get shots are all still being discussed.

In a study posted online last week, Pfizer and BioNTech scientists reported that the effectiveness of Pfizer’s vaccine against symptomatic disease fell from about 96% to about 84% four to six months after the second shot, but continued to offer robust protection against hospitalization and severe disease. Administration officials said Moderna and Johnson & Johnson needed to present data as well and Moderna had been asked to do so quickly. Officials have said other studies will also influence their decision-making, including data that the government is collecting on the rate of breakthrough infections among tens of thousands of people, including health care workers.

Pfizer is expected to submit an application for a booster shot to the FDA this month. While the FDA could authorize such shots, the Centers for Disease Control and Prevention would need to recommend them after a meeting of its outside committee of experts.

A decision to fully approve Pfizer’s vaccine will give doctors more latitude to prescribe additional shots at least for certain Americans, including those with weakened immune systems. The CDC had been exploring possible special programs for that group, but administration officials said it became clear that by the time any such initiative got underway, the Pfizer vaccine would already be fully approved and doctors could prescribe a third shot.

Roughly 3% of Americans — or about 10 million people, by some estimates — have compromised immune systems as a result of cancer, organ transplants or other medical conditions, according to the CDC. While studies indicate that the vaccines work well for some of them, others do not produce the immune response that would protect them from the virus.

Some people are trying to get booster shots from pharmacies or other providers on their own, without waiting for the federal government’s blessing. Officials in Contra Costa County, home to 1.1 million people in Northern California, were so eager to offer boosters that on July 23 they told vaccine providers to give extra shots to people who asked for them “without requiring further documentation or justification.”

Then, realizing that policy violated the FDA rules on vaccines authorized for emergency use, the county reversed it this week.